ICA opens in Milan with 'Apolo.. 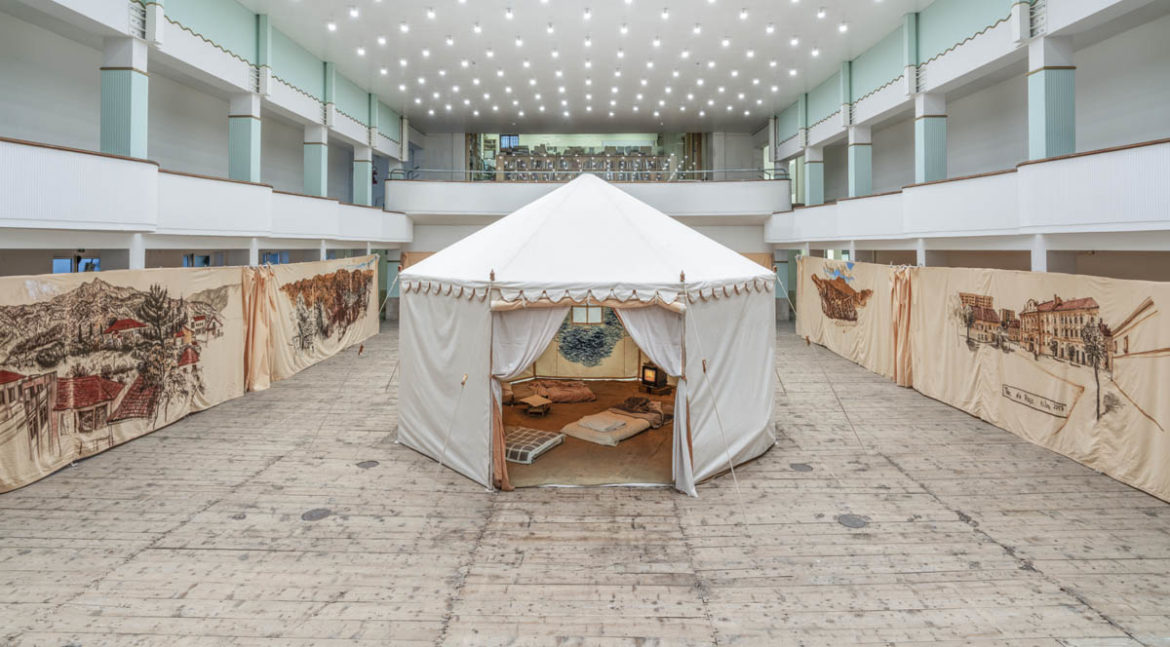 Travels, disguises, discoveries, memories, new techniques, new interpretations, new horizons, all this and more in the new exhibition of the Galleria Continua in San Gimignano from 26 January to 7 April 2019. Artists from four countries. The Afro-American Nari Ward, the Indian Nikhil Chopra, the Florentine Giovanni Ozzola, and the Russians Ilya & Emilia Kabakov. 4 different nationalities and 4 ways of understanding art. That chameleonic way of Nikhil Chopra, the philosophical scientific one of Giovanni Ozzola, the conceptual one of Kabakov, and that of the reuse and reinterpretation of materials by Nari Ward.

In the works presented at the Galleria Continua Nari Ward confirms the use of waste material found and collected in his neighborhood such as strollers, shopping carts, bottles, doors, televisions, cash registers and shoelaces, associating them, bringing them together in a surprising way. In this case after working in Santa Croce sull’Arno, an important manufacturing center that founds its economy on the processing and export of leather, we have the works entitled Down Doors in which elements absolutely distant from each other live together, old doors, pockets, feathers, parachutes. Brutal works in their pose as the unmade bed of Tracey Emin. But here, with variations on the theme (Sea Green, Maroon, Qing, Cream, Stage) the works leave us stunned about the meaning we have to give to which we are called to find an interpretation. Doors fallen from the sky with a parachute? The feather bags piled on the doors serve to muffle the noise outside? Dreams, silence, lightness, modest dignified work, brought to heaven? Or as he says “The door is an object that, when in use, suggests a space of transition from one place to another”. The artist then uses objects that speak of the communities and the place where he is working at that moment as he did in a previous work, Amazing Grace, with 365 discarded strollers. While with shoelaces Ward writes and draws. The piece of lace that comes out of the wall is a line and with many lines the artist creates intriguing images, even the bones painted at their ends of red with lipstick combine life and death, eros and thanatos, the poverty of the material and the richness of result displayed on iron supports already in itself of great elegance.

For years Ilya & Emilia Kabakov transport us between the personal and the political, between their private life and the condition of post-Stalinist Russia, between the drama and the irony between 1935 and 1984. With The Eminent Direction of Thoughts the Kabakov accompany us along a strip of memories of their existence. On the sand a rope carries objects and sheets written with annotations of highlights. Thus between visual and verbal elements it is the universal condition of the human being that comes out with all the dramatic and ironic aspects. Inside the other room, from a chair colored ropes start upwards where a light bulb makes a light of infinite poetry raining in the darkness that has much to do with what Kabakov himself says: “On the other hand, very early in my life, I learned to combine reality and fantasy and to live both. Our life is based a lot on this combination (…)”.

Giovanni Ozzola‘s work ranges from one end of knowledge to the other. Fishing in astrology as in botany, in discourses on the human body as in the whole universe. He practices photography as well as the tear of the fresco but reinterpreting it in his own way, reversing it, playing on positive negative, creating reliefs where there were ditches, repainting asphyxiated surfaces removed from badly frequented places, with silicone, paint, and wire mesh. In the same way he engraved metal plates with drawings of islands, stellar paths, supposed worlds, then filling these grooves in aluminum engraved with bronze wire. Photographed petals fallen on the pavement in Fallen Blossoms proposing them in micro dimensions as well as maxi proposes a flood of light from a window door in front of which stands the back figure of the partner.

Nikhil Chopra with Drawing a Line through Landscape reproposes the work done for Documenta Kassel going from one location to another, from Athens to Kassel passing through 3,000 kilometers through very different countries for political choices characterized by populism, nationalism and feelings xenophobic, trying to unify them in a single landscape. Camouflaging and sometimes presenting the most diverse characters with irony, or underlining the dramatic aspect of that being. The theater-cinema space is dominated in the middle by the tent and the motorbike used for his long journey. On the walls all around the sheets, let’s call them Teleri as in the art of the sixteenth century, painted during the trip. In the contiguous room the photos of the characters above. In addition, in the other two rooms 2 videos (50′) with performance and installation from documenta 14. 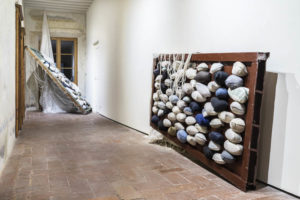 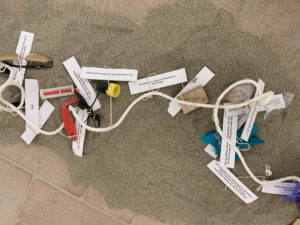 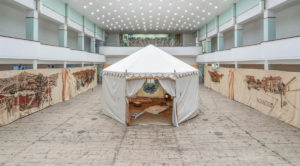 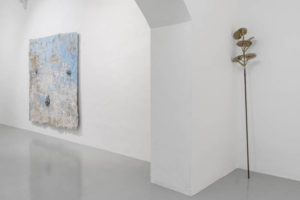