A rethought body, interpreted by memory and shown to the gaze, as vestige of an unknown time. The body proposed by the artist Placido Merino is a formal manifestation of an almost absence, still clearly perceptible but ontologically suspended, presented in his personal “Morgue” which opens in Mexico City at Galerìa Malaga by next 21 February.

The series is the result of a two-step investigation on some of the bodies with no identity preserved in the Instituto Nacional de Ciencas Forenses in the Mexican capital.  Observation and memory, and consequentially, interpretation and reflection filtered by subjectivity, are the main clusters of this accurate creative research. At the initials “Las aproximaciones” follow “Las interpretaciones”, family portraits, personal reminiscences arose from digging into subject to reiterate that beyond the sight there is the vigilant mnemonic path.

A physicality peculiarly expressed by Placido Merino, an artist who masters the technique without codifying it within an idly standardized process. If anything, the technique is the mean that carry over the emotional narration in the space conquered laboriously by each existing body. Quick brushstrokes, decisive, instinctive, or otherwise, slow and silent graphic signs, changing as the subject is changeable, taking possession of the space of the composition.

Everyone is a body.

Therefore, each methodological approach is the product of a specific and unique encounter with the subject. Already in the Sombras series, Merino reminded us that there are many techniques as many as the different subjects. Here, the encounter with the body was an encounter with an emotional DNA often belonging to the subconscious, subjective truth to be acquired through experience and listening to a story of which one is a vehicle. If these bodies were bodies linked to life, in this last series they are confronted with an equally necessary theme.

It certainly belongs to the body but this body – mine – belongs to life as well as to death. Then, we reach the individual understanding of life through the absence of life. Here the body is a lyrical approximation of a passage, it is a faint memory of blood, a trajectory towards the disintegration of the (few) certainties of the biographical history of each one. A body that was (and is) not. A body that is not yet to become different from itself, a stadium of gradual negation of being, an aesthetic idealization of thought.

A body that passes through the pictorial space, lets itself be crossed by the action of time. We hardly ever use to talk on death, and when we do it, we use prudence, even though the concept of the end is innate to the existence. For this reason, beyond silence and beyond sound, art becomes the manifestation of this tacit agreement, with no aesthetic precautions and no narrative redundancies. And it does so through the necessity of memory that gives elegance to these compositions.

The disintegration of physicality in space that once was pure egoic conquest follows the slow disintegration of the archetype. The creative process is a cyclic return of personal history to universal history. The body is landscape drawn by time and given back to him. 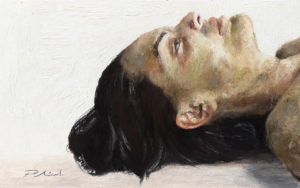 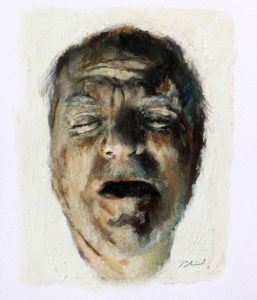 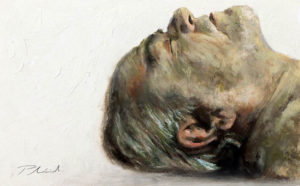