Against wars and injustices: t..

A new reality dedicated to the research and promotion of contemporary visual art practices opens its doors in Padua, with a particular focus on emerging, mid-career and established artists. Based on an idea of the collector Neri Pagnan, NP ArtLab aims to support and enhance the different languages of established and emerging contemporary artists through a rich program located in two private spaces in the city centre.

The exhibition “Unconventional Still Life” is the starting point of the project, an exhibition that also wants to act as a statement, telling a traditional theme such as still life in an unconventional way. From its earliest forms to the most famous ones by masters such as Caravaggio, Van Gogh and Morandi, the “still life” is a pictorial depiction of inanimate objects: in addition to the traditional representation of fruit and flowers, objects of various kinds are also portrayed, such as musical instruments, bottles, vases, game and other utensils. A genre mostly associated with novice academy students, seen as a “minor theme” in a museum and considered less interesting than portraits, landscapes and other depictions, the still life theme should instead be valued as an immutable fragment of time and everyday life: the particular composition of these objects, the study of the shadows and lights that rest on them, the pictorial as well as the compositional choice, make them eternal protagonists of masterpieces by the greatest masters of contemporary art, as well as an important testimony of everyday objects to the reality of their time.

The exhibition opens with the sculpture Bacalhau by Francisco Tropa (Lisbon, 1968), a painted bronze cod that recalls a typical element of Portuguese and Venetian cuisine, a sort of archaeological portrait of the contemporary imagination halfway between fossil and artefact.

The paper artworks by Giorgia Agnese Cereda (Bergamo, 1992), who trained at the Accademia di Belle Arti in Venice, seem to want to take possession of memories, meticulously cataloguing objects from her own past in a sort of personal visual archive.

Aldo Sergio (Salerno, 1982), trained in anthropology at the University of Perugia, with his Unknown prayers series has developed a holistic approach to artistic representation, which has led him to explore the themes of spirituality and symbolism in everyday objects, from food to utensils essential to human life.

Krizia Galfo (1987), who approached painting through a course of studies first in Catania, then in London and Rome, demonstrates her great talent in the technique of oil painting, with three paintings on linen, Alfredo, Herand About Caterina, so faithful to reality that they can be compared to a photographic shot, a citation desired by the artist at a time when photographic representation is overused and accessible to everyone.

Peter Dreher (Mannheim, 1932-2020), an artist of international renown, devoted himself to pictorialresearch into light and transparency in everyday objects. In 1974, he produced the first canvas that marked the beginning of the Tag um Tag guter Tagseries, the long-term project to which he would devote a large part of his life: every day and every night, in a hyperrealistic manner, Dreher painted the same empty glass, on a table in front of a white wall, always trying to finish the work once he had started. Six paintings from the series are on display.

Joining the great master is photographer Marco Maria Zanin (Padova, 1983), an artist and researcher who is already the protagonist of several exhibitions in Italy and abroad, who lives and works between Padua and Lisbon, where he is currently a PhD student in Anthropology. Lacuna ed equilibrio is a tribute to Giorgio Morandi, with bricks, stones, pieces of reinforced concrete, remains of ruins and demolitions collected in Brazil and photographed as ethereal objects in an evanescent atmosphere. Motionless spectators in front of the photography are a group of ceramic sculptures made by the artist, which link up with research into everyday objects used for working the land and their evolution into artefacts.

On show next to a polychrome ceramic (Natura morta, 1957) by the master Lucio Fontana (Rosario, 1899) is the young artist Giulio Polloniato (Bassano del Grappa, 1996), trained at the Accademia di Belle Arti in Venice, where his studio has been located since 2020. With Straccio è a casa and Arena d.p.i., Polloniato masters the medium of ceramics with great skill, playing ironically with the re-appropriation of objects belonging to the everyday sphere to investigate the genre of sculpture with curiosity.

The contradiction between matter, the subconscious and the fragility of an object lies at the basis of the aesthetic research of Guendalina Urbani (1992), who is present with the group of works Aeroplanino, sculptures of varying sizes depicting planes made of folded paper which, however, turn out to be made of lead. A semiotic analysis of the everyday use of an object and the context in which it is presented.

The work Still Life by Jack Pierson(Plymouth, 1960) stands out on the wall of the space, a tribute to the theme of the exhibition and a use of lettering characteristic of the American artist, who has been salvaging shop, cinema and supermarket signs since 1991. A form of reuse of urban furniture that sees letters peeled and rusted by time find a new profile in commonly used phrases. A reflection on the drift of consumerism that affects modern society, with the intention of reusing and restoring what is considered disused and no longer recoverable.

Oggetti smarriti: cuscino nel bosco (Lost objects: a cushion in the woods) by Federico Polloni (1991) closes the exhibition; also trained at the Accademia di Belle Arti in Venice, Polloni is a painter who investigates the oneiric world through personal and original artistic research. Pictorial experimentation and mystical symbolism characterize an artistic practice in continuous evolution.

In this way, NP ArtLab, with its first inaugural exhibition, presenting the work of eleven artists, it pays homage to the traditional genre of “still life”, thus declaring its desire for artistic research and promotion as a bridge between present and past. 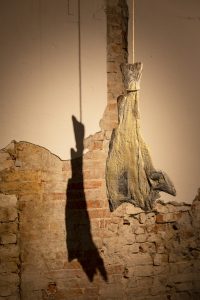 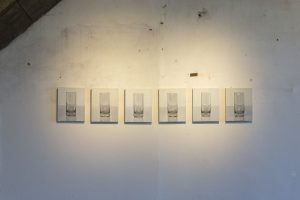 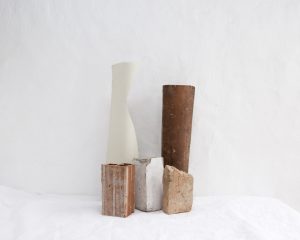 Independent curator specialized in Argentine art, with studies and publications on the subject (“Argentina at the Venice Biennale of Art” in Storie della Biennale di Venezia, Ed. Ca’ Foscari, 2020), founder in 2014 of arteargentina.it, the first Italian platform dedicated to Argentine art in Italy. She currently collaborates in Venice with galleries and artists.