Chronicles: a year of Capital ..

Role play, seduction. The relationship of the artist Ohm Panphiroj with objects, with spaces, is a seamless relationship: the skin becomes a thing and the thing becomes naked flesh, exposed and stripped of taboos and prejudices. You will be there, a project that the Grenze Festival hosted a few years ago, is in Bologna at the Parsec space in via del Porto 48 C / D. The initiative was born as part of the collaboration between the Photography Festival in Verona and PerAspera, a multidisciplinary and eclectic program designed by the foresight of Maria Donnoli and Ennio Ruffolo.

For some years now, PerAspera has hosted a fitting photographic project in its reflection dedicated to identity and the role of gender. The choice of the artistic direction this year fell on an internationally awarded photographer and director. Former editor at Esquire and Qr magazine, Ohm is known as a fashion photographer and director. But the eccentric artist, who has collected over one hundred exhibitions around the world, is also an adjunct professor of photography in Jamaica at the Edna Manley School of Visual and Performing Arts in Kingston. He has six degrees and is currently working on a trilogy of short films: The Space Between Us, The Deaf Boy’s Disease and The Last Summer.

You Will Be There is a project that dates back to ten years ago and is a patrol, an epidermal inspection on the threshold of classicism. Apollonian forms but Dionysian the bubbling of questions that open up under the skin. A seduction of the visible and as such theatrical in the game of vision that is between public and private, intimate and shared.

“By photographing myself and showing myself naked, I try to face my own insecurity and vulnerability, through personal investigations that lead me to accept my body and its power. Each image comes from an idea of ​​myself and of the world”, declares the artist. “Making these portraits is a personal experience, a journey into a complex layer in which identity is seen, judged, but rarely discussed. It reveals my personal desire for openness and research to understand not only who and what I am, but how the world understands me, looks at me and judges me”.

A judgment that filters itself, which is distilled into objects that reify feelings, alterations of the ego, soul vibrations. Here then is a lamp, a piano which, as Surrealism wrote, become windows of critical paranoia, allusions, perhaps metaphors. The image thus becomes a possibility, an “uplifted” peel from the ego crystallized in personal history. These compositions within which time is suspended are frames, aquariums in which a candid soul struggles in the search for “a place of belonging”. 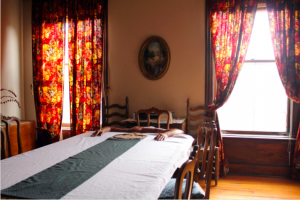 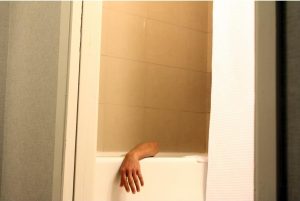