September 2020 – September 2021: the first year of residency of the Capital Project collective, composed by the artists Francesco Di Tillo, Silla Guerrini and Marcello Tedesco, has ended. The experience, born in the context of the ancient village of Colle Ameno in Sasso Marconi (BO), with the exhibition Forme di discontinuità, ends and, at the same time, is renewed, with the collective entitled Cronache.

The place is always the same: the seventeenth-century Villa Davia, renovated in the early eighteenth century by the Marquis Filippo Carlo Ghisilieri. The team of artists, however, expands for the occasion: in addition to the components of Capital Project, there are, in fact, the interventions of Riccardo Bellelli, Marco Bucchieri, Alessia Cincotto – in residence at the organizing collective – of Vincenzo D’Argenio, of the Opificio d’Arte Scenica – a multidisciplinary company founded in 2004 – by Eva Laudace, Manuela Rasori, Vale Palmi, Elisa Prosperi and, finally, Enzo Sbarra. Fragility and resilience, sweetness and tenacity, memory and the will to understand experiences as transformative and generative processes: these are the dominant features of the exhibited works. Different languages ​​are mixed in order “to investigate – as it is explained in the press release – the concept and practice of Public Space”, all without neglecting the dramatic events – often forgotten – that marked the history of the villa during the Second World War.

Nowadays it is particularly urgent to focus one’s efforts on what concerns the expression “Public Space”: the vicissitudes that have marked humanity in the last year and a half should make us reflect in this sense. Zygmunt Bauman, in ‘distant’ 2007, spoke of “overcrowded deserts” in reference to contemporary cities and their inhabitants, who have become insensitive and selfish because they are deeply afraid and insecure. Today, almost two years after the global reflection period fueled by anti-Covid restrictions, how important would it be to make those deserts flourish – and less confusing -? To be able to overcome their fears, everyone must rely on themselves. But, to avoid finding oneself in the condition described by Bauman, one must also learn to relate to the other, rediscover his own abilities in the other. Without comparison, there is no community; without community, there is no public space, no art: the Cronache equation shows itself in its clarity.

On the other hand, as early as 1991 the American writer and artist Suzanne Lacy, in coining the expression New Genre Public Art, comes to argue that public art cannot be considered only the monumental, ‘decorative’ aspect: it is public art also, and above all, the one born outside the institutional contexts, socially and politically engaged in unresolved or underestimated issues, the one created together with the inhabitants of a specific community. The same principles – in agreement with the municipality of Sasso Marconi – were applied by Capital Project in a year of work at the Borgo di Colle Ameno, with the aim of “developing new structures of thought” and trying to recover that “Ability to narrate, tell, transmit [which] seems to have run out”. The repeated efforts have led to the creation of a collective that is also a small festival, enriched not only by installations, photography and sculpture, but also by lectures – that of Eva Laudace – singing performance – the concert of Manuela Rasori and Elisa Prosperi – and theatricals – the return of an extract from The Tempest (1610-11) by William Shakespeare by the Opificio d’Arte Scenica. The same desire to involve artists outside the collective is configured as an attempt (I would say successful) to regain that empathic and collegial dimension which, in addition to artistic processes, should affect the entire creativity of the human soul. We still have time… 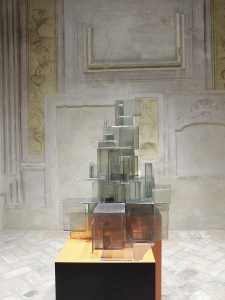 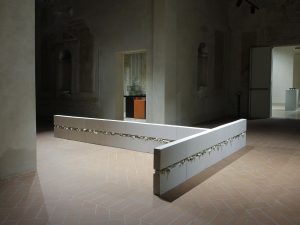