MUSABA, a museum park in the h..

Chronicles: a year of Capital ..

The work of Judith Röder (Vulkaneifel, lives and works in Cologne) emerges from her desire to give shape to a latent image, an image derived from her view of landscapes with particular reference to her native landscape, Vulkaneifel, a region belonging to Rhineland-Palatinate, a former Prussian County where traces of  Roman archaeology are still present. Through her method of an archaeology of the present, as the artist defines it, Röder draws from images and memories of this landscape to shape, in a true sculptural sense, her silent works and the rarefied atmosphere they emanate. This is made explicit by the imaginative landscape suggested by her solo show A Rock Formation, A Stream, A Wood, A Cloud (2021) at the Temporary Gallery in Cologne, a realistic as well as meditative landscape which invites, according to the curator Aneta Rostkowska, to overcome the binary opposition between subject-object to immerse oneself in an affective experience to pursue a symbiosis between nature and culture. In taking the title of the exhibition from fragments of writing from her artist’s book Vulkaneifel (2020) a publication documenting a long meditated project which followed the presentation of a homonymous film-installation as we will discuss later, this solo-show wisely articulates both the material and immaterial values of Röder’s works by addressing in a very subtle and intelligent manner, a new interdisciplinary horizon for artistic research which consists in combining a filmic register with sculpture and installation in a discourse on the relationships between images, writing, and ultimately, voice. This approach explains Röder’s practice in terms of poetics and in the context of the exhibition, this manifests as a plastic and poetic becoming, to begin with a material investigation following the shaping of immaterial images in motion to ultimately become a metaphor.

A series of new installation works introduce the exhibition. Among the first, Lightdots (2021), a series of works on paper in which Röder reflects on visual phenomena as suggested her by the phenomenon of light entering her studio through the support of glass-window surfaces and projecting a series of halos on the wall. In its essence, this series of work reproduces the appearance of nimbus of light in ways that question the limits of ordinary visual perception in order to shape a series of diaphanous images appearing from the background of a number of white surfaces, giving emphasis to the plastic aspect of the images themselves. In citing minimalist strategies, Röder contributes to address affective, material and plastic connotations to sculptural practices through the act of projection by questioning the relationship between humans and nature through the categories of interior-exterior. A similar approach is seen in Projection VII (2021), an installation which employs multiple projection devices applied to the support of different glass surfaces meticulously chosen by the artist, to deal with the dualism between nature and artifice. The installation projects a variation of images freely drawn by the artist from anatomical studies of tree surfaces and further manipulated as if evoking the technique of carving to dwell on repetitions and the surfacing effects of traits, colours, and patterns. Overall, Projection VII (2021) results as the appearance of a series of images to evoke an idea of ​​the sublime that is close to a romantic feeling, but at the same time it rejects any dramatic effect by substituting any subjective point of view with the action derived from the artificial filter of projection and glass surfaces, and this makes her images vibrating with a new energy that is as vitalistic as meditative. Further, with the work Projection VI (2018), Röder makes explicit her reductionist and essentialist view of landscapes through the projection of an image derived from investigations on water surfaces, nature and a phenomenology of light, making the most of her latent images which overall, result as palpable as acute through projection, well responding to the tradition of modernist female poetics and their composition of diaphanous images.

The exhibition environment further opens to two filmic works and is anticipated by a series of photographs that introduces Röder’s vision of landscapes, a vision that is not characterized by a specific cinematic angle, but by a series of long-meditated observations of the environment, climatic factors, and landscapes’ surroundings as recorded and documented by the artist in situ and further translated into a personal form of filmic pictorialism. With the experimental film, Hohes Venn (High Fens), 2021, for the first time in her work, Röder integrates chromatic tones and vocal recordings, and these give emphasis to her interest in recalling a series of visual and narrative tropes such as the metamorphoses inherent in the micro-climates of swamps among others, which give a natural rhythm to her filmic images. Not merely as visual references, these images act as plastic materials, and this is suggested by the artist’s use of blurred and grained effects emerged during the phase of the camera’s exposition which the artist choose during the editing process to add the allure of an impalpable veiling to her film. As the artist likes to say, there is no invention in her practice but overall, her latent images emerge from subtle gazes and perceptual feelings in ways that are amplified in a plastic sense through the filmic medium and this gives thickness and shape to her immaterial images.

The stones are older. They speak. They persist and they survive, the artist suggests in one of her writings and it is precisely with the desire of evoking a latent image that the exhibition ends with the installation complex, Vulkaneifel-Installation (2019-2021). Here, Röder presents one of her first experimental films which was conceived as a historical and a poetic testimony for the landscape of Vulkaneifel, a remote landscape which is still capable of “speaking”, the artist suggests, through the voice of nature, the rustle of trees, light’s phenomena and the passage of clouds over a valley, all captured through analogue mediums and deciphered through the style of black and white. In evoking avant-garde films, the artist translates the traditional plastic aspect of filmic images into a sculptural practice as it is evident in the installation complex consisting of a series of vessels composed of a frosted glass surfaces and harmoniously displayed on the gallery floor. Metaphorically, this can be understood as sculptural gesture which aims to incorporate applied arts into a minimalistic register further revisited in a material manner by connotating glass with new plastic values which shift focus from film to a sculptural field and vice versa. Through this perfect triangulation, Röder’s installation ends with the presentation of the artist’s book, Vulkaneifel, which sounds like an intimate invitation to retrace the landscape’s images captured by the artist not only in a visual sense but above all in an imaginative manner as it is suggested by the artist’s writing. Through the imaginative power of these images, Röder suggests how her latent images are all in all meant to shape an inner landscape. 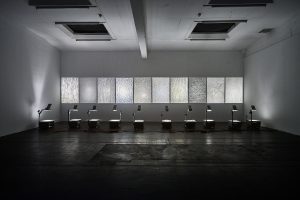 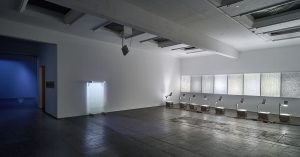 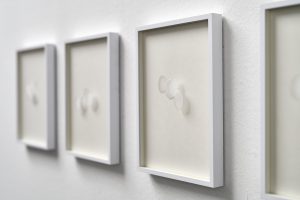 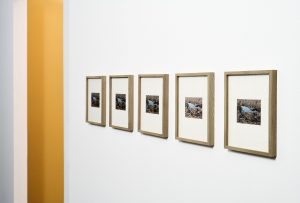 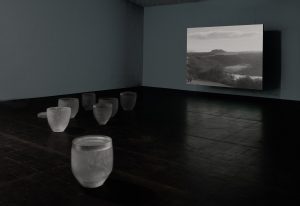