In Italy there are only a few spaces dedicated to contemporary art but surprisingly, in Calabria, in Santa Barbara, located not far from Mammola there is a seven-hectare museum park which stands out as one of the most interesting Italian artistic realities. Founded in the seventies by the artist Nik Spatari and Hiske Maas, it does not aspire to be the classic container of works but it is a place where art is freely expressed and related with the surroundings.  It is a project that has persisted for over fifty years and aims to be an international cultural center, returning to the territorial culture its value and to art its true essence.

But why did the Spatari\Maas association choose this place? Dutch her, Calabrian him. They met in Paris, where the young Spatari had won the attention of critics. In 1966 they moved to Milan: in Via Solferino they opened the Studio Hiske Gallery, a stimulating place accessible not only by artists. In those years Spatari exhibited in several international galleries, continuing to increase his fame. However, soon he felt the need for a new home and, attracted by the call of his land, which had always been in his soul, he decided with Hiske to return to his hometown, in Mammola.

They found in the middle of an amazing landscape, nature was virgin, free from human action. The two boldly decided to embrace that place to create the Santa Barbara Museum: park-museum-school-laboratory. The troubles they encountered were manifold, no one gave credit to Hiske and Nik, only the young locals helped them. Furthermore, Spatari, back from his apprenticeship at Le Corbusier, oversaw the design and restoration of  the spaces himself. Through the reinterpretation of traditional architectural forms and respect for nature, he managed to incorporate the remains of the church of Santa Barbara, a railway exit of the former Calabro-Lucana station with the Foresteria and the Rose of the Wind, the new structures.

The railway exit, which had been abandoned for a decade and reminiscent of the Ronchamp Chapel, was transformed into a cube with small windows and loopholes and was used as a home-studio. In what was the church, the artist after a great restoration action made The Dream of Jacob, a three-dimensional work that extends along fourteen meters long and six wide. The technique used is an invention of Spatari: the figures, or silhouettes, are made by cutting out sheets of light wood, painted and then applied as low reliefs suspended in space. The bodies, which animate the story, possess anatomical precision and plasticity thanks to the purity of the colors. Jacob’s Dream resizes the mental condition of the viewer and immerses him in the artist’s universe.

In the eighties the Spatari\Maas Foundation began to organize events, internships and workshops which allowed international students and artists to work alongside Spatari and create with local materials site-specific works that today dot the park: a school-laboratory inspired by renaissance workshops. Meanwhile, the Foresteria was built, a space suitable for hosting young people. The colorful structure is a large triangle crowned by eleven cells, surmounted in turn by triangular roofs. In the cloister, on the other hand, there is the Monumental Mosaic with a strong polychromy which narrates biblical episodes. The last architectural space created by Spatari performs the function of living space on the first floor and exhibition hall on the ground floor: on the hill stands the Rose of the Winds, whose work began in 2008 and was completed in 2013. The geometric shapes that compose it, triangles and hexagons, exalt the functionality of the structure.

The Musaba which is located within the borders of Aspromonte has imposed its presence in respect of nature and it is a new educational model. Rejecting market dynamics, the institution enables to rediscover the true relationship between man and nature, inviting us to unleash the creative inspiration, free from any constraint. Visiting the park you can not only admire the greatest work of Spatari but you can perceive the absolute dedication of the founders to this project. 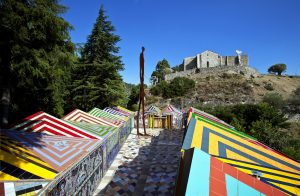 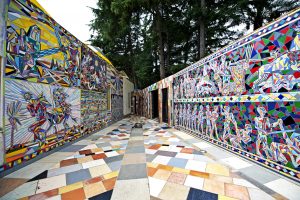 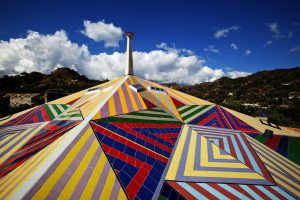 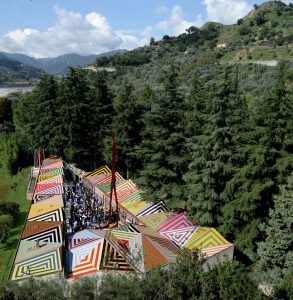