Gianni Lucchesi. Tears in the ..

The first signs of the return to a figurative painting, with an expressionist, monumental slant, capable of delineating the complexity of the world with spontaneity and immediacy, with large canvases, had already occurred from the early seventies. Then the phenomenon spread and merged within the current of the Transavantgarde which had illustrious champions in Enzo Cucchi and Julian Schnabel. Of course, to break up a discourse of linear experimentation and to indicate other (and apparently retroactive) expressive possibilities, we must go back to documenta 5. (1972, “Befragung der Realität – Bildwelten heute”), under the direction of the legendary Harald Szeemann, the first edition not to be under the leadership of the founder Arnold Bode.

It is there that a consistent patrol of painters (Baselitz, Immendorff, Kiefer, Lüpertz, Penck, Polke, Richter), which went against the modern tradition of the neo-avant-garde, had its consecration, with a presence of works that caused a scandal because mixed with a preponderant situation entirely dominated by procedural and conceptual art. Subsequent stages to confirm this unstoppable new way of reading the new times were then three exhibitions that marked an era: “aperto 1980” (Magazzino del Sale, Venice Biennale, 39th edition, signed by Achille Bonito Oliva and Harald Szeemann); “A New Spirit in Painting” (Royal Academy, London, 1981, curated by Christos M. Joachimides) and “Zeitgeist” (Martin-Gropius-Bau, Berlin, 1982, curated by Christos M. Joachimides and Norman Rosenthal).

But a further consideration must also be made: if it had not been for the Michael Werner gallery (at the time with its headquarters first in Berlin and then in Cologne), with all its organizational and promotional efforts and financial support, it is probable that this generation of authors (of which AR Penck was a part) would not have had this unexpected international success and at the market level would not have touched the staggering value that partly make their works, today, unapproachable.

Within this framework and at the end of a long journey and a profitable activity, AR Penck (1939-2017) is one of the most important German artists of the second half of the twentieth century, also because he was able to express the contradictions of post-nazi Germany and the East-West conflict through a very original language even if conceived in traditional expressive forms, such as painting, drawing and sculpture.

Now, a retrospective at the Mendrisio Art Museum (including over 40 large-format paintings, 20 sculptures in bronze, cardboard and felt, over fifty works on paper and artist’s books), gives him credit, with the ‘intent to retrace the main stages of his journey.

Born in Dresden, for decades Penck (pseudonym of Ralf Winkler) worked in East Germany focusing on works of clear socialist inspiration, but managing over time to transform the function of his painting into an element of dialogue with a more enlarged social and political system. Yet, precisely because of the paradox of Germany divided by the Iron Curtain, the fact that his work, so strongly linked to the analysis of the socio-political situation, has been recognized and appreciated only in the West, and never in his homeland. of origin, so much so that on 3 August 1980 he decided to leave the GDR, crossing the border on foot, to settle in Kerpen, just outside Cologne.

The “Standart” figure concentrates the whole figurative universe and the symbolic image of A.R. Penck, and this “icon” is the starting point of the exhibition organized by the Mendrisio Museum of Art. This human figure, with archaic and primordial features, marked by a rough and almost engraved painting, brings to mind the static nature and the synthetic strength of the rock engravings of the Camuni. Thanks to his famous stylized figure (the one that brings him to the apex of international fame, often perceived only as a stylistic code, and not as an element of an elaborate communication system) Penck reveals himself as the artist who, more and better than others, has been able to transform the figurative field into a megaphone through which to spread their theoretical and aesthetic beliefs. His monumental painting is linked both to the historical genre, mirror of contemporary events, and to symbolic painting, to which he gives voice through an entire bestiary of totemic figures or archaic animals.

If we were to ask ourselves the rhetorical question whether art (and style) was born from the Egyptians, the Greeks or the Etruscans, whether it was born from the line or from the color, from the painting or from the bas-relief, from the decorative sign or from the narrative sign, here then that Penck would reply: “Art is born before any classical instance, it is born before any geometric module or rule, it is born with a radical and primitive sign, it is born thanks to a self without sweetness”. It is a sign that excludes air and space, a sign that transports towards a second nature, a nature without atmosphere, facing with force the place usually reserved for the deeds of heroes and which he delivers into the hands of an anonymous figure and absolute: a universal and visionary image capable of representing the chorality of the world in a single perspective.

The retrospectives that have been dedicated to him in the last two decades (Frankfurt, Paris, Dresden, St. Paul-de-Vence, Oxford and The Hague) have provided a broad overview of his most important production, however, in addition, the Mendrisio Art Museum project aims to present the creative path of this giant of contemporary art through its multiform expressions, trying to provide the public with the tools to be able to understand its complex and profound structure. The exhibition, curated by Simone Soldini, Ulf Jensen, Barbara Paltenghi Malacrida, was organized with the support of the Winterhalter Foundation, Mendrisio and of Repubblica and Cantone Ticino, Swisslos Fund. 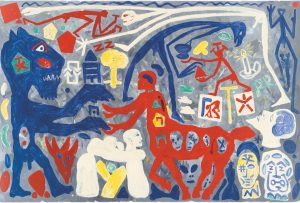 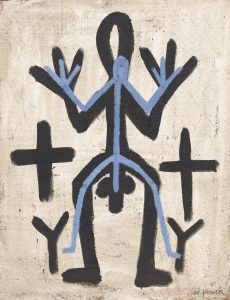 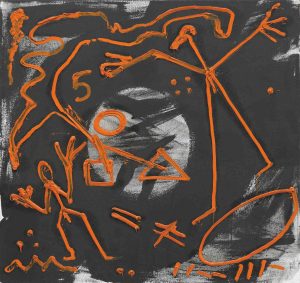