Opulence vs Contemporary. My Baroque by Matteo Mau...

Glitches, an exhibition by Ser..

Ragusa, capital city of the homonymous province, among the richest areas of Sicily, thanks to the numerous baroque testimonies that enrich the historic center with its monuments declared World Heritage by Unesco, extends over the Iblei Mountains, a hilly chain that characterizes the entire territory, and is divided into two parts: the oldest and original part called Ibla or Ragusa inferior and the more recently built Ragusa superior.

The entire area, hit hard by a disastrous earthquake in 1693 that destroyed a large part of the population, saw its subsequent reconstruction increase the conflicts between the old feudal nobility and the new agricultural nobility; the former, in fact, was strongly interested in rebuilding the city on the old medieval layout of Ibla, the latter rebuilt very slowly around Piazza Duomo only after 1730. The continuous contrasts between the two parts led in 1865 to two autonomous and different municipalities, distinguished simply by Superior and Inferior, separation that ended in 1926. In this territory, so rich in history and artistic testimonies, Baroque art takes over, with magnificent buildings, with high-level architectural and artistic results, which rise around the historic center and act as a scenography, making the walks, along the streets of the historic center, a pleasant rediscovery of the past.

In this wonderful setting, the deconsecrated church of San Vincenzo Ferreri hosts Matteo Mauro’s solo show Il mio Barocco, inaugurated as part of the zero edition schedule of the Barocco & Neobarocco Design Festival (24 to 26 September 2021) organized by Roberto Semprini with the support of Valentina Fisichella. The event aims to connect design with business culture, in a magical-baroque context, a symbol of rebirth after the eighteenth-century destruction. The festival highlights how the contemporary interpretation of this generally anti-classicist aesthetic is surprisingly in line with the culture of our time due to the linguistic refinement and the extensive use of metaphor.

The exhibition Il mio Barocco, by Mauro, curated by Chiara Castro and Aurelia Nicolosi, presents sculptures belonging to the series Loves who don’t know how to get by in this world. Passion for architecture, power of nature, experimentation and research of detail characterize Mauro’s work; what emerges in his works is the synthesis between figurative tradition and digital technologies, a perfect combination capable of reworking classical sculptures characterized by mythological figures who, without their original form, leave their mark on bronze and marble geometries: starting from the shape of the perfect parallelepiped Mauro brings out a fluid drapery, capable of softening its shape. In this way the exteriors of the sculptures appear shiny, soft, and seem to hide a mythological fossil inside them, a classic subject that seems to appear and disappear from those external forms: it is Hermes, the messenger, whose story is acclaimed by his hidden absence. with a deep patina: ”when Zeus decided to separate men in two halves, Hermes gave them the word so that they could find unity. Understanding, clarity, harmony between masculine and feminine is a timeless quest”. 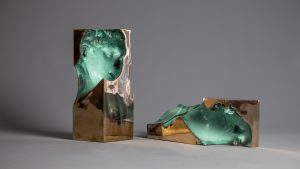 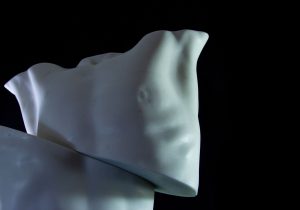 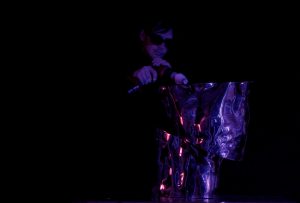