Opulence vs Contemporary. My B..

The “Stedelijk Van Abbe Museum” officially opened its doors on April 18, 1936 with the exhibition “Hedendaagsche Nederlandse Kunst” (Dutch contemporary art). The museum owes its name to the cigar maker (and art collector) Henri Jacob van Abbe (1880 – 1940), who financed the building and made available a sum for the purchase of works of art and for the management of the museum for the first years of activity. All this was obviously preceded by negotiations at a political level, so much so that, in 1933, the city council decided to donate the land on which it was planned to build the museum.

Thus, a small Dutch city, in North Brabant, and which today has just over 200 thousand inhabitants, following an act of strong patronage by one of its illustrious citizens, whose company bought tobacco from the fields of Sumatra and Java, found itself possessing a cultural reality which over the years has exponentially grown. At the moment, the Museum, in addition to deploying a new arrangement of the works in the collection, together with a reflection on the collection by Marcel van den Berg (Alphen aan de Rijn, 1978) and Erwin Thomasse (Eindhoven, 1972), is dedicating a solo show to Victor Sonna, signed by Steven ten Thije and with the collaboration of Hannah Vollam.

Victor Sonna (Yaoundé, Cameroon, 1977, lives in the Netherlands) is a manipulator of waste materials: by recovering objects that are destined for scrapping he destines them to a new life. That of reuse and recycling is not only an expressive modality, whose inspiration perhaps derives from the everyday environment and which we find examples in the most varied corners of the world: from car tires that become flourishing or children’s games to bathtubs that become small miniature gardens, from cut plastic bottles that become small greenhouses for the duplication of flowers and shrubs to the glass shards that crown the surrounding walls of private homes, from cardboard used as “mattresses” to newsprint used as a heat shield.

The “1525” exhibition began with the purchase, in New Orleans, by the artist, of a pair of strains that had been used in the years of the slave trade on the so-called Atlantic route. On one of these leggings the number 152 was engraved, which is why the author, following a path of study and knowledge of these hateful abuses against helpless people, captured and forced to a halved, mutilated and burned life, makes one hundred and fifty-two works of art that reflect on the theme of slavery. The title “1525” is a well-thought-out intuition and a lucky coincidence, because from the branded number, with the addition of a single digit, we arrive at the year in which historians start the first race of slave ships, in that triangulation between Africa and the Americas, which is also called the Guinea trade, and which led to the uprooting and slavery of about twenty million Africans.

Everything is preceded by a journey in which the author, in a completely personal and not predetermined way, with a lot of dignity and pride, turns to the discovery of Ghana and Suriname, in search of historical traces or testimonies relating to this topic in order to develop the exhibition project. In the words of Victor Sonna: “I don’t work on a predetermined level. I hadn’t anticipated that a completely random purchase could lead to this journey. That’s usually how it goes with me; one thing leads to another. I dive in and proceed”. In this regard, I would speak of an exhibition consisting of fragments or pieces of a mosaic, that is, parts that join together, allowing our gaze to see the profile of the final image. And the words of Thomas Bernhard are also useful: “In life we ​​experience the greatest pleasure when life itself appears to us as a fragment, and how the whole thing is gruesome for us, how horrible it is, after all, the perfection of everything which is accomplished “.

But we must also add: it seems obvious to me that on this project the artist’s soul also weighs on his origin as a man transplanted into a very different socio-cultural context, far from his origins, from the attempt to negotiate and mediate between a training and growth in the Western context without having to renounce one’s own cultural roots, that is, without having to be fully assimilated. That of the diaspora, of separation, of detachment, of integration, of insertion, of assimilation, of fusion between different ethnic groups, of the revolution of values ​​and references, are indeed themes of an epochal nature, yet difficult to solve and heated debate. What is certain is that with globalization, with a different idea of ​​borders, with goods and people traveling from the four corners of the earth in the most different directions, the world, peoples, people are in a continuous evolution: a bubbling magma.

This is why Victor Sonna’s personal life experience, always poised between multiple cultures, returns as a fixed presence within his work and reveals to us how deeply his conscience is touched by facts or testimonies that perhaps others would pass over in silence. Much of his work stems from the tensions that arise between worlds, cultures and styles, leading to works of art that de-familiarize and test traditional boundaries and limits. The notions of identity and belonging are questioned through his artistic exploration of the spaces between “being” and “becoming”, past and present, Africa and the West. And I would also add between being or having, between what one is and what one would like to be. And again: between what one would like to be and what one can be.

The exhibition is accompanied by a rich program of public events that invite us to reflect on the role that complex stories (such as the slave trade and colonialism) have weighed on our lives and how they can still upset them today. This exhibition project is part of Musea Bekennen Kleur, a partnership of Dutch museums that explores the issues of inclusion and diversity within the museum sector and was made possible thanks to the generous contribution of Mondriaan Fonds. 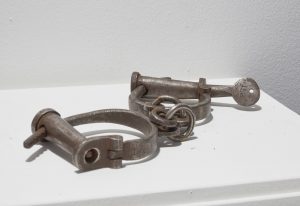 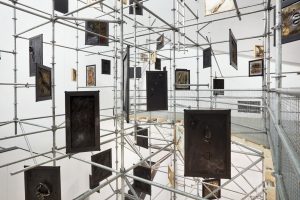 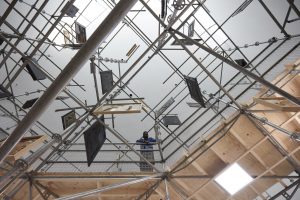 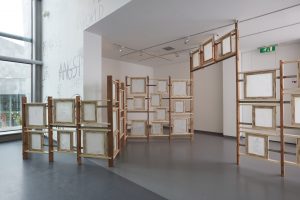 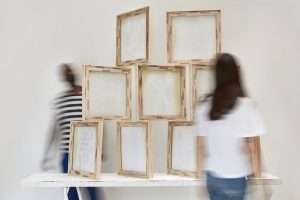