Icons of Light. Bill Viola in ..

In the colors of the day. Matt..

Pier Paolo Calzolari is one of the pioneers of Arte Povera, present since the very first exhibitions signed by Germano Celant (remember, for example, the incredible exhibition at the Arsenals of Amalfi in 1968: ” Arte povera più azioni povere”, strongly supported by Marcello and Lia Rumma) and later included in the black and white book (capital text of those years), published by Mazzotta Editore in 1969, the true ideological statute of those tormented years.

In those years, his works were characterized by the use of unusual or “extra-artistic” materials such as ice, margarine, lead, neon lettering, with a preference for relationships that included the concept of transformation.

Of course, the years go by, Germano Celant has passed away, other authors from that movement have themselves passed away (from Mario Merz to Luciano Fabro to Jannis Kounellis) and that hard and ideological feeling has softened a bit. It must also be said that Calzolari (born in 1943) should be approached to authors such as Gilberto Zorio, since compared to this one he is only one year older, while the age difference, compared to Mario Merz was even eighteen years, given that the latter was born in 1925. This is just to say that Celant had not wanted to create the “photograph” of a generation, but with his intellectual clarity he had drawn up a programmatic manifesto in which he had indicated the key points of a poetic and called to collection of artists from the western world. Now all of this has vanished and this exhibition by Calzolari at Marianne Boesky Gallery is proof of this.

Indeed, I would almost dare to say that the works presented here seem to be linked, on a formal level, even in terms of vision and way of looking at the world, to the pictorial works that Paladino and De Maria presented in the Aperto section of the Venice Biennale in 1980. But the the aspect that in this case allows us to compare is, of course, only epidermal. Actually, the alchemical aspect or the transmutation of materials, a thought always dear to him, is always hidden under the pictorial surface of Calzolari’s works. Transmutation includes not only the aspect of time, the consideration of the contingent, but also a broader view of nature as an environment that affects all aspects of life, that is, any living organism. Ultimately, his poetics become a sort of ante litteram anti-anthropocene proclamation.

From a nature mistreated by man, the artist continues to incorporate elements made of organic matter, such as salt, feathers, petals and leaves and shells, mixing these elements of life with a surprising use of saturated powders and pigments in their bright chromatism. All this leads to transience, to refractions of light, to the effects of chromatic contrasts, so much so that one thinks of an impressionist instance of painting.

The exhibition, entitled “Painting as a Butterfly”, presents more than thirty paintings made in the last four years in his studio in Lisbon, where the author (although born in Bologna) usually resides. The subjects of this new body of works draw inspiration from nature (given that they depict a wolf and flowing rivers and stellar bodies), but also from elegiac annotations, such as slippers suspended in space. It should also be said that this New York event follows that of the great exhibition held at the Madre in Naples, in 2019 (June 8 – September 30, curated by Achille Bonito Oliva and Andrea Villani).

For the most forgetful, we remember that Calzolari, in his long artistic career, exhibited at the Kunsthalle Bern (1969) in the legendary “Live in Your Head: When Attitudes Become Form (Works – Concepts – Processes – Situations – Information)” signed by Harald Szeemann; and then, in the same year, at the Stedelijk Museum in Amsterdam, in “Op Losse Schroeven, sities en cryptostructuren”, a great event curated by Wim Beeren. 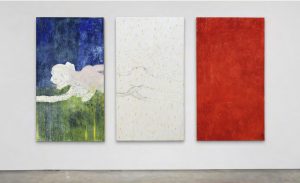 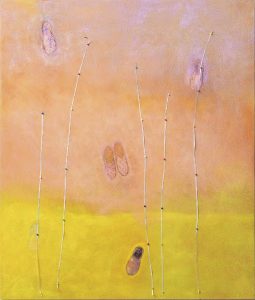 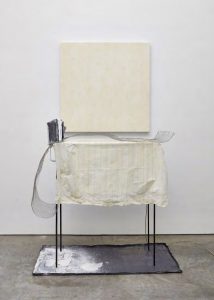