In conversation with Marta Rav..

After four years, the visionary adventure of mtn | museo temporaneo navile, curatorial project by the artists Silla Guerrini and Marcello Tedesco created in collaboration with the Navile district, a work in progress area of the Emilian capital located behind the central station, comes to an end. Precisely to assist the nascent identity of the district still in search of its official form, above all from a cultural and aggregative point of view, the two artistic directors had agreed with the construction company Valdadige Sistemi Urbani (firstly for two years, then renewed) the possibility of using the bright glazed rooms on the ground floor of one of the three buildings that make up the Navile Trilogy, a housing complex designed by Cino Zucchi Architetti, as a non-profit exhibition space. If the spiritual testament of the museum had been ideally entrusted to the Paura della libertà (Fear of Freedom) exhibition, a group show which brought together under the aegis of the homonymous book by Carlo Levi works by the same author, as well as by Marion Baruch, Corrado Levi, Pinuccia Bernardoni, Pietro Coletta, Marco Pellizzola and Mili Romano, its “dissolution” into the immaterial has been given over to the new energy of Giulia Querin and Rachele Tinkham. 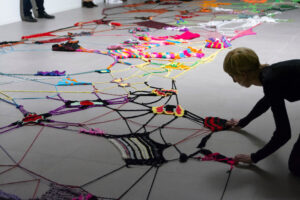 The two young artists, who make up the Plastikhaare duo, have designed for the occasion the site-specific installation Ad una vera pia donna dei simili fili misi e annodai (I put and knotted similar threads to a true pious woman), always visible through the large windows of the museum (whose characteristic has always been the programmatic osmosis with the outside) and physically experienceable during opening hours, which will remain in place until 3 January 2023, the date on which the space will be returned to the construction company. The work, which develops on the floor of the main room, was born as an environmental ceremonial sheet imagined to protect the museum and accompany it in this last transformation, expanding from below like a fog of colored fumes that builds in space (otherwise impersonal like every white cube) tender cells of domestic intimacy. The structure is conceived as a sort of colorful ritual dress and was made with fragments of clothing (more or less related to the shapes and dimensions of the human body) created by the artists using crochet and then connected to each other by further intertwining of threads, as if to suggest the existence of a large expanded, metamorphic and interconnected body despite its apparent dismemberment. 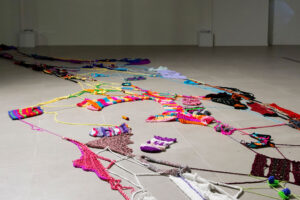 The two artists have been working steadily for a year as a duo, after having cemented their partnership during a six-month Erasmus stay in Germany at the Kunstakademie in Münster, which brought together their different trainings, respectively as painter and sculptor, into a single interdisciplinary poetics and in a common line of thought. Plastikhaare, which in German means “plastic hair”, elaborates the expressive possibilities of an ironic language in which the playful component has the function of naturally bringing to the surface the memory of a hidden world, separated from the official one and refinedly imbued with surrealist moods and of a subtle dissident cruelty. Even the idea of sculpture underlying the work created at mtn | museo temporaneo navile interprets materials and techniques ideally connected to the female sphere, understood in its most traditional sense, as an unsettling meditative practice in which the patient construction of the textile structure finds its ultimate meaning precisely in the opening and final dissolution. The currently visible form of the installation, in fact, is the result of a performative ceremony carried out on the opening day of the exhibition, when the two artists unraveled the sculpture horizontally, starting from a tangled mass in the center of the room, wearing some fragments and tending its lines of force along centrifugal spatial guidelines. 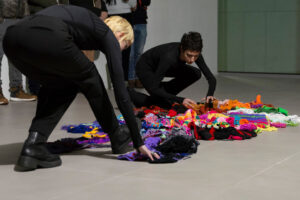 What we now see is therefore a fluid network which, despite its apparent transience, maintains its internal connections even in the distance, configuring itself as a performative display open to the interventions of the public, sensually invited to cross it and modify it by untying and knotting threads or varying the reciprocal position of the various elements to bring out new relationships with each change. The aim of the artists is to reflect on how the dimension of ritual and physical presence is necessary to create a collective space that can truly be experienced and perceived by a community. In contrast to the obsession with recognisability that conditions the formal research of most artists, especially the emerging ones, Plastikhaare expresses her devotion to work in an exercise of freedom that synthesizes the museum’s activity in an idea of authorship which is sensitive and not authoritarian, in a pure gesture of offering aimed at triggering a virtuous circle of care and sharing. In this way, the imaginary body evoked by the individual pieces, made individually in Germany in a period of pandemic restrictions and therefore deeply linked to the emotional biography of the two artists, becomes a plural living organism of which every external solicitation highlights new previously invisible interconnections. 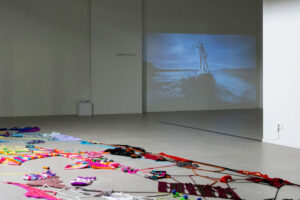 Cooperation also marks the dialogue between the sculptural installation Ad una vera pia donna dei simili fili misi e annodai and the video What you like to see by Fabio Ricciardiello placed in the project room, whose audio loop that borders on the main room constitutes the perfect sound fabric to scan the environment of the ritual and the sacredness of the performance of which the tangible elements we see are testimony. The work, created for the exhibition, is the emanation of a photographic project that the artist has been carrying out for more than ten years and which foresees the formation of a collection of porcelain statuettes from various styles and eras recovered from around the world, each of which is then photographed and visually superimposed on other landscape images taken by the artist during his travels. In the video these dreamlike interpenetrations follow one another which, gradually grafting one into the other, evoke a non-univocal perception of reality that assigns creativity the power to bring to the surface the intraworlds hidden in the interstices of its official appearance. This work also reflects on the dynamics of desire valued as a glue to recompose far and near and to make macro and micro coexist without hierarchical differentiations in an organic, metamorphic unity free from pre-established schemes. And precisely the materialization of what seems impossible, a suggestion that unites the works of Plastikhaare and Fabio Ricciardiello, is the most relevant aspect with the short but intense history of the museum, which we hope to be able to re-materialize again in the city and continue its research.