The exhibition PoliArte (The Art of the Arts) curated by Giacinto Di Pietrantonio at Galleria Enrico Astuni in Bologna presents the works of five great masters united by the fact of having studied Architecture at the Polytechnic of Milan with the intention of devoting only marginally to this profession or to carry it out in an unorthodox manner. The show brings together a group of friends linked by relationships of mutual acquaintance and esteem that for years have investigated the architecture thinking that it was also and above all art and assuming in all their projects a programmatically transversal position towards the various creative disciplines. Gabriele Basilico, Alberto Garutti, Ugo La Pietra, Corrado Levi and Alessandro Mendini are multi-faceted authors suffering from the “Leonardo Syndrome”, a typically Italian specificity that finds its premises in the great tradition of the past, when there was still no specialized subdivision between the arts. The artists in the Renaissance, at the service of popes, princes and lords, developed their planning in the name of the intersection between skills and the configuration of the whole space. The curatorial project of the exhibition rereads the creative story of these five exponents of our national visual culture, preparing a mental space of conversation between their works that, realized in different periods and with different methodologies, witness a strong link with the urban environment understood as a living material to be shaped and not as a condition to be passively subjected to. In line with a large group of artists-architects who have lived in Milan since the first half of the 20th century (among which we mention for example Balla, Sottsass, Alviani and Nivola) their works tell of a continuous implementation of space to explore its plastic, semantic, aesthetic and political values.

Gabriele Basilico (Milan 1944-2013) has devoted himself continually to the documentation of the cities and the transformations of the urban landscape, telling stories through images that he prepared before each trip by looking for thematic itineraries on maps and documenting books. His extensive body of work, ranging from Milan to Rio de Janeiro, Jerusalem, Moscow, Istanbul, New York, Shanghai and San Francisco to get to the moving reportage on Beirut devastated by civil war, testifies to his approach to art (it would be reductive to say documentary photography) understood as an ethical mission. His gaze penetrated every place with passion, capturing atmospheres and measuring spaces, lights, lines and balances to translate his impressions into perfect compositions that only an architect could have designed with such coherence. The strong emotional impact that distinguishes his shots derives from the deep dialogue that he was able to establish with the objects of his vision, the result of a capillary understanding of the urban environment at a structural, epidermal and empathic level.

Ugo La Pietra (Bussi sul Tirino, Pescara, 1938. Lives and works in Milan) has always focused his work on the relationship between architecture and art. Graduating in 1963 with a thesis entitled “Sinestesia between the Arts”, he chooses not to belong to any disciplinary area to freely cross architecture, design and artistic practice. He belongs to the generation that around the ’60s believed that the artist had the intellectual responsibility to contribute to society by developing new tools to understand, decode and broaden public awareness. From university education, a pungent capacity for attention is paid to the reading of the external environment, which results in a systematic production of photomontages that ironically and poetically interpret the incongruities and the aporias of the growing cities at the height of the Italian economic boom. On show we also find a recent series of hand made vase-houses that recall with smiling lightness the visionary suggestions of that period and some paintings from the cycle City without morality in which the drawing scratches the dense background material with a continuous writing on the border between planning and obsession.

Corrado Levi (born in Turin, lives and works in Milan), artist, architect, writer, poet, critic and professor at the Polytechnic (where Basilico was his student) is a transversal and multifaceted figure of Italian culture. His multiform works do not know any restrictions or distinctions between disciplines and are the result of a unique operative methodology rooted in a rhabdominal design that sketches ideas suspended between power and implementation. His instinctive approach, together with the political value of artistic activity, was born as a consequence and development of the intellectual revolution of the 70s, when it was thought that art had the task of changing society. His works start from “himself attentive to others and to the world”, they are authentic, active, usable and vital objects that convey the artist’s happiness in realizing them to the public. In the exhibition we find a series of paintings that testify to his playful reworking of consumerist elements, the pleasure of improvisation, spatial research and physical involvement with the surface of the canvas to be worn, scratched and cast.

Alberto Garutti (Galbiate, Lecco, 1948. Lives and works in Milan) studied architecture because he wanted to be an artist, but the Academy at that time was not able to offer the international scope it needed. His work evolves from an autonomous re-elaboration of the conceptual and figurative matrix of the previous generation (as is evident in the series of modules entitled Horizon) towards the production of objects that relate to social space. The primary objective of his research is adherence to reality, as shown in the project The dog here portrayed belongs to one of the Trivero families, commissioned by the Zegna Foundation. The work consists of a series of benches distributed in various places in the Piedmontese town, home to the clothing factory, on which are placed some sculptures depicting dogs belonging to the families of the country. The artist has accepted the invitation of the client to reason on the territory by choosing as his alter-ego the dog, an interface between man and nature that is able to perceive and spontaneously map the territory with the sense of smell.

Alessandro Mendini (Milan 1931-2019) is a character difficult to frame and classify: among the main designers and critics of the international scene, his activity has ranged from the creation of objects, furniture, environments, paintings, installations and architectures. Born from a family of polytechnics in a real house-museum, where they were, among others, masterpieces by Morandi, Fontana and Savinio that represented an ideal reference point for the artist, considered his work as elaboration of a system of signs that developed ad infinitum on objects, houses, furnishings and surfaces. In the exhibition we find a series of paintings conceived as iconic catalogs of possible visual alphabets and eight ceramic vases painted with the colors used by Le Corbusier in the Unité d’Habitation of Marseilles, in which the material seems to pretend a different nature to stimulate observer a thorough investigation of its surface.

This museum-like exhibition, which gives the future the legacy of five exponents of Italian creative excellence, challenges the interpretative ability of the visitor by suggesting alternative ways of approaching art and reality through the multiple readings suggested by its visual paths. 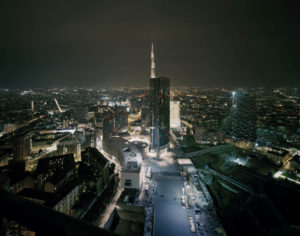