Rirkrit Tiravanija. Tomorrow is the question

Rirkrit Tiravanija. Tomorrow is the question

Just as I am writing this article I am listening to the entire album of the saxophonist, composer and considered as the founding father of free jazz – Ornette Coleman called “Tomorrow is the question” (1959) – title borrowed by the artist Rirkrit Tiravanija for the homonymous exhibition curated by Camilla Mozzato at the Centro Luigi Pecci for contemporary art in Prato.

Rirkrit Tiravanija, born in Buenos Aires in 1961, is one of the most interesting artists on the international art scene, he lives between New York, Berlin and Chiang Mai, trained and exhibited in the most important places in the world and is one of the most significant representatives of what Nicolas Bourriaud called relational aesthetics. Tiravanija in fact as an excellent traveler of places and connoisseur of cultures, in addition to often using the performance, loves to implement processes of social sharing in his work that allow the audience user moments of encounter and interaction that inevitably imply the concrete use of art. It is no coincidence that many of his works have focused on everyday activities such as cooking or eating food together (cooking situation).

The exhibition at Pecci in Prato is the reactivation of the “Ping Pong Society“, a project by the Slovak artist Július Koller (1939-2007) (one of the most interesting figures of Central European art, to be deepened and rediscovered absolutely) who he presented for the first time in Bratislava in 1970 some ping-pong tables in an exhibition space with the aim of involving and stimulating people towards new opportunities for active thought.

We should also mention another work by Koller dated 1978, a photograph depicting a group of people forming a gigantic question mark in Piazza Santa Maria delle Carceri in Prato in 1978 – an action forming part of the concept of U.F.O. (Universal Futurogical Operations) – an acronym with which the artist proposed cultural situations of universal value, oriented towards the future and aimed at creating more conscious living conditions.

Tiravanija had the good fortune to meet Koller when he co-curated “Utopia Station” with Hans Ulrich Obrist and Molly Nesbit at the 2003 Venice Biennale – as told in the interview with Camilla Mozzato – Koller’s work immediately fascinated him for “the sense of social and political play present in his interventions, a sort of dark, playful and self-reflective humor“.

Finally, “Tomorrow is the question” is completed by the big fair flag that waves in front of the museum entrance with the writing in black characters: “Fear Eats the Soul” produced for Creative Time Pledges of Allegiance, the work also recalls the title of a film by Rainer W. Fassbinder from 1973, “Fear eats the soul”, which tells of the troubled and complex love between a German cleaner and a Moroccan mechanic.

Playing ping-pong in the halls of Pecci, an active, present, participated choral performance is realized, a set of clicks and dribbles echo on those written in large letters: “Tomorrow is the question” – a slogan that now devours us a little at a time, every day, among the horrors disseminated by the media – from indifference towards others, to environmental catastrophes – to a growing de-culturalization.

But with how much seriousness and responsibility do we really take care of developing possible hypotheses for this brief terrible assumption? Tomorrow is the question.

We need hypotheses, possibilities, openings and not dogmas or absolute values.

And then between a racket beat and a jazz note, Tiravanija with sublime mastery leads us to play with seriousness – to think about how important differences are, indispensable, about how alterity is slyly exploited by the great powers to instill fear of the other and the stranger, because it is easier to isolate oneself with so many packaged certainties than to stretch a hand towards the unknown and doubt.

The meaning of our actions acquires value only through experience, even better if it is shared, and human thought to return to shine and to be human must no longer be afraid. 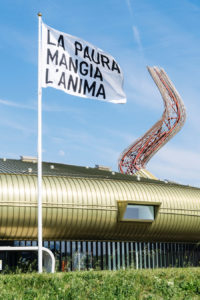 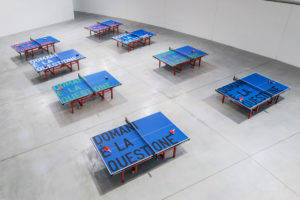 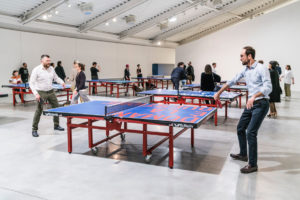