Yuri Pattison (Dublin, 1986) explores the multifaceted and variable connections that exist between distinct visual cultures. In the exhibition Crisis Cast at LABOR Gallery in Mexico City, the Irish artist shows a broad and interesting artistic project focusing on the dynamics of the circulation of information in the contemporary time. By using different mediums, data and metadata, as well as archive fragments that combines to new technologies, the artist establishes a picture of the current contemporary scenario in where the topic of communication meets the one of security in the internet age.

The artist investigates for the first time in Mexico the political and social ramifications connected to the exponential development of technology, using the physical and real environment as a concrete space of investigation. In public solitude (Crisis Cast), complex scenarios are articulated with almost fictitious narrations given by the intermittent presence of new models of communication and transmission – but also manipulation – of information.

This is a broad spectrum of interpretation and reflection that also incorporates the topics of personal and national security in public areas. The increasing presence of safety procedures, as video cameras and other technological systems, has undoubtedly redesigned the physiognomy of public spaces by breaking the previous environmental paradigms.

Thus, it has been created an epidermal space made of different images and elements which draw an illusory climate of security and harmony contaminated by repeated incursions of political or advertising dynamics.

In this recreated environment, in where the messages of communication and the dynamics of their transmission are also redefined, the model of the vision also changes since the perspective is strongly and inevitably conditioned by the absence of an anthropomorphic “point of view” on these scenarios.

Yuri Pattison’s work materializes and activates a risk model and also makes it both a tangible and aesthetic process. The scenarios of modern crises, as airports and places of detention, work as contemporary environmental systems, in where the public solitude is both an aesthetic act and a real space activating and amplifying osmotic reflections.

In this way, it is established a dialogue with the multitude of individuals who are part of this all-contemporary network of relationships and interconnections in where the anthropic presence is accompanied by the fictitious presence of technological elements. The result is a complex socially built space with defined rules and behaviors.

In order to achieve these perceptive and formal results, the artist collaborated with the film production company CrisisCast, setting up a perfectly functional hypothetical space. A sort of system that reflects all those topics in a brilliant and efficacious way.

The exhibition will run until August 20th at the LABOR Gallery in Mexico City. 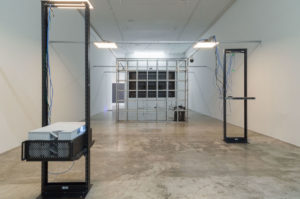 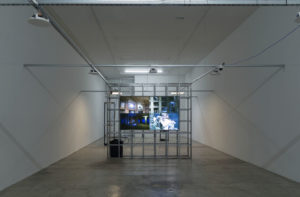 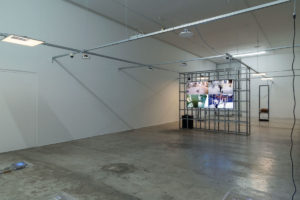