Contemporary painting never ceases to hold surprises. Especially thanks to those who have a wealth of experience among the currents, the research and the discoveries of art of these years. In the age in which there is a lot of consideration of young people who have just left the Academies and are considered professionals even before starting, it worth to give space to those who are building their own path, without pre-established references.

This is the case of Angela Passarello, who recently exhibited at the Mudima Foundation with the solo show Scritto in mare (Written in the sea) curated by Francesca Pasini. She arrives at this exhibition after a non-linear journey, a slalom between poetic experiences and visual artistic techniques. She tells us that since childhood she created her clay games, she used the red of the mulberry tree to paint (when it is ripe it is a deep red and the hands remained red, so I stamped them on sheets for play). And here are her clay animals: Pirò, Terrestrial Amphibian, Blur and Cruro. And in the first three paintings that open the exhibition we find, on the red background, a character suspended from a pole, a tightrope walker. His auction is used to cross a border. It is a figure that comes from nothing but in movement, a symbolic guide, like the announcer of the subsequent paintings.

In large canvases the proportions change but not the characters that are the same, the boat, the animals, the vegetation, the inhabited area. In one of the exposed canvases the demarcation line becomes a bridge. In the triptych exposed at the back of the room two animals float above an island, also suspended, on which a still life dominates. In the first large picture (5 x 1.60 m) a deep darkness dominates the scene, an intense black from which a white boat emerges in the center, on a bank from the rocks stand gray houses, on the other the violet color of a similar ram, goat, or ibex. In the other, still deep darkness. This time on a bank they stand out like whitish trunks and two animals, one red and one brown, witness the arrival of a disturbing flow of boats that take the whole canvas. As for a zoom, in the third all the attention is focused on a crowded barge that is landing on a shore on which there are still two animals waiting.

There is no mention of recent stories here. There is narrative of unconscious expectations, of a sense of strangeness, hunted animals, monstrously others, dispersed in immense spaces. This is why we look at these paintings surprised to feel confused and astonished there too.

The sculptor Nunzio Quarto gives her a piece of clay and Angela starts working again. A hand, a fist, faces, heads, animals and anthropomorphic figures, which already have subsequent developments inside, and she brings them to Curti for cooking. Then the encounter with the feminist artists of the seventies such as Silvia Truppi, Mercedes Cuman, Adriana Monti, Diane Bond, all in the exhibition “The unexpected subject. 1978 Art and Feminism in Italy”at Frigoriferi Milanesi. Silvia Truppi takes slides in the Sempione park to her terracotta heads with a helmet on top.

She also came into contact with the environment of the anthroposophists in via Vasto who combined poetry (Rilke) and color according to Goethe’s theory. She continued her research using pieces of sheet to experiment with watercolors (many of them I gave away, almost all of them) and transferred the color to ceramics (from Giusi Brivio who worked for Domus and who held a ceramic workshop). She creates crushed vases, meaningless iron-shaped teapots and similar things (there are still some with graphic signs inside).

She experiences bronze in an anatomical weave between the human and the animal. She attends seminars with Grotowski and his collaborators; with Ryszard Cieślak she works on the body in its complex expressiveness that brings man closer to the animal. And later with Ludwik Flaszen on the voice. She takes flute lessons with Christina Kubisch who does research music (reference J. Cage). Meanwhile she continues to write.

She writes stories as Asina Pazza and publishes them with a preface by Vivian Lamarque and the illustrations of Coca Frigerio. She publishes the first book of poetry The flesh of the Angel with a preface by Donatella Biasutti. Some texts are published in anthologies, including Poeti per Milano, she reads with Maiorino and Mosca in Milano. She meets Giampiero Neri, who invites her to participate in the “group of friends poets on Friday”. She publish Ananta delle voci bianche with a note by Giampiero Neri. They are poetic prose dedicated to the animals of his childhood. She is co-founder of the magazine “Il Monte Analogo”. She continues to work with clay and ceramics.

At the Maffi foundry in Pioltello she casts in bronze some human subjects and a sculpture dedicated to Boccioni, in which the animal figure also returns. Marina Ferrante records her works in videos and photos. She experiences a work on canvas using only one color for animal figures. She works outdoors in some Milanese courtyards (video taken by Marina Ferrante and never advertised) and takes part in a collective exhibition at the Museum of Murgia (Trieste).

She met Giulia Niccolai, she publishes Piano Argento (Pulcino Elefante editions) and Argento and Pani Scrittu (Verri Piano editions), with a drawing by Giovanni Anceschi. In the last publication, Beasts on the Scene, she collects prose and poems about animals with rhymes in dialect. It is a hybrid language in which the Sicilian dialect assumes the unsettling function that animals, places and colors have in the pictorial works.

In 2018 she painted a large double-sided canvas Rupe Affine for the project “Quarta Vetrina” at the Women’s Bookstore in Milan, which she exhibited at the recent show “Vetrine di Libertà” at Fabbrica del Vapore (April-June 2019), where Francesca Pasini brought together the thirty artists who participated in Quarta Vetrina and some works and graphics, presented by Lea Vergine, by Carla Accardi, Mirella Bentivoglio, Valentina Berardinone, Tomaso Binga, Nilde Carabba, Dadamaino, Amalia Del Ponte, Grazia Varisco, Nanda Vigo, all of whom supported the creation of the Women’s Bookshop in 1975.

As Francesca Pasini writes “Rupe Affine tells her story, the beloved Rupe Atenea, above Agrigento, where she was born. Where she met the complex relationship with domestic animals, with the sea expanding at the center of the picture, connecting the crusted cliff with animals to a strip of distant urban architecture. Her animals are planetary companions that pass through the road, the stable, the air to the mythography, to the fairy tale. His great passion for the earthling unfolds in the open affinity of the living. The intensity of the archaic memory overlaps with the daily intuition, the figures, the colors, the books on display and her poetic writings. A difficult balance, to which, sometimes, a sign or a color is enough”. (Catalog Vetrine di Libertà- Nottetempo edizioni editions). 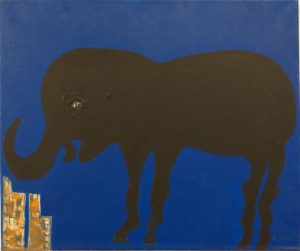