Local relationship. Go beyond the limits. Take risks. Extended vulnerability. Exposure to chance. Primary reactions. These are some of the radical positions that Ruben Montini knows how to take when he performs. Represented by Prometeo Gallery Ida Pisani, the artist born in 1986, since the beginning has dedicated his body to art, tattooing himself on the left leg “FROCIO” to express his inner need to affirm his sexuality. He knows, during his performances, to conduct the action in the narrowest margin, but densely rich in possibilities, which opens up between the preordained, that is, the planning, and the contingent, or the concrete opportunity of execution.

Taking up the teaching of Hans George Gadamer, I say that the meaning is determined in its content by the occasion to which it must serve, so that there is more in this content than it would be independently of that occasion. Montini’s performances are not to be considered a “medium” at all, rather I would define them as presentations-actions that mark identity, control space-time and react to socio-emotional, formal, political, cultural and historical conditions.

In the group show All good things, celebrating 27 years of Interactive Arts BA at Manchester Metropolitan University, the ex-student Ruben Montini, exhibited Portrait of my mother as the most beautiful woman in the world, a 6’43” video, shot in 2019, which documents something that everyone, in a more or less similar way, has done trying to dress their parents’ clothes. A simple, intimate gesture that Montini brings to the eyes of the beholder while a professional make-up artist transforms his face to make it similar to that of his mother in the years in which she brought him into the world.

Taking on the role of his mother, as happens in the performance documented by the series exhibited at Alšova jihočeská Galerie in České Budějovice (CZ), on the occasion of which he tattooed on his lap “I WOULD LOVE YOU FOREVER”, the artist – with a Tribute full of love – questions the idea of ​​parenting with respect to a biological impossibility, as a gay male, and a political impossibility dictated by the restrictions that prevent the adoption of homosexual couples.

If it is true, as Bataille wrote, that human eyes cannot bear the sun, nor coitus, nor the corpse, nor the darkness, but with different reactions, it is equally true that Montini, with the visual language that distinguishes him, it returns that truth that is given in what exceeds the system. He is doingo so in an emotional flow that passes from him to us connecting us in a form of communication so intense that, supposing the negation of existing values ​​that limit the possible, the drives, the needs, autobiographical desires become indistinctly collective.

Parallel to performing, Montini creates Sardinian brocade tapestries that have all the value of real declarations of being in front of which we must not make the mistake of labeling an artist of his caliber simply as nostalgic or romantic (I would have woken up every single day aware of the fact that among all the billion of people living in this world no one would have been you and No also mental ni siquiera del corazón fino de la piel de los hues más aún una cosa de la sangre de los pulmones una cosa de la sangre y de los pulmones cue me have breathe y feel alive are the last two made in chronological order).

With all his actions and all his works he knows, in fact, to contribute decisively to the illumination of society. The Invisibles, in this regard, is an installation work composed of a series of embroidery on photographic prints, mounted on copper, which tells us the tragic chronicle of the journeys of migrants who seek to reach the European coasts in the Mediterranean. The artist, embroidering with the blue tones of the water and consequently covering the images of the people and boats that too often sink right in our waters, makes a sad absence present and gives voice to absolute human values, to universal pietas: a higher value than any legal regulation at any time, in any place.

But an even more coherent contribution to society, and today more than ever relevant in the face of the cautious closure of the borders of each European country, is the itinerant project This Anonymity Is Subversive, which consists of a journey through every single country of the European Union that the artist completes – inviting the public to collaborate in the execution using the medium of hand embroidery – with the aim of creating a colossal piece that can metaphorically express the beauty of a melting pot of different people who share common motifs and similar cultural backgrounds .

When it comes to Ruben Montini, therefore, it is clear how decisive it is that for every action the occasion is contained in the same intention of the work. It is therefore the work itself that, during its execution, happens. Montini gives us back his essence of being occasional so that only the occasion of execution gives voice to the work and highlights what is contained in it. This is why we define his real art, because it is immediate, we see its beautiful side, we trust him. And we don’t ask for anything else.

Ruben Montini, Portrait of my mother as the most beautiful mom in the world, 2019. ph. Ela Bialkowska, OKNOstudio 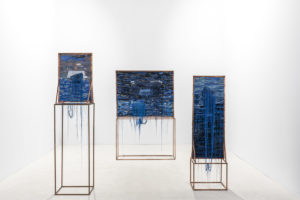 For all the images: courtesy the artist & Prometeo Gallery Ida Pisani Milano/Lucca