Ruben Montini. The radical per..

Piero Gilardi was born in Turin, in 1942. In 1965 he first realized his famous and so called “Nature Carpets” (Tappeti natura) works made of polyurethane that he’s gonna expose at the gallery Sperone (Turin) in 1966, then in 1967 at the gallery Sonnabend (Paris) and at the gallery Fischbach (New York).

From 1968, he stop producing artworks by engaging in the path of art criticism and becoming the correspondent for the magazine Flash Art. Traveling in Europe and the United States, he has introduced in Italy the works of Richard Long, Eva Hesse, Jan Dibbets, Bruce Nauman, and collaborates in the realization of two international exhibitions: When Attitudes Become Form (Kunsthalle Berne, 1969, directed by Harald Szeemann) and Op Losse Schroeven (Stedelijk Museum, Amsterdam, 1969, directed by Wim Beeren) who show the artistic stakes of the moment (Arte Povera, Land Art, Antiform Art).

In 1969, he began to take part in a long activist and transcultural experience which aims at the theoretical analysis and the conjunction «Arte Vita» (Art Life). As a political activist and leader of the young culture, he leads various collective creativity experiences in urban and «global» peripheries, such as in Nicaragua and Indian reserves in the United States, as well as in Africa. He went back to his artistic activity during the 80’s performing interactive installations that talk about our relationship to nature and world, by offering the visitor the opportunity to be part of the work. These proposals seek, among other things, to raise awareness on ecological issues by grasping the contribution of technology and science to the art world; in 1988, he co-founded with Piotr Kowalski and Claude Faure the association Ars Tecnica in Paris.

From 2003, he promotes the project of the Living Art Park of the City of Turin (PAV) where summarize all his experiences related to the dialectic Nature-Culture. In 2012, his works are exhibited in a major traveling exhibition (Castello di Rivoli, Turin; Van Abbe Museum, Eindhoven; Nottingham Contemporary Art, Nottingham). In 2017, the MAXXI in Rome, dedicates him a retrospective «Piero Gilardi. Nature Forever» which shows the different aspects of his work.

Now this great artist, with a strong personality and great moral stature, engaged in a 360-degree social vision of art will get a personal exhibition in Paris in September 2020, curated by Valérie Costa, in Galerie Michel Rein, with an anthological approach, presenting works from the 60’s to the present day. And this will be another step, another version of the contrast between nature as art illusion and the human sensation. As Dan Cameron written on his work: “After all, Gilardi seems to be saying, tending to the world we live in and making ourselves happy as well are just two ways of approaching the very same problem – a point we would never have doubted had we not ourselves been banished from the garden those many millennia ago”. So he rehabilitate nature, the lost garden in fact, for the rehabilitated man, for a better future against a bad past. But he cannot solve our problems for us, he simply show us where some of them are and with finest ironies he strikes where and how the centre of the power build them. 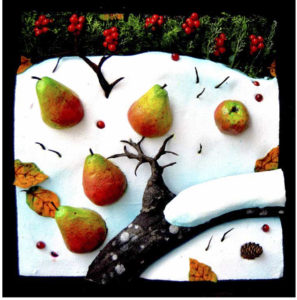 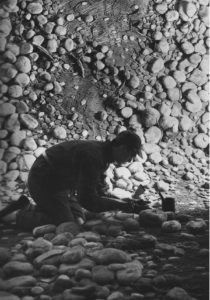 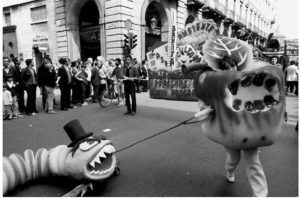 Piero Gilardi, street action, during a demonstration against the use of nuclear energy, Caorso, Italy, 1987 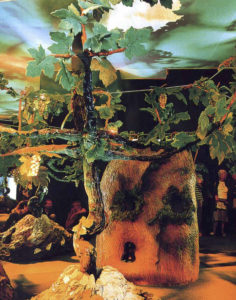