In conversation with Sara Pacu..

Art as an object and the objec..

Military accommodation during the Austrian invasion in 1859, a Red Cross hospital supply warehouse in 1923-25, a gymnasium in 1946 and a telephone pole storage facility in the 1980s. The deconsecrated church of San Carlo and San Donnino in Cremona has, over the years, served its community in a variety of different ways. SAN CARLO, a project realized in collaboration with APALAZZOGALLERY, has finally brought this place back to being a space for contemplation and reflection. Through the involvement of international artists and the creation of site-specific works, SAN CARLO offers the city of Cremona an exhibition series dedicated to contemporary art, whose focus is on experimentation with a great variety of different media, such as sculpture, painting, but also film, sound installations and performances.

The stunning volumes of the church have found a new expression starting on 15 September 2021 with the inauguration of the solo exhibition Glitches, dedicated to the French artist Servane Mary. For the first year (September 2021-September 2022), Servane Mary will invite artist friends to work in these spaces. For her solo exhibition, the painter created three monumental paintings on perforated metal foils. The unique texture of the paintings was perfectly suited to the crumbling and worn walls of the church of San Carlo.

Now, the second chapter of this exhibition is on display, entitled White-Light-Whirlwind, dedicated to the work of Mark Handforth and open until 31 May 2022. Born in Hong Kong and currently based in Miami, Handforth is internationally known for his multifaceted installations that investigate the specificities of American metropolises and their spectacularity. In this direction, the work presented in Cremona re-proposes the use of urban materials and objects relocated and readapted to a sacred context, creating an irreverent and alienating effect, at times pop-like. Among the various works inside the church, the most imposing is a sixteen meters high installation made up of neon lights superimposed on each other to create a vortex that culminates in the centre of the church’s Baroque dome. The alternation of three different shades of white, dirty white and white-violet electric light accompanies the visitor’s gaze as he climbs this discontinuous line and allows him to immerse himself in a true physical manifestation of the meeting of earth and sky.

The natural element is strongly visible in Handforth’s work, which seems to speak of a nature that wants to resume its role as protagonist by breaking into a humanized context, almost bringing to mind the photographs of the French artist Romain Veillon. As already witnessed in the After Nature exhibition held in 2017 at Galleria Franco Noero, the spiral, always present in nature, is an inspirational form and the driving force behind the artist’s creative process. Handforth himself talking about White-Light-Whirlwind speaks of a “metaphysical landscape”.

With its second chapter, SAN CARLO renews its ability to trigger new forms of contemplation of contemporary art, offering the priceless gift of giving real light back to an architecture that seemed to have lost its former value. 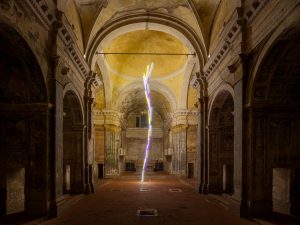 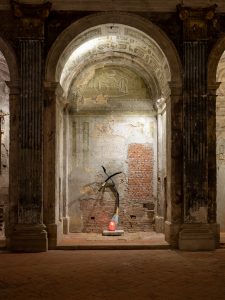