Surrealist practice as a cure:..

Aneta Kajzer: “It Must Be Bunn..

Sara Bonavenura and Elisa Muliere in collaboration with Madelon Vriesendrop, Dutch artist and co-founder of the OMA studio, are the artists of ICONOPLAST, a transdisciplinary project on display at the Caos Museum – Centro Arti Opifici Siri in Terni curated by Adiacenze and Anna Rossellini. The site specific work is only the final result of a residency period at the CAOS Museum, during which the artists were able to collaborate with some companies in the area – Bazzica, Enycs, Faroplast, Lucy Plast, Meraklon – and with the HackLab of the museum for the production of the works and the exhibition project. Another successful test was that of Adiacenze, an established space for experimentation of contemporary arts in Bologna, which in recent years has carried out a project of artist residencies in Emilia Romagna, now in the process of expanding internationally, in which the artists who try their hand at the territory in which they are hosted, unlike the normal artist residences, are accompanied by the curators. The hand that creates and that that coordinates, come together to give light to a true and complete experience, which leaves the host cities a real sign of their presence on the spot.

It is important to know which stories create worlds, which worlds create stories. [1]

Thus opens the thought, studied and lived work that Adiacenze leaves at the Caos Museum in Terni: a project, ICONOPLAST, which is the echo of a paradoxical reality, light years away from ours. In this microcosm, the element that acts as the glue between the two works on display is plastic: this material so demonized today to be – undoubtedly – a cause of global pollution, here becomes synonymous with rebirth and vitality. The plastic material, investigated by the artists during their business trips to the Umbrian territory, has been remodeled by them, subverting the conventional schemes and logics imbued with social denunciation. Here, the plastic in packaging has nothing to do with ecology, processing or consumerism, but is imbued with a brand new meaning and inhabits a “transient” dimension that generates life. In the Sala Ronchini of the Caos Museum video dematerialization, sculptural elements and assemblies made with recycled plastics, domestic or industrial waste make up a post-human environment in which, despite everything, human warmth is there and felt. The colors are sensual and the works are in full vitality.

In the beginning we had God, human beings and nature. Humanists did without God, leaving humans in perpetual conflict with nature. Posthumanists do without humans, leaving only nature. The distinction between God, nature and humanity does not represent any eternal truth about the human condition. It simply reflects the prejudices of the societies that have maintained the distinction[2].

On the one hand Bonaventura creates video installations that oscillate between the sci-fi documentary genre and the mythical tale of the evolution of life on earth, on the other Muliere presses the accelerator and, from the study of the archetype, moves on to the analysis of a new evolutionary stage of matter, imagining the future. Muliere’s sculptures are liquefied, thread-like, they melt just by looking at them and with this refined delineation of the artist’s universe, we see form, warmth and life imprinted in the works. Coexistence between organic and inorganic, between form and substance: living ICONOPLAST means letting oneself be accompanied by the most abstruse and most distant thoughts and having free access to an uncanny dimension made of soft shapes. In this perimeter of the Umbrian museum an immersive experience is designed, an exhibition as if it were a tunnel in which to get lost and be amazed by otherness, by the future, by what we do not know. What will our future be like in twenty years? Two-hundred? Or a thousand? How will our body change? Lost in a thousand questions and unlikely suppositions, until April 24, 2022 it will be possible to visit the hedonistic and playful attempt to propose a distant future made up of dotted lines that we are called to “tear – as Zerocalcare would say – along the edges” . 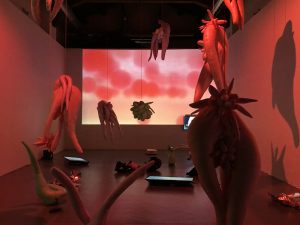 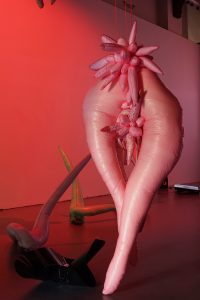