In the colors of the day. Matt..

Surrealist practice as a cure: Gluklya and Kati Ho...

In 1924, André Breton’s first Surrealist Manifesto claimed “pure psychic automatism as a tool for expressing the real functioning of thought in the absence of any control exercised by reason and any aesthetic and moral concern”. When Europe was still traumatized by the massacres of the First World War and already pregnant with the conflicts that would have led in a few years to the horrors of the Second, the exponents of this movement (among the best known we mention Salvador Dalì, Max Ernst, René Magritte, Paul Delvaux and André Masson), fascinated by Freud’s psychoanalytic theories, ventured into the exploration of the unconscious using all that was bizarre, incongruous and irrational as a privileged access key. In order to stimulate the manifestations of the unconscious, the Surrealists had experimented with different techniques based on randomness and on collective not coordinated interventions, whose unpredictability made it possible to detect and emphasize a further dimension with respect to the visible, in the utopian intent of triggering a radical transformation of life able to oppose cultural and social conventions. This rebellion had its origin in the distrust of a system based on reason and rational logic, considered guilty of having generated the political ideologies responsible for the disasters of war. For this reason, their attitude was not that of a mere escape from reality in search of relief from the wounds of the world, but was configured as a precise mode of political expression, whose offshoots reached up to the 1960s.

The surrealist movement spread throughout the world thanks to the diaspora of intellectuals fleeing the regimes of the first half of the 20th century and a particularly significant cell of artists settled in Mexico City, when in 1942 the president Lazaro Cardenas opened the borders of the country to welcome European refugees. Leonora Carrington, Remedios Varo and Kati Horna established a visceral artistic and emotional partnership and Horna’s house became the hub of the Eurpoean immigrant intellectual community, which was quickly integrated into the Mexican literary and artistic avant-garde. The three friends in their works, through “surrealist games, jokes, elaborate costume parties and raucous narrations in the night”, translated the group’s life experiences into the realm of the uncanny, returning their most intimate instances from a privileged angle. Kati Horna (Budapest, 1912 – Mexico City, 2000), already known by the public and professionals for her exciting photographic reports on the Spanish Civil War, but not so famous for her surrealist production, is one of the two protagonists of the Garden of Trust exhibition at GALLLERIAPIÙ, which makes her work dialogue with that of Natalia Pershina-Yakimanskaya aka Gluklya (Leningrad, 1969), a pioneer of performative practice and feminist activism in Russia. The central idea of ​​the project is to reflect on how, in an era that is still pandemic, the theme of the unconscious is very current and on how any hypothesis of treatment originating from this approach, although not decisive, can offer a liberating emergence to the consciousness of phobias and inner tensions, considered here in the specific sense of a female point of view. The two artists, apparently so distant in space-time coordinates, find in the show a surprising elective affinity in the vocation to combine a lucid vision of reality with a method of creative reworking rooted in the auscultation of the drives of the unconscious.

The exhibition opens with the photographic story Oda a la necrofilia by Kati Horna, published in 1962 in the Fetiche column of the Mexican avant-garde magazine S.nob.: the shots, set in an alienating home interior, show the progressive dispossession of a widow in the presence of the death mask of her deceased husband who smiles slyly at her from the unmade bed. The refined sequence of images, made up of original black and white prints in different formats that the gallery has selected from the archive (still to be discovered) of the artist’s heirs, is interpreted by Leonora Carrington, who here plays the photographer friend in a touching aesthetic sharing of her recent mourning. The performance materializes an unspeakable absence by loading habitual domestic objects with emotional and symbolic values ​​which, thus transfigured, ferry the ghosts of the dream sphere into the sensible reality.

Gluklya’s practice is also aimed at making visible the conflict between the individual’s inner world and the political and social system in which he is immersed and is based on an inseparable identity between art and daily life. The works on display are actually the return of a treatment ritual implemented by the artist during a period of residence at the gallery that preceded the inauguration of the exhibition. Inside a real theater built in the second room (which cannot help but recall the scenographic productions of Alejandro Jodorowsky, whose theatrical company Kati Horna was the official portraitist) the artist for days met singles and groups to talk about contemporary treatment and resistance practices in reference to the problems that emerged during the pandemic period. The operation which, if considered superficially, could appear as an unrealistic nourishment by the artist-guru of the stories and emotions of others without then being able to reciprocate the trust of the participants with the suggestion of an effective therapy (which in every case would have been reductive and simplistic), assumes an ethical value as a mapping of the psychic processes and places of the human being in relation to an epochal juncture of generalized difficulty. On a large blackboard that replaces the scenography of the theater Gluklya, during the meetings with the public invited to participate, traced words and images to fix fragments of a shared collective unconscious, noting interconnections and associations which in their stratification invite the visitor to undertake a labyrinthine visual path in the weak and repressed voices of the human psyche.

The solicitations emerged in the “garden of trust”, the definition with which the artist summarizes this performance, were then formalized with more precision in a series of projects for conceptual clothes, each of which reflects one of the interviews that took place, which ideally could become the battle robes of a procession to come, in which the different individualities would mix in the manifestation of a rediscovered sense of community. In the last room the procession becomes real in three monumental black veil sculpture-dresses which, like night visions, barely touch the floor on which they should rest. Free interpretations of the mantilla de luto worn by Leonora Carrington in Oda a la necrofilia, hide within them fragile affective treasures donated by the participants in the performance, dear objects to which the task of representing people is devolved through the embellished materialization of their most private requests. These works find a close-knit visual correspondence in the shot from the Hitlerei series (1937) by Kati Horna with which they are called to dialogue, a satirical series in which the German dictator was represented as a soft-boiled egg unable to escape its foreseeable fate. 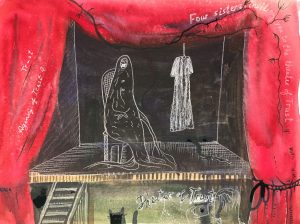 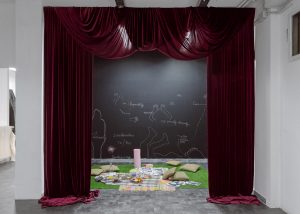 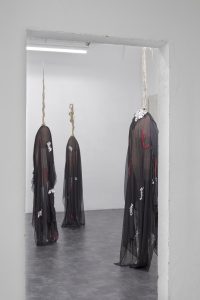