Without Fire/Out of Focus: Isa..

Marcello Maloberti. Story of a..

“Tortured and stuck in the middle of the traffic, in the suburbs of a terribly modern big city, with its hanging bridges, its skyscrapers, its suffocating crowd of passesr-by, they are bumping into the show of the death, without stopping their walk the keep on passing by along, down the street, indifferent, hostile, unconscious. (Pasolini, Pier Paolo, Un Progetto per un film su San Paolo, 1968).

Pasolini describes in this way the figure of the Saint, in his never-realized movie. He wanted to use this character because of his living power, modernity but also because he is torn by conflicts, lacerated with a split soul between sanctity – which is freedom, interiority and joy- and priesthood, which is power, slavery and moralism. A modern Body, but unconsciously deluded because slave to the authority, constantly split cause the natural impulse, and his consideration as object of consumption and power, and the tantrums of the social mind which consider the body as a hedonistic and monolith body and not as a cognitive vehicle.

Pasolini depicts the image of the Saint that destroys “with the simple strength of his religious message, a kind of society based on class violence, imperialism and mostly the slavery (Pier Paolo Pasolini, Un Progetto per un film su San Paolo, 1968). According to Pasolini San Paolo has two faces: the history of two Paolo(s): the Saint and the Priest.

The Body is the veichle-object, symbol of metaphor and the theory conflict itself of the curatorial, aesthetic and informative research of the curators of “Schengen Baroque Pasolini”, Pierre-Alexandre Mateos e Charles Teyssou.

The chaotic and crumbling contrast of the modern age amplifies and leads back to a re-lived vision of a passed epoch full of several and pressing elements.

Since the title the concept of Baroque pervades the entire project because stands as an extension of our living like a real “Horror vacui”, which is multitasking, unstoppable, spectacular, invasive and misleading as was always considered the Church of San Paolo Converso (Mi). The Church was built during the XVI century and used to be a way of sublimation and transcendental conversion of the Apostle thanks and through its baroque and elaborate architecture, while in the meantime the fulcrum of the protestant dissent was giving birth to a reality flowed into in the modern capitalism, reflected also in its own laic neo-liberal architecture.

Is it possible to get involved in the process and the meaning of the project though the social-cultural history which apparently seems to be coded and in need of knowledge of historical element of the past and the contemporary, being strictly alike to the sensory effects of baroque art. The baroque art is full of ornaments and used to dazzle the imaginations with perspective and virtuous effects which are the most opposite Renaissance ideologies of harmony. It is based on the artifice like the enormous and spacious illusions, like the abundance for a fear of the empty.

“The anamorphic Baroque created San Paolo Converso and the reticular Baroque of the ¥€$ regime”, it has been described as a bequest in the press release and exemplifies the fundamental aspect of the concept of power, adulated, desired but transcends money as something different. The power is the divine and actual reflection of the anthropocentric system of the Renaissance, such as the authority put on the methodic and complex mechanism of measurement of data through the invention of the perspective and the world-wide banking system. Is it also clear as unripe elements of capitalism and politics dynamics were already growing up during the Baroque period.

Through a de-codification of the three word-subject of the title is it possible a first but not imminent narrative will of the curators: the name of Pasolini reminds us immediately the memory of his – life of investigation -, the Baroque concept is explored as a current past, then word Schengen concludes with a geo-politic thought: the Schengen agreement signed in 1985 by Belgium, France, Germany, Luxembourg and Netherlands in order to reaching a common vision of Europe.

The stratification of the symbols of the exhibition feeds the hallucination and the uncertainty created by the presence of the conflict and the delusion, but the mediums become aids for the comprehension and metaphors, which don’t allow a first imminent global use-vision but the singolar analysis of each other reveals an impending dimension. This dimension is incomprehensible because unknowable as the strength that control our confuse living due to the Kant’s “Veil of Maya”.

This global system is builded by intrinsic sensory, cognitive and heterogeneous spheres which express the concept self of the exhibition, through the dialogue among different situations and the space, from the virtual and multimedia interactions, to the unpredictable performing act, until an architectural meta-structure created inside the church.

Michel Auder’s “The Course od Empire” (2017) is a digital work in which the displays emit a sequential flow of images thought a syncopated editing transmitting an apparently no-logical and aesthetic narration caused by the variation of imagines of apocalyptic scenery, artworks and colossal texts from author like Rimbaud e Donna J. Haraway.

In the multimedia section we can find the Lili Reynaud-Dewar’s “My epidermic” (a body as public as a book can be) (2015), an art-project with the aim of protest focused on the reflexion of the proportional implication of the AIDS virus on the individual body and on the “social” body.

The architectural elements of the exhibitions are fundamental and crucial because they generate an idea of duress and disorientation: for example the metallic structure “STR O1/STR O2/Reinforced Glass STR” (2018) by Armature Globale refers to an industrial, naked, grey scenery. While the exoskeleton of the structure created by Gianni Pettena is focused on the concept self of Baroque leading with the concept of conversion/transformation of the shape, ideologies and the behaviors of the society and the body. He elaborates an anti-concept project against Baroque of the church with the application of the maximum system of measurement which is the golden section. 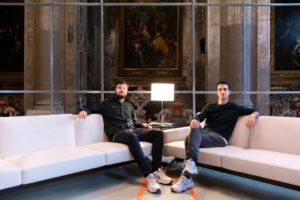 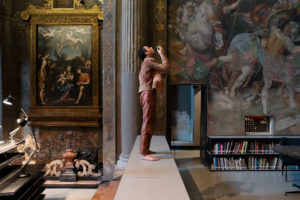 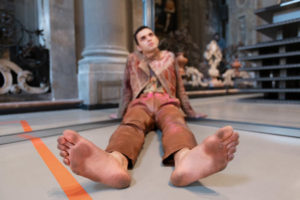 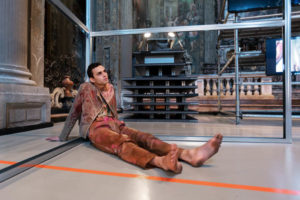 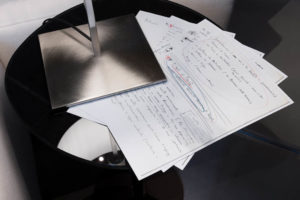 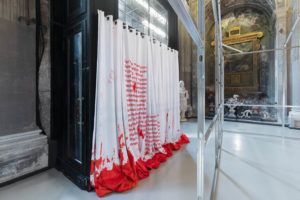 For all images: Schengen Baroque Pasolini. Installation view and performance at spazio Converso