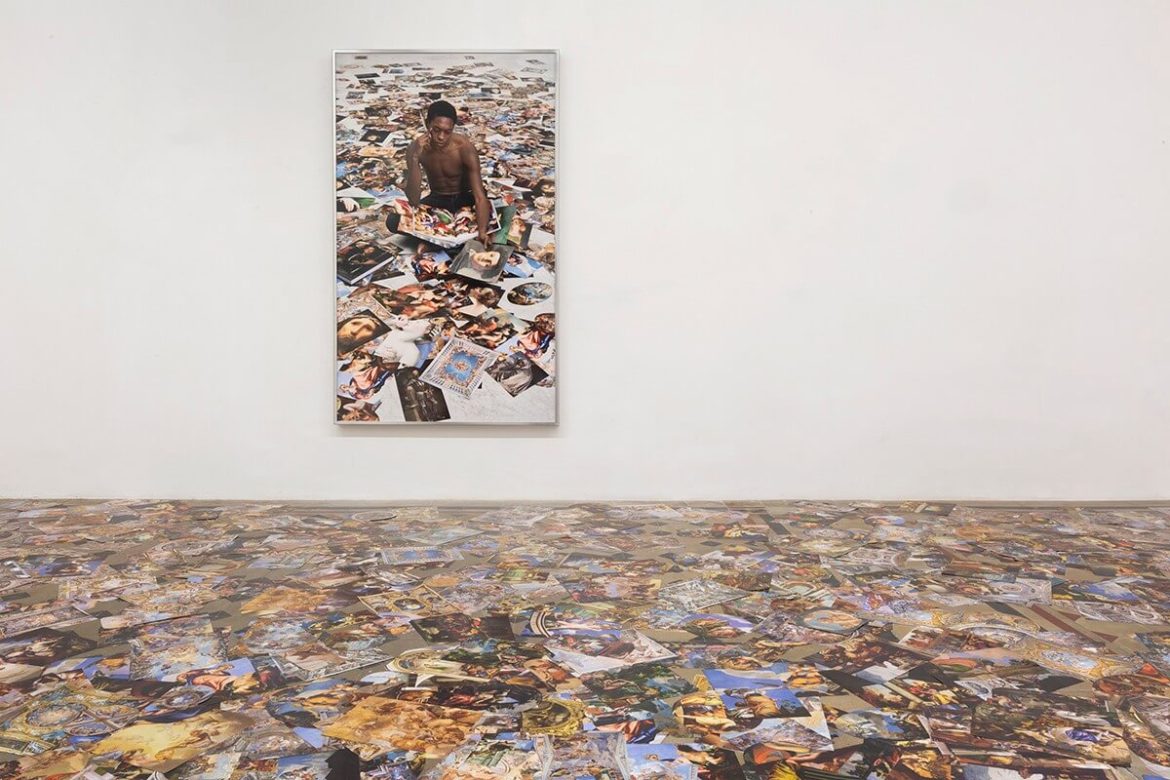 The Galleria Raffaella Cortese hosts until March 2nd the fourth solo exhibition dedicated to Marcello Maloberti, curated by Pierre Bal-Blanc. The exhibition itinerary is developed among three separate spaces in Via Stradella in Milan, three branches of the same body.

At the number 7, visitors are welcomed, according to the artist’s words, by the “hugs” of the notebooks that hang from the wall and form a line, a visible archive that penetrates into the warehouse, by breaking the scenic fiction of the gallery space.

The wooden boxes of the works of other artists interact directly with the Maloberti’s Marmellate (2018), made of collage, forms of “falling in love” between images, visual notes mixed up with words quickly written by hand that recall the everyday life of the artist who publishes his Martellate on Instagram. The lost Benjaminian aura becomes clear through the writing of the word “auroral”, as a re-enactment of a past time that returns. These early works are the key for reading the whole exhibition, as premonitory symptoms of an artistic expression strongly linked to “the other” and to the ancient.

The anachronisms between the works and the images of the same composition are part of a dialogue that takes place through the audio recording of a Cicero (2018), a guide of the Suardi oratory that tells the story of the fresco painted by Lorenzo Lotto. It evokes its presence, the absence of images and the clash between the present and the ancient beauty.

The poor and serial outfit forces the gaze of the observer to concentrate on the images, from which everything has sprung, and not on intellectual thoughts. The centrality of the visual perception floods the perception of the visitor even more, at number 4, when he is forced to walk on precious cutouts of domes and seventeenth-century skies that invade the floor. A similar invasion is daily perceived worldwide through the images of the digital culture, but here it leaves those who enter astonished in front of the abundance of paper magnificence.

The mobility of the forms is real in the Trionfo dell’alba (2018) where, hanged alone on the wall, the photograph of a “foreigner”, with a dark and diaphanous skin and a marble body, is portrayed in the act of cutting out the same images exhibited on the floor. He welcomes the spectator in an intimate and suspended space where the ceilings of the frescoes become precious floors, walkable with the delicacy of an intruder in a sacred space. The works shown in the exhibition are linked to previous performances and make the dream of the Wagnerian total work of art more real.

Following the footsteps of his master Fabro, Maloberti accesses today through the ancient, its knowledge and the relationship that it establishes with the architectural and personal space. These constellations are born when their shape is fragmented, by leaving the place to another form that takes on new life. As the artist remembers, using the ancient is touching something that is still alive. The search for vitality is what has always characterized the return to classicism, from the tables of the warburghian Atlas that is inevitably present in the collages as in the performances of Maloberti.

The anachronisms of the techniques, mediums, styles, architectures, spaces end at number 1 of Via Stradella where the artist’s first oil painting, on a wooden panel, painted with Renaissance technique, closes the exhibition. The horizon here is made of voids that intensify the sense of suspension of space and time in which the sacredness of the frescoes, the daily gestures and the simplicity of the words evoked and written with the marker are dispersed in the light and memory of the previous spaces.

The artist reminds us once again that it is poetry that saves us, even when contemporary art seems to be tame. Through an intimate atmosphere the visitor abandons the Gallery, without disturbing the gestures of love of the “foreigners”. “Making love with oneself”, with this words Maloberti describes his artistic practice, a way of “falling in love with forms” and their multiple temporalities. This taste of precious pleasure is left by the Sbandata in your mouth. 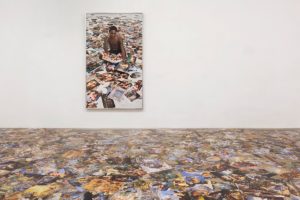 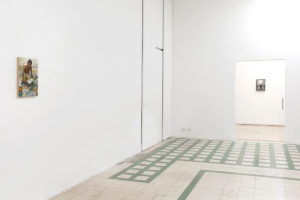 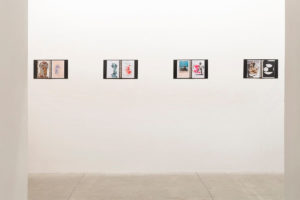 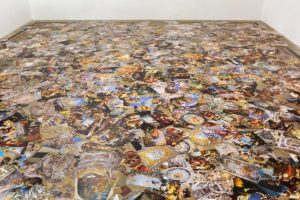