Sediments’ architectures: a conversation with Fede...

On the occasion of the exhibition Cosa sono le pietre, curated by L’ARIETE Gallery and on view from 29th October to 30th November, I had the opportunity to speak with artist Federica Zanlucchi to deepen her artistic practice. 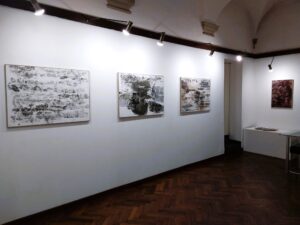 Ylenia Modolo: I want to tell you my thoughts: while I was visiting the exhibit, I noticed that sedimentation is the cornerstone of all your artworks. You show deposits that aren’t unmovable, but seem always moving, like they have been just transported by weather factors, by air, water or even expelled by a volcanic eruption. It is like if in some way you created a land crack to show us the story, the movements and how this material rests on the ground…
Federica Zanlucchi: It is true, sedimentation is present in my work in various forms: natural, pictorial and memory sedimentation. Often in my paintings I like to match near and far, darkness and brightness, thickness and rarefied, and all those different directions and consistencies create an oscillation. In many artworks there are masses of material that seem like they are aggregating or disintegrating, that evocates an embryonic atmosphere in which indiscernible forms appear. There is sedimentation also in some pictorial intervention I use: I move the color on a fluid material, and I let the pigment lay down. The calcareous sediments thus become rocks full of memories, like a remote and unfinished diary. In the end, we have memory sedimentation: the landscape is broken down in scraps, tracks of my memories that, by coming across the times and places in which I lived, get pulled together in a panorama that becomes memory of lots of places and none of them. 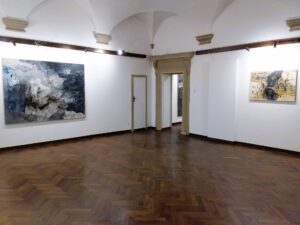 These swarms depicted by you become real constructions, it is almost as if you descended the outline of the world, the existence, the structure of everything that surrounds us in a micro/macroscopic way. The shapes acquire not only an organic nature, but also become real architectures of a landscape which is not only external but clearly mirrors your sensitivity too.
Thank you for this description! Perhaps, as you were saying, what I paint becomes an architecture, a space that can host plant animals or minerals. Maybe there is a subjective distortion, not being connected with the scientific representation of nature. Everyone finds a personal relationship with the landscape, the way of seeing and living it derives from ancient collective memories and from personal sensitivities, that is an outcome of inclinations and past. In painting, the subjects’ choices and the way they are depicted create a personal grammar and aesthetic that, as you said, puts together the represented external world with the internal world that filters it. Gilles Clément, in his poetic argues that landscape is what we cherish in our memory after we stopped looking, what we preserve in our memory after we ceased exercising our senses in a place assaulted by the body. 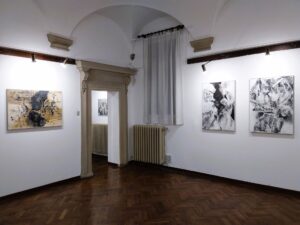 In your paintings you manage to connect opposed things: all acquire form and in the next instant become something else. At the same time, you don’t let the observer defeat, there’s an invitation to move close and to follow the colors’ movements, to follow an outline which invites us to imagine how the form will become the next time.
In my oeuvre the color’s movements inspire an evolution in the image reading and maybe not every natural elements’ details, which are often hidden, will be seen, but what I truly want is the viewer to direct his glance in the artworks and see what his sensibility suggests. The observer is asked to interpret and to collaborate together with the artist in order to fill the space of the not-seen or the not-said. 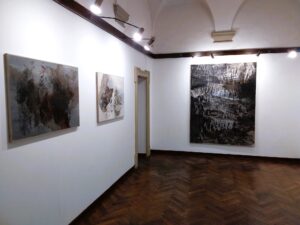 When one realizes a piece, it is necessary to confront with the fact that it will immediately become something other than us. The time and the viewer’s gaze will confer it new meanings. The observer has been and will always be the one who completes the artist’s action.
This is true, an image is never ended in itself, but through the other’s gaze it changes and transforms. Mentioning Umberto Eco, the artwork is like a “lazy machine” towards the observer, who is called to understand it.