Sergio Padovani. The sense of the sacred as an int...

Sergio Padovani. The sense of the sacred as an intrinsic condition of the human being

Thomas Aquinas said that images of sacred art are “figures of bodily things” and that “the ray of Divine Revelation is not destroyed by the sensitive figures with which it is veiled”. Nowadays many artists try to deal with sacred art without keeping in mind the main elements that give it life, producing works that do not have the spiritual theological element, but only an ephemeral if not irreverent and unconscious representation of the sacred.

Sergio Padovani is certainly not one of them; he was born in Modena and for several years has been an experimental musician. Self-taught, in 2011 he was selected for the 54th Venice Biennale, Italy Pavilion, Turin regional section and in 2016 for the Rimini Design Biennial. During his artistic career he won the Arte Prize, the Arte Laguna Prize, the Wannabee Prize and the Yicca Prize. His works are present in important collections in Italy and Europe and permanently at the Diocesan Museum of Sacred Art of Imola, at the MACS of Catania, at the Estense Gallery of Modena, at the Ruggi d’Aragona Museum.

Looking at Padovani’s works, one has the feeling of being in front of the frames of Faust, a film by Sokurov awarded at the Venice Film Festival in 2011 that reflects on human wandering. In fact, Padovani represents the author of the Polyptych of the vulnerablemiserables, cumbersome and exhibitionist presences that make room for success even in the art market. They move with difficulty in a macabre dance (which perhaps has the Ballad of the hanged by De André as background) which resembles a picaresque journey in which we are dragged, involved in a perpetuum mobile, in a visionary synthesis of great impact, as one can see in the work The house that burns alive, to be considered a sort of manifesto of our era where the exaltation of empty formulas such as “Times change” reigns supreme, in fact we do not know what is burning, what is precious in that house, which is our world, our society, but everyone smells of burning.

Padovani’s humanity is often surreal and bizarre, a set of ruins to visit, delving into the symbols, in the fullness of the colors. Padovani blends tradition and innovation, late medieval iconographic themes and contemporary reality, explaining transcendence as a human feeling, using materials such as resin and bitumen to show how distant times can touch each other.

Your works mostly recall medieval art in its darkest and most macabre aspect. What fascinates you most about medieval art?
The contemporary spirit and its functionality. Medieval art was a real mirror of important events both in religiously and politically-socially field, not to mention historical events, especially the Plague of 1346. The medieval artist had the almost “artisan” function of creating functional works not simply to admire: they had to be communications and descriptions of the present, imbued with the general feeling, useful to understand the moment from every type of social class. What I love most is when this type of art takes possession of the historical fact and almost peremptorily drags it on a path full of visionary, superstition, beliefs, commonplaces and it leads us to the fierce, fickle, imaginative and merciless language of the people. It seems to me a creative and modern “trigger”, more relevant than ever even in 2020.

What’s your relationship with death?
A very good relationship. I am not saying this jokingly. I undergo a sincere dichotomy: on the one hand the thousand questions that we fear morbidly typical of the unknown matter (when it will be, why, how, what will happen next, etc.), on the other the thousand illuminating questions that stimulate our life, typical of the same matter unknown (which could obviously be the same questions above) and which, in my case, are a source of incessant creation. We are mortal beings and the only way to find a trait d’union with our pilgrimage is to take possession of the concept of one’s own mortality. It makes sense to live with death precisely because, calling De André into question “death never dies”.

Which artists do you think best represented death?
I could name many, especially among those easily found in my painting. But I would like to mention a few, at the turn of the times and styles, among those less visible in my work, but whose influence is equally fundamental: Jacopo Ligozzi, Hans Baldung Grien, Alfred Kubin, Herbert Boeckl, Paul Delvaux.

The characters of your works represent real stories in which divine intervention is perceived. What is transcendence for you?
Very prosaically I could answer that it is the decisive and necessary perception for which an event or, in fact, a represented story, finds its real explanation. Basically we all think, even unconsciously, that something in our life always happens beyond our will, whether it is immanent or transcendent, it does not matter: it is a human feeling. Here, I believe that transcendence for me is a powerful human feeling.

How do you see sacred art today?
I see it more aesthetic than functional. And certainly much less logical than the meaning of Beato Angelico or Duccio di Buoninsegna, just to give an example. I myself, every time I approach the sacred I do it in a condition inevitably subjugated by the illustrious pictorial theme. I firmly believe that it is the task of the contemporary artist to deal with previous schools of thought and the resulting themes. In my case, the sense of the sacred in paintings is essential to pass it on as an intrinsic condition of man within his path. Even as a character within a painting. In many, enormous paintings I find the sacredness not manifest, even where it shouldn’t be: just think of works like Goya’s May 3, 1808.

Who are the vulnerablemiserables in the world of contemporary art?
They are cumbersome presences that drag themselves into worlds that make their own, devouring them from within. From de André I go to Gaber and say that “making one’s way by floating” becomes an essential condition for them. Thousands of photos posing with the work, of so-called “work in progress”, of works reproduced in series not for stylistic but for economic necessity, of white canvases waiting to be painted but which, in some way, they must still be “interesting” in the eyes of social communities only because they are placed in a studio. It seems to be the first way to spread art now everywhere; but I find it the result of a concept of artistic disclosure extremely vulnerable to that of those who preceded us, and, often, vulnerability leads to finding the worst of us, translating into a miserable and useless display. It’s one thing to divulge your work, another is to divulge yourself

Given your past as a musician, do you think you are translating notes into colors and figures? Can you express yourself better in the artistic sphere?
No, I don’t think I do. Although the relationship between my music and my paintings is absolutely stable, the only real connection is the approach to matter. As in music experimentation was the corpus of the whole, experimenting without predictions or preparatory drawings on canvas also becomes the definitive meaning. So, in a way, being a musician helped to better understand my pictorial direction.

Your works are elusive, full-bodied, deformed, deadly. Is it the western allegory of our way of seeing Christianity as a religion that is given less and less importance and that basically does not bother?
Maybe, somewhere, there is also that inside. Not only that. I see my paintings as large funnels where everything that infects me finds fluidity and amalgam. Preconizing my painting is almost more important than painting it, in this sense my contemporary testimony clings to the surrounding (of all types and shapes) to drag it into these funnels and to be able to stitch it up once it is released.

Which exhibition excited you most and made you aware of your talent?
More than my talent, I am aware of doing what I like and how I like doing it the most. I am only interested in understanding where all this will lead me, for better or for worse. The exhibition that has involved me most, to date, was my latest personal “Invasion” by Camillo Langone, in the incredible spaces of The Bank Contemporary Art Collection in Bassano del Grappa. Exciting not only for the happy conclusion of a very intense pictorial period that led to the works on display, but also and above all for being the artist who inaugurated a large and precious space that, in a very short time, has become of vital importance for the art in Italy.

Future commitments?
Many and very demanding. Hoping, taking into account the times, to realize them as soon as possible. 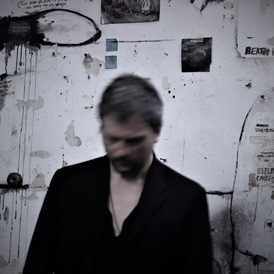 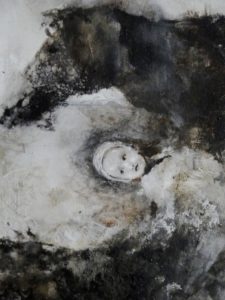 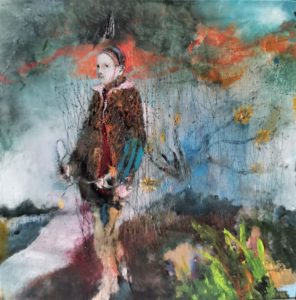 Sergio Padovani, L’usurpatore. Oil, bitumen and resin on board, 2019 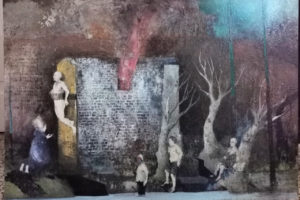 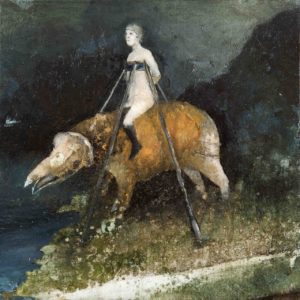