A surreal and timeless dimension embraces the viewer of «Set to Default», the first solo exhibition in Italy by Nour El Saleh (1997, Beirut). Set up at the Castello di San Basilio, in the heart of Basilicata region, the exhibition is the result of a two-month residency period, where El Saleh worked alongside a group of international artists made up by Sheida Soleimani, Nicolás Said and Rade Petrasevic.

The works of El Saleh are populated by bizarre characters with sinuous and deformed bodies, whose faces are distinguished by pronounced aquiline noses and livid full lips. Their half-naked and sagging bodies are marked by deep wrinkles that prevent the public from guessing their ages and placing them in a specific historical era. These ungainly figures look like puppets belonging to some ancient travelling theatre, ready to play a different role at each staging. Like a play in three acts, each of the canvases represents a specific time of the day: Set to Default in the morning, 1, 2, 3 SOLEIL? in the afternoon, and 33 Repetitive Strain in the evening.

The aesthetic quality of El Saleh’s works is emphasised by the richness of the details that lead the viewer into a complex visual labyrinth built from iconographic references that reveal the artist’s profound knowledge of the great masters of the history of art. In 33 Repetitive Strain, a half-naked female figure is seated in an enclosed space, behind her a window overlooks an old disused furnace. The woman’s forehead is marked by an oval-shaped protrusion that can be traced back to the popular Renaissance myth of the ‘Stone of madness’.

Specifically, the artist was inspired by the Flemish painting of Quentin Massys, Allegory of Folly (ca. 1510 – 1515). The latter depicts a clumsy character with a protruding nodule in the centre of the forehead containing, according to tradition, the stone of madness or foolishness. Based on the belief, people affected by this protuberance carried madness within them that could be removed with an incision. Compared to Massys’ painting, the stone of madness in 33 Repetitive Strain is alive, complete with a face and long arms. This one, whose face is altered into a smiling grimace, plugs her host’s ears, a gesture that seems to accentuate how madness makes us deaf. The woman, with a vacant gaze, points with one hand to a model of an uncovered house. This last detail, reminiscent of the architectural models used in the study of theatre sets, had already been used by the artist, although in a different form, in a previous work, The Actor’s Dollhouse (2020).

The same model returns to a larger scale in Set to Default, creating a visual link between the two works that are placed opposite each other. The characters are trapped in a building without doors in this second canvas. The theatrical nature of the scene is accentuated by the presence of a female figure on the outside, overlooking the dwelling. This one, partially facing the viewer, looks like a puppeteer with her arm stretched forward ready to move the rows of her puppets. Like an omniscient narrator, the woman controls the unfolding of events. In a way, the condition of unconsciousness in which the inhabitants of Set to Default live, who naively go on with their lives, recalls the Platonic myth of the cave, where prisoners are locked up in the dark, away from the world. Their only realities are shadows cast on the wall. The architectural model reappears a third time in one of the two sculptural miniatures, 1 4 Quentin, where the artist, using a paste to model, breaks the two-dimensional surface of the canvas bringing the subject to lean towards the viewer. The disarticulated figure is portrayed with her mouth open and a small smiling face protruding from her forehead.

The enclosed environments in 33 Repetitive Strain and Set to Default are completely abandoned in 1, 2, 3 SOLEIL? where the bright yellows and greens contrast with the darker colours of the other two canvases. In the latter work, the figures, who move freely in a landscape inspired by the Basilicata countryside, are connected to each other by a thin red thread. This appears to originate from the rhombus-shaped headdress of the figure in the foreground. The image of the lozenge, also present on the collar of the dress, is a recurring detail in the artist’s works, appearing on the stage garments of her characters, on floors and draperies.

El Saleh, through the combination of singular characters and bold colours, succeeds in creating a suggestive, seductive and at the same time disturbing atmosphere capable of trapping the viewer’s attention. This effect is amplified by the choice of dedicating one wall to each work, avoiding distracting elements and allowing total immersion in the single painting. What the artist proposes is an aesthetic experience aimed not so much at a mere visual reading of the subject, as at a philosophical reflection. With her paintings, El Saleh tries to trigger in the viewer’s mind a self-reflective action on the conditions of control of society. While individuals control each other, they are supervised. 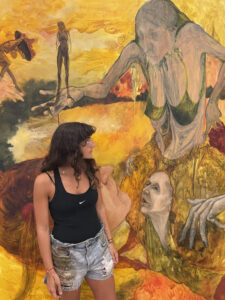 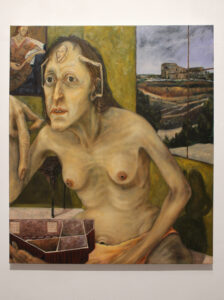 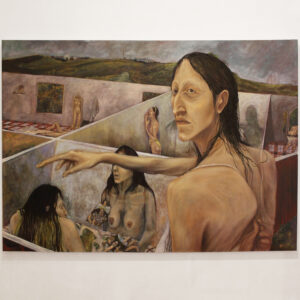