Shirin Moayya. The restless forms of the human sou...

Shirin Moayya. The restless forms of the human soul

The human beingcannot come out of himself, he does not know others except in himself; and, if he says the opposite, lies.
(Marcel Proust, Albertine dìsparue, 1925)

We live in an agitated age: dark forces are at work above our control and our consciences to guide our behaviors and choices in the directions that most suit the strong powers. The exasperated individualism of the so-called “liquid society” is daily shattered against the impotence of the single person facing a collective destiny that increasingly appears as a drifting boat. Those of us that are still sensitive today seem to be skinned alive, they are the sentient receptacle of our existential unease towards a society in which the logic of profit and efficiency seems to have definitively outclassed human istic ideals. As much as we try to silence dissatisfaction and insecurity with comforting and seductive substitutes, the body tells us that something is not working: it is an animal feeling that never abandons us.

The body has immense power; in a dematerialized and standardizing world it continues to be a fixed point because it represents the beginning and the end of each of us. The body is the place of introspection, of self-construction and exchange with one another, and for this reason the oppressive power would like to control, limit and flatten it. In difficult times, the body is simplyreduced to a container of pain, but in spite of everything it continues to exist, to be rebellious and disturbing.

These reflections are at the center of the poetics artworks of Shirin Moayya, an Iranian painter already involved in numerous exhibitions in Tehran, the city where she lives and works, who in  recent years has been attracting the interest of the juries of several international competitions, such as the 1st Dubai Painting Symposium and Residency or the 11th Annual London International Creative Competition, to name a few. The source of her work is the emotional and spiritual experience of reality, which she translates on the canvas with an expressionist language characterized by a strong chromatic accentuation and a powerful emotional deformation of the visual data. In her paintings there are no gradations of colors and shades to create shadows and volumes, but bright and strongly contrasting colors. Three-dimensionality is abolished in favor of a single pictorial plane understood as a battlefield between contrasting forces, the forms are simplified, the colors are sharp and bright, the line is strong and expressive. The painter consciously distorts reality to make it clear that what we see on the canvas is not the reproduction of an object as it appears, but how she “feels” about it; by concretizing her inner perceptions, the artist forces the viewer to live on his/her skin, his/her own sensations, without the possibility of seeking refuge in anesthetic digressions.

In the series of paintings entitled as Inward Organized (2015-2016) large drafts of juxtaposed colors identify the synthesized shapes of enigmatic objects surrounded by an irregular and thick outline, which is no longer the constructive and idealizing design of distant Renaissance origin, but a tool to give drama to the composition. Shirin Moayya engulfs the world and transfers it into her soul and then returns it in a transfigured vision like a hallucination populated by objects-bodies, which seem to stagger and then settle into a new mysteriouse quilibrium. This reconciliation, even if fought, between inside and outside derives from the artist’s ability to emotionally align herself with the objects of her vision and then let the instinct guide the brush without any prior design imposition. In this way what happens on the surface of the canvas is the manifestation of a thought caught in the bud, before the word or theory impoverishes it to make it intelligible.

In the series Human Beings and Forgetfulness (2017-2018) the artist exasperates the caricature deformation of the image and painting becomes a real existential scream. The contour lines propagate like waves starting from multiple psychic epicenters, concavity and convexity follow each other with dangerous rapidity, the color appears stretched as a direct emanation of impulsive and brutal gestures, the palette is rough and at times rude, oblivious to the pictorial refinement that harmonized the slanted visions of the previous series; Inward Organized. In this case the subjects are incarnations of states of mind, moods and alienations generated by an expressive urgency that; transforming themselves into body and flesh, goes beyond the individual dimension to become a universal cry. Each personification appears isolated and shaped by its own monomania, barely contained in the limited space of the canvas, ready to attack the viewer from whom it seems at the same time to expect understanding and help. The pictorial material of these paintings is enriched by the insertion of papers and newspaper shreds that give the image three-dimensionality and that unequivocally project it in the here and now of our contemporaneity.

Shirin Moayya’s lucidity in identifying the peculiar traits of each psycho-pathology shows how the expressionistic accentuation of the pictorial languagedoes not exclude her ability to give a critical and disenchanted look at human discomfort while showing a deep emotional sharing. And it is precisely this capacity for reconciling harsh reality, empathy and pictorial frankness that makes us understand how, for the artist, exposing the inconsistencies of existence is only the first step of a journey of hope animated by the confidence that in the future a new humanism will succeed to re-establish the human being starting from the destruction of the false certainties of the present. 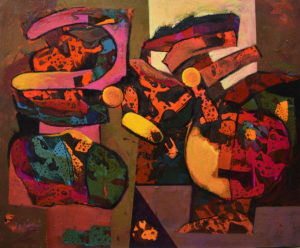 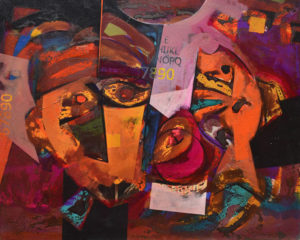 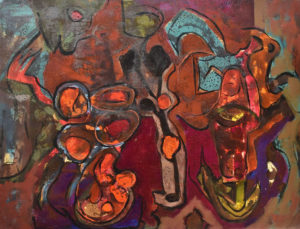 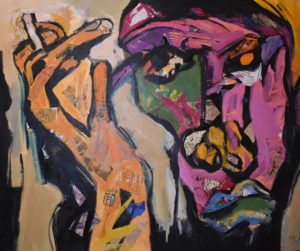