Ren Hang. If life is a bottoml..

The aesthetics of the stereotype. The interior cleanliness of the standard. The exclusivity of minimalism and the ethics of white. Essential comfort, rigorous beauty, geometries of living. A hundred years after the founding of the Weimar Staatlitches Bauhaus, an emblem of the architecture and design of the modern era, the “style” has become an essential dogma in every detail of the human habitat. The impression is that the legacy of the visionary projects of that international handful of artists-artisans has watered down into a generic formalism aimed at productive rationality that blandly imitates its external suggestions in an illusion of functionalism. A quiet homologating patina seems to wade our work and play activities, all carefully planned and contained by an artificial scenario in which everyone can optimize their living space in order to feel special and efficient (just like everyone else).

The collapse of utopias and great narratives is a sign of our times, it is a fact that while it has left us orphans of exciting ideologies, from another point of view it has given us the world as an endless expanse of symbols neutralized by desemantization in which each element appears potentially combinable and compatible with any other. Surprisingly, the result of this individualization of meaning does not result in the most unbridled anarchy but in an even more rigorous conformism, although it is not sanctioned by any objective limitation.

Reflect on these themes Fake marble doesn’t cry at GALLLERIAPIÙ, an exhibition project by Matteo Cremonesi and the duo Furlani-Gobbi curated by Lisa Andreani, which revolves around the theme of design, the beauty of the standard and branding. The show features a rarefied white monochrome domestic landscape, a fictitious oasis in which the furnishings are modular sculptural objects that oppose their enigmatic integrity to the viewer’s inquiring gaze. The works, conceived as withdrawals from the everyday and purged of every human residue, are familiar and alienating at the same time and are united by a sort of aseptic macro-personality that let leak out the background noise of history and the murmur of doubt.

The photographic work of Matteo Cremonesi directs a poetic and analytical look at a series of utilitarian objects (such as appliances and office equipment) that characterize our daily and working habitat and that globalization has spread to every latitude. His focus is on enlarged details of surfaces that emphasize their derivation from the world of industry and design and that close-up shots return as if they were monumental architectural prototypes. Their unreal politeness embodies in an exemplary way the typology of environment that contemporaneity encourages, an apparently neutral environment in which the shape trend determines our postures and behaviors. The harmless roundings and the reassuring smoothness that characterize this type of object pretend to satisfy our senses to function as agents of a gentle but inexorable visual colonization.

The genetic predisposition of these forms to be everywhere without the need for adaptations transforms the fruition of the world into a universal media experience in which the experimentation of things becomes an infinite recognition of identical or similar elements. The vertigo of déjà vu, the already seen before seeing and the wonder for an encounter with the always procrastinated different lead the artist to reflect on the linguistic background of this blown homologation. The critical awareness of the ideological dimension of aesthetics does not prevent him from prefiguring new horizons of sensitivity and content starting from this (induced) epidermal fascination for the materials and surfaces of contemporary living, rising to a metaphor of a futuristic space – temporal ubiquity and the a priori knowledge that would derive from it. In Fake marble doesn’t cry these visionary suggestions are put in relation with an unexpected historical perspective: the ordinary frames that enclose the photographic images of Matteo Cremonesi host inside them (in addition to the use instructions left on sight) also pages of old volumes of art history inherent to Romanesque architecture. This approach, which on the one hand clarifies the artist’s archaeological attitude towards his subjects, brings out a compelling inventory of formal analogies that confirm the theoretical assumptions of his intuitions. If at first glance the eventful Romanesque aesthetic seems the perfect antagonist of Ikea-style interior design, the multiplication of formal references on a structural level underlines how the massive diffusion in Europe of the same tiles and architectural canons between the 10th and 12th centuries were the result of an equally pervasive ideological format, at the time of a religious nature.

The analysis of the explosive consequences of this philologically improper stylistic combination continues in the works of Furlani-Gobbi, who seem to collect from Cremonesi the witness of the finding to extreme it in a production of hybrid prototypes generated by a hyperbolic mixture between the canons of the two historical periods. The cornerstone of the mental landscape that the artists present in the exhibition is the figure of the styloforo lion, ancient guardian of sacred spaces and exotic relic of our glorious architectural past. In the video that opens the exhibition, the lion finds himself immobilized at the center of an aseptic virtual domestic space as a helpless custodian of a 3D-digitized realm, an impersonal setting halfway between home design software and science fiction animation. Around it, despite being inert and heavy even if made of only pixels, the incessant decomposition and assembly of an austere collection of prefabricated furniture takes place, while a voiceover tells how the continuous reorganization of space depends on the movements of a colony of invisible ants settled in the interstices of material emptiness. The narrative, which identifies in the ants the fulcrum of this artificial microcosm, functions as a subliminal conditioning that causes an indefinable uneasiness to grow under the disturbing resemblance between the hostility of that sparse environment and the aesthetic standards that guide the furnishing of our living spaces.

The styloforo lion then exits from the screen to become a bench (also removable and convertible into other functional elements) at the service of style and domestic comfort. Irreversibly hacked and corrupted in its form and function, emptied of the aura of terror connected to the great ideological system that symbolically was called to defend in the past and definitively submitted to the logic of the new, its function is reduced to support for the use of small utopias standardized households. If the production processes of the contemporary world have progressively reduced the importance of manual skills, in this prototype the artists perform a reverse operation, creating a sculpture by hand that interprets and synthesizes the stylistic features of industrial design. The same minimal formalism returns in the handrail-display that redesigns the space of the gallery and in the mobile clothes hanger reworked as an exhibitor of images, both made starting from a paradigmatic modularity extrapolated from the Ikea catalogs. Also in this case it is not an anachronistic nostalgia for the past, but a careful critical exploration of the creative paths and the glimmers of freedom inherent in every formalized language. 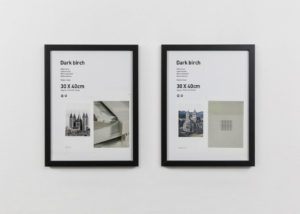