SLAG. In Gallleriapiù the metropolitan bestiary by...

The halves of the latest avant..

SLAG. In Gallleriapiù the metropolitan bestiary by Marco Ceroni

Marco Ceroni (Forlì, 1987) experiences urban space as if it were a magical jungle, a universe made up of parallel worlds inhabited by tribes of people in symbiosis with their own visions: although they move in different space-time interstices, sometimes they intersect and the unexpected arises from this encounter. In his works, the artist manages to materialize that moment of crossing in which the codes, mixing, cause surprise to arise, “the magical moment that gives us the emotion in front of an art work”, to remember the intelligent words by Lea Vergine, who died very recently. Marco Ceroni draws his vocabulary from the street, understood as an explosive mixture of concrete, glass, lit headlights, vandalized buildings, speed bollards, fences, car tuning, spray cans but also rap and trap music, street wearing, cult films, friendships, insults and leaps into the void. Metropolitan suburbs and provincial districts are for him ecosystems of things to which his gaze adheres, attracted by the alterations that make objects lose their real value, transforming them into infinite sketches of stories-traps. The street is a place full of contradictions and contrasts generated by the collision between the banal of the everyday and the uncanny: the gashes made in the saddles of the motorcycles to vent boredom then become menacing tribal masks, the sidewalk a drop in height to bite and the abandoned carcasses of cars in the Milanese hinterland sparkle as if they were gold. The interventions of the young artist from Forlì give new shape to the landscape and offer the observer an experience of contamination and travel in which fragments of decontextualized and modified reality are magnified until they push the dream to the surface.

Among the most recurrent elements of the urban scene in Marco Ceroni’s poetics we find the components of the scooters illegally disassembled and re-assembled in the courtyards of the houses, the most iconic of which is perhaps the hull of the Booster (MBK 1990), a leitmotiv in his art production in recent years. And precisely this form is the matrix of the SLAG exhibition in Gallleriapiù, which was born as the result of an artist’s residence at the Carlo Zauli Museum in Faenza, a virtuous local institution that for years has pursued the mission of exploring the relationship between ceramics and contemporary art by inviting international artists who usually do not use this material to compare their creative languages ​​with the archaic solicitations of the earth to be cooked. The artist, initially oriented towards radical physical samplings of reality reassembled and transfigured with the tuning technique, had for some time begun to shape artificial materials such as fiberglass or concrete. In the encounter with clay he discovers the possibility of a more massive modeling intervention and the opportunity to express a more meticulous attention to undercuts and details. With the irruption of the new creative medium, the combinations and contrasts between materials that substantiate his aesthetic research are translated into the internal tension between the different aspects with which ceramic can be stabilized: it is always a matter of taking reality, but the physical presence of the real element disappears, which is replaced by their formal and imaginative existence.

And therefore SLAG (SCORIA), unique title for each piece of this collection of sculptures, is the repeated cast of the same motorbike hull, inside which Marco Ceroni intervenes by modeling always different teeth worked with clay in shape, which emerge from textures borrowed from the mechanical and animal world. The antagonism between the two different souls of these creatures, the last descendants of the crazy medieval bestiaries, is emphasized by the effective choice of colors, which in their basic palette give back a sort of urban camouflage. The three selected shades (a concrete-gray earth, a tobacco color and an anthracite color) correspond to the natural chromatic ranges of the fireclay used and in each work they are presented both in the version left raw, usually the exterior, and in a more lucid and humoral version, normally visible inside, generated by the application of a transparent crystalline which in the second firing phase also brings out the colored pigments originating from the earth. The arrogant organic viscerality of the interior, which we imagine soft and preciously alive, brings back to an idea of ​​orality as a satisfaction of basic needs, but also as an aggressive language, as urban slang where invective is formalized in the structure of the contest, an underground form of urban conviviality. But in the cracks, similar to clods of earth or to the surface textures of tires, in which the teeth are stuck, we also find the idea of ​​clinging tenaciously to the road which, together with the ergonomic design of the jaws, could be the attribute of the latest model of sneakers, another suburban fetish.

At this point the street imaginary accelerates and meets the idea of ​​the brand, which leads Marco Ceroni to re-read the gallery as a Temporary Store (complete with site specific designed pedestals-displays, whose slightly wavy shapes recall the ramps of skate parks) for the launch of SLAG and to activate a real featuring with other artists who share his same background and with young exponents of fields outside the art system. The idea is to move on the border between various circuits talking about a series of individually autonomous works as if they were products belonging to a collection, highlighting how close the working methods of the art field can be to those adopted in other branches of the production and communication, such as music or fashion. This intuition, unsettling for the frankness with which it is manifested, does not undermine the individual personality of each of these unique pieces, but exacerbates their hybrid status, poised between rebellion and limited edition and causes the repetition ends up amplifying their mutual differences.

Among the travel companions of his digital and camouflage campaign, Marco Ceroni involves Stefano Serretta and Giorgio Bartocci, authors of a four-handed wall painting in the gallery, whose concept recalls the communicative dynamics of brands and the custom of homologating the setting of a store to the characteristics of the new collection, as if the space itself worked as a generator of subliminal messages. Serretta’s exploded lettering therefore merges with Bartocci’s organic and receptive painting in a refined convergence of gaze that never strays from the relationship with the sculptures. The raw and spontaneous talent of Toni Brugnoli, photographer of the Milanese scene, is entrusted with the media launch of the works, while the graphic designer Gabriele Colia takes care of development of the visual identity and the design of the packaging, which is suitable for transporting a fragile object by courier, complete with a label with technical specifications, barcode and certification from the Carlo Zauli Museum. Also participating in the creative flow of this labyrinthine game of appropriation are Veronica Santi, author of the promotional video trailer shot inside the museum, and Stefano Maniero with his still life images that wink at the commercial world. To end the tale of this exhibition, an example of experimentation based on a farsighted triangulation between an artist, a museum-laboratory and a gallery to support the creative process, we recommend #slagcontest, a competition on Instagram that will assign a lucky winner a SLAG-collar designed by Marco Ceroni. 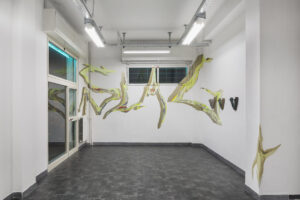 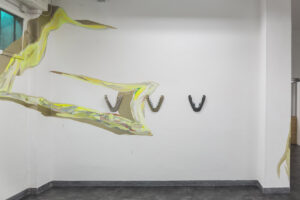 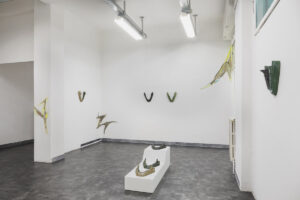 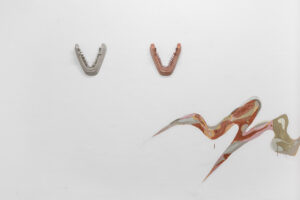 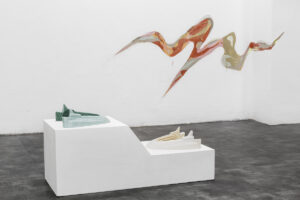 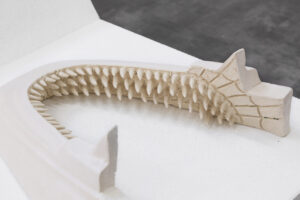