SLAG. In Gallleriapiù the metr..

The halves of the latest avant-garde. Brief histor...

The halves of the latest avant-garde. Brief history of Enzo Mari and Lea Vergine

Giulio Carlo Argan combined the meeting between Enzo Mari and Lea Vergine. They met in 1965 in Naples, he was 26 years old and she was 20, to write in the new avant-garde magazine Argan had created, Libera struttura. A year later they were in love, tied to a double thread that lasted forty-eight years until a few days ago death broke it, first one, then immediately after the other, the next day, in a happy coincidence of love. A free structure in name and in fact the union of Enzo and Lea.

Two contrasting characters: she with critical verve, energetic and shameless outspoken, he a docile but politically aligned designer-thinker; she bulwark of the latest female criticism of Italian art; he “conscience” of Italian design. She for the superfluous and excess, guided by the idea of an ideal art that is never useful, he is the creative designer of the useful, animated by the goal of an ethically beautiful design. In Italy, where traditionally the excellence of male art criticism has always triumphed, Lea Vergine has represented everything: a free and responsibly critical pen, regardless of the judgment of others but meticulously attentive to one’s own, fierce like no other of her male colleagues (it should be said) has been able to do. A butterfly with a powerful wing beat, Lea flew over the contemporary arts, pollinating them with an interpretation that was not at all literary and frivolous but full of content and justified objections. The body as language (1974) makes her acquire international fame and assigns her the primacy of Italian expert in body-art; The other half of the avant-garde 1910-1940, exhibition in 1980 at Palazzo Reale in Milan, remains a milestone: it presented the works of over one hundred female artists unjustly deleted from historiography, from the point of view of a woman who did not embrace the convictions of radical feminism. In fact, according to the healthy nature of the profession, Lea Vergine was not only a writer but also a curator. In 1997 she curated the exhibition TRASH at the Mart museum in Rovereto, “a great metaphor of life and of art itself” (domusweb, 2006). However, the dedication is for writing: white fly in a family that would have wanted her to be a pianist or jurist like her father, she enrolled in the faculty of philosophy and her first exam on Plotinus, somewhat mysteriously, makes her understand that what she wants to do is art criticism. Despite her foiled musical career, the musicality of words remains a fundamental feature in writing, so much so that she herself will say: «The best compliment ever received? “Lady, your piece sings”». And in fact Lea Vergine’s writing really sings, not like a melodious lyre a bit sweet but with the rhythm and strength of an iambic trimeter:

“Criticism is compromise and struggle and not the alloy of tolerance for peaceful coexistence: it cannot limit itself to giving an account of what it is (through a diligent analysis or a para-epistemological treatment), but must risk what must be. Criticism cannot be experimental; utopian yes. The trouble is that in most cases we are faced with literary translations while art criticism is – to paraphrase Doubrovsky – a particular branch of the visual arts that has the visual arts as its subject “(L’arte in Gioco, 1988).

Knowing how to criticize for Lea Vergine meant “first of all knowing how to write in Italian, which is very rare for today”, then the knowledge of all the arts combined with a “cautious sarcasm”. Enzo Mari, on the other hand, certainly appeared milder and more good-natured. Designer who had nothing to do with the current ones, an all-round artistic personality, in the fifties he followed the kinetic art trend together with Bruno Munari, in 1963 he coordinated the “Nuove Tendenze” (New Trends) group and participated individually both in the Venice Biennale and both in the Milan Triennale. From his influence and friendship with Munari, one of his most beautiful projects was born, the 16 animal puzzle, also developed in the 16 fish variant and produced in 1957 for Danese. Among the most successful examples of design applied to a children’s game, the puzzle consists of an interlocking table-structure in solid oak whose single continuous cut draws the stylized figures of sixteen cute little animals that inhabit the rectangle. The graphic sign also distinguishes Mari in his serigraphs, many of which are worth the partnership with the Boringhieri publishing house for which he designed a hundred covers. From the austere ones of the works of Sigmund Freud and Carl Gustav Jung to the multicolored ones of the paperbacks of the “Biblioteca Boringhieri”, to the memorable ones of the “Universale Scientifica” born in 1965 and characterized by the two black bands that trap a graphic game in the center cover which it is differently repeated in 12 squares. For Danese Mari also designs the famous Formosa (1963) and Timor (1966-7) calendars. An example of the latter will become part of the MoMA collection together with many other objects including the Tonietta chair (1987) which will mean for Mari the third Compasso d’Oro – no less than five in her entire career: 1967 for “individual research on design “, 1979 Delfina for Robots, 2001 Legato for Driade, 2011 for his career -.

The love agreement of a lifetime between Enzo Mari and Lea Vergine is not the only one, although the two appear militant in two factions at times diametrically opposed – the criticism of the arts and design -, they are the complementary symbols of the creative invention: hermeneutic circle on the one hand, project and passion – to quote Mari’s homonymous essay – on the other. Union of two halves far beyond the avant-garde that leave a very delicate climate because” I add, “it is not a matter of a break between old and new situations, but of a call to witness within the same new situations” (L. Virgin, op cit.). Words from several years ago, yet incredibly current. 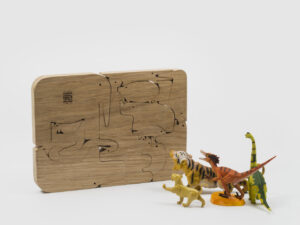 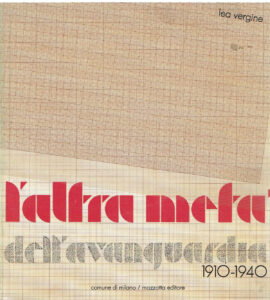 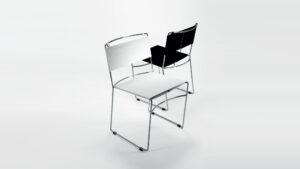