Sonia Andresano and Sebastiano Bottaro. The loop a...

Sonia Andresano and Sebastiano Bottaro. The loop as temporal and spatial mimesis

In 1929 Marcel Duchamp, following some kinetics’ experiments, began to produce videos – one being Anémic Cinéma, a film of a disc marked by circular shapes that rotated in a loop, alternated by surreal tongue-twisters with no logical sense. Observing this video today, we can note how Marcel Duchamp’s aim was to stun and hypnotise the spectator with mysterious messages in order to unveil unconscious contents. Furthermore, the loop of the rotating shape disrupted the value of time – intended as a succession of instants of the same duration.

Nothing like Marcel Duchamp’s work Anémic Cinéma can better introduce the focus on the exhibition Looper. Dedicated to Sonia Andresano and Sebastiano Bottaro and on view until May 29, 2021, at the artist-run space Spazio Mensa, located in the space of Citylab971 – previously a paper factory – on Via Salaria, in Rome. The exhibition project is the result of a dialogue amongst the two artists, who reflect on the meaning of repeated action and the consequent suspension of time, so that the pictorial and installation works on show reveal the impalpable mechanism of jamming and repetition. Sonia Andresano (Salerno, 1983) confronts this theme with her conceptual and poetic approach to life’s flow, while Sebastiano Bottaro (Noto, 1993) creates works using mixed techniques, with an anti-programmatic and anti-academic approach.

The exhibition Looper clearly demonstrates that time and image are indivisible elements. As the philosopher Henri Bergson states, a state of temporal mimesis is fundamental to the understanding of the image, since “problems concerning the subject and the object, their distinction and their union, must be posed in relation to time rather than space“[1].  Following this condition of mimesis, the viewers who visit the exhibition are confronted with the works in relation to the notion of time. And even though the artists use different media, they manage to maintain a solid dialogue, since the power of this comparison lies precisely in the difference in media. The two critical texts in the show – by Giuseppe Armogida and Gaia Bobò – are also exemplary, since they offer an interpretative stimulus. Without imposing a heavy burden of explanation on the visitors, breaking with today’s tendency to lead them – with a wealth of information – towards forced exegetical currents.

Sonia Andresano’s installation – entitled ritenta, sarai più fortunata (Try again and you will be luckier) – is an eight-minute video installation of four sculptures of cathode ray tube televisions and four video projectors. The artist shows an accurate study of the status of the object and the value of action as a reflection on existence in the world and on human action in relation to the space we live in every day. With this premise, Sonia Andresano succeeds in extrapolating the burdens of daily existence in a conceptual key, while maintaining an expressive poetic element that incorporates the tensional and emotional state of the human being. Thus, according to a complex optical device, the video is reproduced on the walls, while four other points of view (of the same) are projected onto chalk skeletons of cathode-ray televisions placed on small tables. The video presents a gymnast repeatedly attempting to perform a handstand on the amorphous, iridescent surface of a disused sofa. The installation’s strong point lies in the deliberate positioning of the wires on the floor, intentionally arranged in a state of confusion – choosing to use objects found in Citylab971, as if to re-emerge artefacts from a disused reality, considered as a form of a temporal trace’s legacy. All these aspects are also intended to characterise the place where the video was filmed, the ex-theatre of CityLab971, where the diffuse background audio track derives from, rendering the city traffic of the ancient consular road. Hence the objects, charged with the value of a vestige of a lost time, re-emerge through the installation as aesthetically relevant objects, stimulating a reflection on time, which has its centre of gravity in the visual action of the gymnast, busy exercising on a handstand that never seems to end.

The formal techniques used by Andresano are extremely precise, as by touching the plaster skeletons of the cathode ray tubes we can notice the maniacal care with which she managed to re-create the object in a surprisingly real way, with the aim of destabilising the spectator, making him grasp the deceptive objective value. Andresano’s creative audacity lies in his decision to delegate the exercise of the handstand to a gymnast with unexceptionable physical skills. This choice is part of the artist’s creative coherence, which is to be noted as well in the video Barcode (2020), where the artist Simone Cametti is filmed walking on the railings of a gate in the Roman countryside. The message is unequivocally clear: even those who are physically and psychologically predisposed to face a challenge may find themselves in difficulty. And it is precisely with this logic that ritenta, sarai più fortunata (Try again and you will be luckier) is to be understood as a work of various conceptual shifts, which lies in the act of repetition, useful in the tenacious achievement of a goal – her loop to be considered a form of hymn to life and to all the difficulties we face every day.

On the other hand, Sebastiano Bottaro’s works are presented as a quest for a radiographic type of spatiality and temporality, organised by levels and superimpositions of metallic colours. The works seem to have arrived from intergalactic spaces, populated by black holes and governed by physical laws independent from those on Earth, due to their telluric and metallic tones. Dots of colours stimulate us to imagine the artist’s creative verve as belonging to a distant planet, while also highlighting his ability to let himself be swept away by the creative pathos, according to his own logic – self-referential and independent from that of Earth’s.

Hence, Bottaro’s works seem to be the only trace that reached us from galactic space, where he is free to create. And in the descent towards our planet, his works seem to have kept a trace of the vibrational beats that have suddenly broken the lines on the supports. From this perspective on Bottaro’s works, it looks as if the photodynamic grates exploded, with unexpected energies gushing forth from its underlying levels. This way, the artist breaks and uproots the links with the world, where sense of repetition reigns supreme. Another characteristic aspect in Sebastiano Bottaro’s works is the particular attention given to the titles – Il bastone e la carota (The stick and the carrot), La mollica che mi soffoca (The crumb that suffocates me), Il cane senza coda ha perso il collare (The dog without a tail has lost its collar), Dall’elefante senza zanne (From the elephant without tusks). All paradigms that open up towards a hermeneutic signification of the contents and reflect a form of creative freedom that is typically surreal, which in some ways recalls the phrases transcribed by Marcel Duchamp in the spinning looped discs of Anémic Cinéma.

This emancipation from the creative act is the same force that leads the artist to be a serial accumulator of the rigid syntax of lines, but which in the end breaks and drips on the support as a form of allegory for anti-academic painting. The interrupted ripples look like radio emissions of a mysterious language that send out looped vocal traces, but which suddenly jam. Bottaro appears as an artist interested in creating the phenomena of life rather than representing them, so that among the interrupted lines emerges a daring explosiveness of colour forms, as if they were moments of undermined life, eternally clinging to their support.

Finally, if we were now to ask ourselves the true meaning of a looped image or action, we would have to go back to the vehement instance that seems to undermine the works in the exhibition, where the loop emerges as a form of reflection of the Bergsonian logic of mimesis that unites image and time. 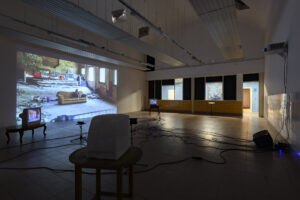 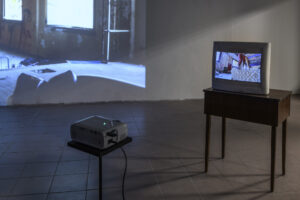 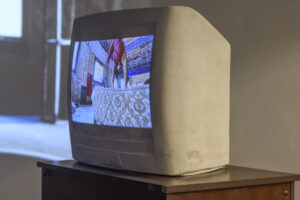 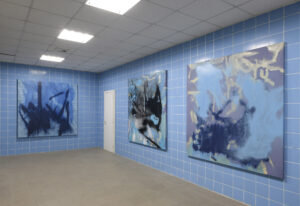 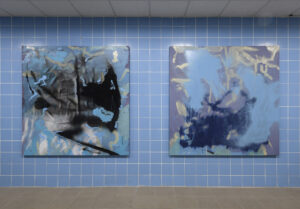 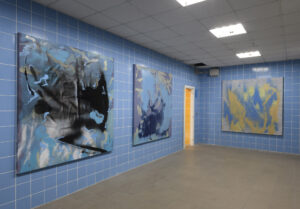