Stefano Serretta. Emptying everything as an act of...

Stefano Serretta. Emptying everything as an act of love

On the occasion of the Shoegaze exhibition at the Italian Cultural Institute in Stockholm Stefano Serretta released an interview to Juliet.

You can begin by telling me how this project started.
The project started with a deep immersion into the world of online communication platforms, a series of instruments commonly used by those heterogeneous communities often labeled as “alt-right”. This slippery infosphere, frequently underestimated because of its appearance of harmlessness, represents an incubation chamber where discussions and practices arising from the Internet’s outskirts get under the skin of contemporary political communication.
I analyzed this verbal and visual imagery – a mix between pop culture and nerd esotericism – then I returned my impressions with a greater expressive immediacy, exploring what is a hegemonic space for the formalization of contemporary public sentiment. To do this I recovered alley tactics and street strategies from my own background: a peculiar approach to the act of drawing, a certain use of the visual speech, to the reinterpretation of the architectural space. Newspapers work both as a tool to manipulate the architectonic environment and as a medium useful to host a visual imagery that lives between reality and verisimilitude.

Power and communication are linked by not-so-invisible cables containing a number of forces and messages. A sort of pipelines that you might have traversed in some shady parts of the web. Did Relapse begin from those places?
Exploring this field has been more like swimming upstream, looking into the causal relationship between online actions and offline consequences. I was born in an analog-native generation that grew up in parallel to the digital revolution. Although I am close, I feel far away from the way of thinking and interacting with machines used by digital natives. This causes me a considerable displacement. At the same time, it is an interesting medium for the visual and textual contents that creates. There are no preconceived ethical judgments. The collective mental shocks and psychosis generated by the advent of social networks have long been there for all to see. Yet, it is not obvious that most of the images that have an active role in consensus building and that are reproduced via memes on mainstream web-portals also have their origin in places that potentially easy to access, even though quite still uncharted – discussion boards like 4chan’s /pol/ or 8chan among others. Entire communities share the same motto “repeat a lie hundreds, thousands, millions of times and it will eventually turn into truth”. We live in the era of Pirandellian verisimilitude, truer than truth, and the consequences are both political and economical. Andrew Anglin celebrated trolls’ role in the rise of Trump, Gianluca Lipani made money spreading panic via fake-news.

Are you talking about a failure?
The failure is mainly a pretext to establish a dialectic relationship with Gio Ponti’s building from an institutional and architectonic point of view. The act of emptying is only apparent. When you observe the installation from the inside it becomes almost immediately a space to think and establish a distance – or a proximity – with the narration developed on windows through the printed newspaper.

How did you handled the space, an architecture designed by Gio Ponti?
Since the first site visit, I have been fascinated by the several identities that inhabit the magnificent structure. It hosts some of Gio Ponti’s best designs: from the Superleggera to the furniture tailored for decorating the rooms, from the library to the auditorium. It was inspiring to perceive such an aura of suspension, an influence that places that space in an uncertain timeline. It brought me to think about its lost opportunities. Going back to your previous question, the failure that I am addressing is that of the mythology in which, and by which, Ponti lived. A failure inherent in every age and belief, framework or philosophy, that is confronted with the unrelenting passage of history. Hence the decision to empty the space, to dry it to the bone, an action that in a certain sense may be considered one of care and love, like the evisceration of a body destined to mummification.

Triggered by your statement on the discourse on capitalism, the man of today seems to lack a centre and he is barely, if at all, capable of inheriting. I intend this term not in the sense of a downturn to the past, but of a resumption, what Kierkegaard explained as “moving backwards while advancing”. Do you think that the codification of a new language is underway, a new coding of symbols deprived of the moral and ideological supports that were present in those historical periods that we recently left behind? How was the drawing process useful for the development of your latest analysis?
It is certainly tempting to see in this political cycle the return of some ideologies of the last century, even if somehow turned in an absurd tone. In Relapse I paid particular attention to one fact: when we are talking about social platforms the medium is the actual message. The message is that networks are individually shaped and can be as much individually dismantled or renovated. Nihilist cynicism – coded as evil rather than dark humor – is the figure of a community representing itself as “chaos agent of the contemporary society”. The pages of my newspaper are populated by characters depicted in grotesque poses or in moments of extreme laugh, a hysterical behavior that is very close to desperation as if their lives were stuck in a sort of mass hallucination. We are dealing with heterogeneous swarms in which identity resentment takes over social solidarity, in which the only volatile cornerstone existing is built around the individual desires. The act of drawing has been my personal immune reaction as if after an extensive research I needed to take a step back (or forward) in relation to this analytical process. 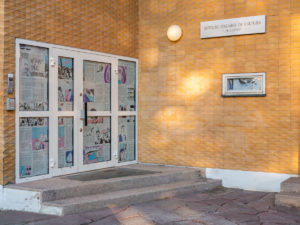 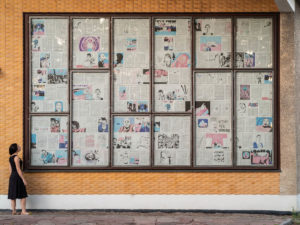 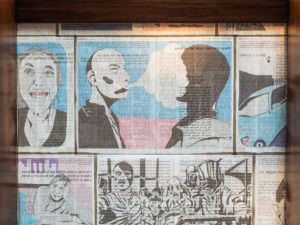 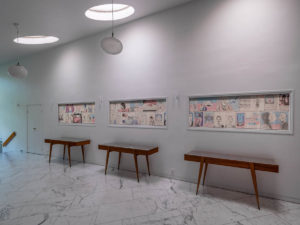 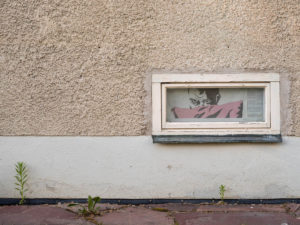