Farahnaz Oliyaie. Painting as an expression of the...

A conversation with the artist..

Farahnaz Oliyaie. Painting as an expression of the human soul

“You must have chaos within you to give birth to a dancing star.”
(Friedrich Nietzsche. Thus Spoke Zarathustra, 1885)

Human existence is based on a fragile balance between the events of the external world and the inner resonances; a kind of reality that we are immersed on it and provokes our unconscious; our emotions, thoughts and visions that shape our memories and experiences are born from it. This liminal space between objectivity and projection, accessible to instinct but impenetrable to a rational approach has always fascinated generations of artists; like sensitive seismographs that record the complexities of cultural world, even before it is analyzed from a histographical and sociological point of view by the official culture. The variegated expressive vocabulary of the visual arts allows us to bring to light and immediately communicate perceptions, doubts, anxieties and premonitions of our times even when their embryonic state refuses to coagulate into words, theories and coherent thoughts. This is why art is an osmotic and magmatic language in which the suggestions of reality interpenetrate with the most intimate sphere of the human being to return floating in universally perceivable and freely introjectable forms.

The incessant exchange between reality and its inner assimilation is at the center of Farahnaz Oliyaie’s work (1965, Semnan), an Iranian painter who in just three years of activity has reached an extraordinary expressive maturity. Stylistically similar to the most interesting results of historical Expressionism, she proposes four-visions in which the deformation, the simplification of forms and the use of pure colors spread with violence to create a powerful synthesis between the chaotic visual emergencies of the world and their inner decantation. Her paintings are spaces of freedom open to the swarming succession of situations in life in which figurative fragments coexist without contradictions with abstract painting passages to exalt, exasperating it, the emotional side of reality with respect to that objectively perceived. The apparent dystopia of her images is only the first step of an inner reconstruction of small and large events that took place before her eyes or perhaps only in her imagination. We no longer refer to the eye, to perception, to the way we see external reality, but instead we pay attention to introspection, to the way in which individual sensibility captures the world. The brush takes on and follows the natural fluidity of a thought that is still uncertain as to which direction to take, of a state of mind that is not yet fully manifest, of an unexpressed fear.

The most recurrent subjects of Farahnaz Oliyaie’s paintings are street  scenes or inner city scenes in which stylized and elongated human figures share the space with objects (and sometimes animals) without respecting any hierarchical order or precise division of roles (role-sharing). There is no distinction between figure and background and all space is significant. The signs juxtapose or intertwine with each other without problems of perceptive ambiguity and the sense of the whole is given by the energy, the color combinations, the dimensions, the connections, the empty spaces. The world represented by the artist is in constant transformation, it is a mental environment full of emotions, energy, warmth and life in which references to contemporary society, popular art, primitive cultures and musical expression are mixed without ever degenerating into chaos.

It seems that Farahnaz Oliyaie wants to add pressure on the visible to extrapolate the subtext and deconstruct its consolidated appearances to free its imaginative potential and compose new fragmented stories no longer subject to the laws of consequentiality and temporal and spatial coherence. Freed from reality, her characters live in a virtual and immanent space that finds immediate points of contact with the viewers’ imagination, who are required to fill the gaps in the narrative with their own personal experiences. It is therefore not a question of reconstructing an already written story, but of using the clues scattered on the canvas as privileged accesses that lead to the unconscious, inexhaustible matrix of narratives that rework the reality to probe its most hidden implications.

The metropolitan settings of Farahnaz Oliyaie are a concentration of vivacity and humor; the city, from which the artist feels attracted and rejected at the same time, appears as a chaotic feast of colors and shapes on the verge of imploding. The close and slightly lowered viewpoint enhances the idea of ​​crowding the streets and gives the compositions a surreal and claustrophobic atmosphere in which the frenzy of contemporary life made of lights, reflections, rides and means of transport, seems to have definitively outclassed the biological rhythms of human beings.

In some interior scenes, which we can imagine allude to the working conditions of a globalized world in the pursuit of capitalist profit, the characters appear empty and inexpressive, similar to mannequins, besieged by disturbingly oversized objects that seem to portend a danger and a threat even towards of the spectator. These paradigmatic entities, which represent the anonymous and impersonal mass that populates any metropolitan city, are counterpointed by other anthropomorphic shapes no longer stiffened by professional clothes that dance free and regardless of gravity.

Other visions, in which the strong chromatic contrasts give way to melancholy gray scales, show dreamlike settings in which fragile anthropomorphic silhouettes appear lost in cold and hostile atmospheres generated by the fury of natural elements or enveloped by the even more uncontrollable tensions of their inner anxieties. Sometimes the deformations, as happens for example in Dance and Play, come to completely remodel the figures in an inextricable tangle of signs, demonstrating how painting is perhaps the most versatile medium to represent the inexpressible nuances of the human soul. 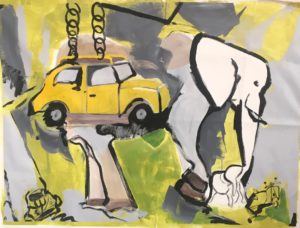 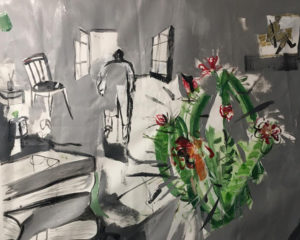 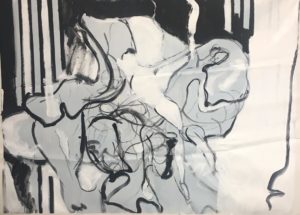 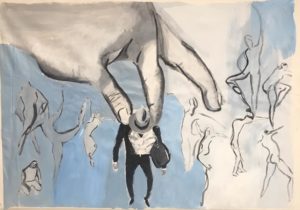 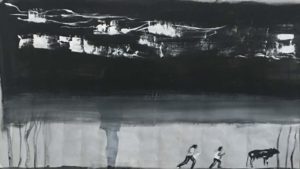