Mahin Monfared. The color of e..

Genoese artist, lives and works in Monza. Active since 2001, Elisa Cella had her last solo shows at the Galleria Villa Contemporanea in Monza and Spazio Azimut in Brescia, in collaboration with Galleria E3 Arte Contemporanea. She was a finalist in Combat Prize, Celeste prize and European Arteam Prize. Her works are permanently in the Museum MAC of Lissone (MB) and in the Civic Collection of Drawing in Salò (BS). Among the next exhibitions: “Nude and figure” at the Visconti Tower of Lecco curated by Simona Bartolena and Armando Fettolini, and in autumn a panoramic exhibition on young Italian painting curated by Vanni Cuoghi at the Balestra Foundation in Longiano (FC).

Erika Lacava: You told me that you don’t currently have a studio, unlike a few years ago. How has your work changed in terms of inspiration, concentration, volumes or themes compared to when you had a studio?
Elisa Cella: In the past I had a studio in Milan and in recent years I have changed several houses before the current one, but in all of them (including my in the mountains!) I have carved out the space for a studio. The studio creates a work unit: it is both a warehouse, a planning place, a workplace and an exhibition gallery. In this house I had a very large space available to use as a study, but unfortunately it is now rented. I will be able to get it back in mid-July of this year. Currently the lack of a dedicated space has created a dispersion of work. I moved in a garage the large chest of drawers with the old drawings, with which I started my career as an artist, such as the packed paintings, thus separating me from my past. Here the whole house is a study: colors and sheets are ordered in two chests of drawers in the corridor, in the living room there is an easel for working, on the veranda there is space to dry the works, on all the walls – apart from the rooms – there are hanging works, in the library there is a section of art books and catalogs. It was inevitable to mix life and art.

E.L .: What are the advantages and disadvantages of this choice?
E.C .: Undoubtedly it is advantageous to be able to always work, as soon as I have two minutes available, but among the disadvantages there is the anguish that work can be ruined accidentally, especially with children at home. Once the cat jumped on the easel ruining the wet picture! (she laughs). Working on large sizes is also more complicated. Before, I could make large models and leave them on the ground, while now I have to fold and put them away, then again reopen, fold and order them. It is physically and mentally tiring, an unnecessary waste of energy. But after a while I got used to acquiring another way of working. Before I knew that I could go on from where I left off, but now there is a time in between which is the time of other, the time of ordinary life, before returning to work on art. The physical space is also mental: entering the studio you cross a threshold where a protected space awaits you, in every sense.

E.L. Your works range from painting, to sculpture, to installation, passing from canvas, to iron, to plexiglass. What was your evolutionary path?
E.C.: I started drawing on paper, then moved on to painting on canvas until Maurizio Caldirola asked me a work of art for an exhibition with the M.AR.CO association of Monza for a record time, in two weeks. So I made my first installation with washers on the floor, which was followed by the sculpture on the ground by Villa Contemporanea for the collective “Aesthetics Mathematics”, a neuron made with cut, welded and painted pipes. Then I moved on to processing with plexiglass, transparent and therefore visually lighter. Iron is a heavy material but even in that case the works seem light because they are perforated and suspended, and the light creating shadows creates lightness. So I started to inhabit the space in a different way.

E.L .: What is your working method and what materials are in your house today?
E.C .: My working method requires quite long realization times. By the time I finish a job, I already start planning the next one. I often work in series and macroseries: I start from drawings, I let the idea settle and if I am convinced, I realize it. I generally create a small painting or more than one, then a series of larger paintings. Then I stop and maybe pick up the previous series. In the drawer I always have projects of works that sooner or later will be carried out. Even for the sculptures and installations, my work is the same: what I do in the studio is a preparatory work. I design the sculptures and installations on the PC and create the design on the basis of which the modular pieces will be made, which will then be installed directly in the gallery. Working with iron and plexiglass is entrusted to others because it requires skills and a special laboratory that I currently do not have. For an iron work I had to file the imperfections on the terrace … Now I am waiting to have free study to learn to weld personally.

E.L .: The ritual question: how did you experience the lockdown period from an artistic point of view?
E.C.: I have worked less for organizational-family matters. I missed the loneliness of the work, but I still painted. I finished one picture and made another. Then I carried out a project I was thinking about long time, with biological forms of viruses and bacteria that carry devastating diseases, which seen under the microscope are decidedly beautiful. Of course, Sars-Cov-2, the pandemic virus we are experiencing now, has also entered this project. I have been collecting images for some time and sooner or later I will find the key to a new series. 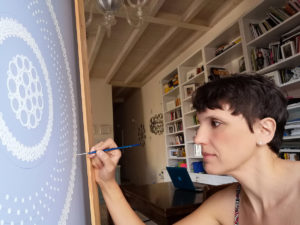 Elisa Cella at work in her studio 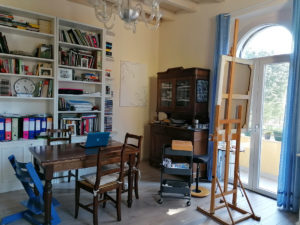 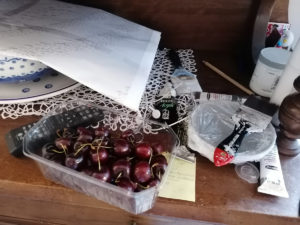 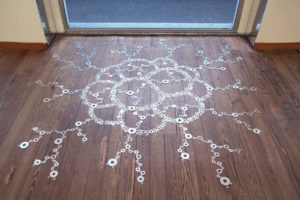