Tales from the soil: Dineo Seshee Bopape at Pirell...

Be Water, my friend | Galleria..

Tales from the soil: Dineo Seshee Bopape at Pirelli HangarBicocca

When the past is still a heavy burden, contemporary art should deal with it, especially if its narrative (often partial and not corresponding to the truth) reverberates on our present. For this reason, it is admirable how carefully Pirelli HangarBicocca gives a voice to artists who are from outside the domain of Western-centrism. The Milanese institution’s new exhibition, Born in the first light of the morning [moswara’marapo], is in fact a solo show by the South African artist Dineo Seshee Bopape, on view until 29th January 2023.

Born in Polokwane (South Africa) in 1981, Bopape questions the socio-political implications of the tragedies that have marked African history. Her multidisciplinary artistic practice (which includes installation, video, wall drawing and sound-art) originates from the reprocessing of images and archetypal elements, which Bopape places in dialogue with technology. The visitor, surrounded by the penumbra of the artist’s creative dimension, finds himself exploring a world that takes on the characteristics of memory and reflection. In a profoundly sensorial environment, where hearing and smell are involved just as much as sight, Bopape creates a path that intersects the roads of decolonisation, identity and history.

The simplicity of the elements with which Bopape works – primarily earth, water and clay – is profoundly eloquent: no frills are needed, nor, above all, any sweetening, to tell the truth of a country, of a population, of a human condition. Bopape’s language is highly poetic, extremely functional and almost never explicit. She stays silent in order to let the element and the symbol speak. Earth, for instance, appears on one hand in its architectural quality, in works such as and- in. the light of this._ _ _ _ _ _ (2017/2022) and Mothabeng (2022), whose domed structures are reminiscent of the traditional South African and Lesotho housing constructions; on the other hand, soil also takes on the onerous task of representing itself, in all its (apparent) simplicity. This is the case of Mabu,mubu,mmu, sa_ _ke lerole, (sa lerole ke_ _)”, 2022, an installation composed of five blocks of earth site specific: five different landscapes that appear as “mere” soil only to the superficial eye. Actually, Bopape wanted to clarify the profound richness of the soil, sprinkling the surface of each piece with ash, gold leaf, herbs and crystals. Earth, therefore, is presented as a fertile and primordial element, whose exploitation constitutes an issue that in Africa is associated with the survival of colonialist activities.

Soil as a symbol of belonging and identity is also the protagonist of the work Lerole: footnotes (The struggle of memory against forgetting), 2017, undoubtedly the most touching of the exhibition. Hundreds of raw earth bricks support the symbolic representation of freedom, which appears in two main forms: firstly, in the sound, diffused through several record players, of African oceans, rivers and lakes and of the chirping of the Quetzal, a holy bird to the Mesoamerican populations; secondly, in sculpture. The installation is, in fact, scattered with fistfuls of solidified clay, representing the powerful gesture of Robert Sobukwe, a South African dissident imprisoned during the Apartheid years: every time a new group of prisoners would arrive at the prison of Robben Island, he would collect some earth in his fist, raise it and slowly drop it. Bopape metaphorically crystallises in flames all of Sobukwe’s fists, freezing them in time as historical records of the claim for land and sovereignty of the South African people. The work, completed by texts that testify the unspoken African resistance during the European conquests, aims at giving back to the oppressed populations the right to write their own history.

Pirelli HangarBicocca, once again, takes an important position in the European institutional context: Bopape’s exhibition, in fact, is addressed to the South African public (and more generally to the peoples which have been and still are subjected to colonialism), but above all it seeks the contact with the Western public. The artist invites us to a behaviour that we should take on as a moral duty: delving into our past, coming to terms with the shadows that brought us to the privileged situation in which we find ourselves, and opening our eyes, ears and hearts towards those who are victims of our prosperity. This is a responsibility that goes beyond colonialist practices and the approach of contemporary art, to embrace the everyday in the form of respect for the other and of self-criticism. 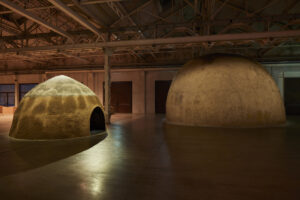 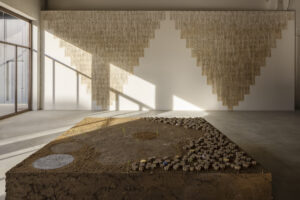 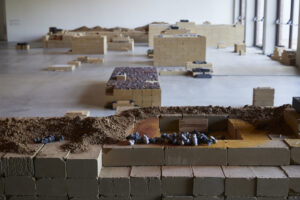 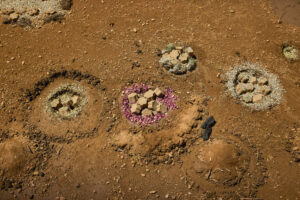