Tetsuya Ishida. Self-portrait of Other

Because I live here. At the TO..

Tetsuya Ishida. Self-portrait of Other

Tetsuya Ishida, after graduating in 1996 at the Musashino Art University of Tokyo, began his career as a painter during the so-called “lost decade” of Japan, a period of deep national economic recession that marked the 1990s in an indelible way. In his afflictive paintings, he captured the feelings of despair, claustrophobia and emotional isolation that dominated Japanese society by depicting with extreme precision the state of mind of his generation after the explosion of the financial and economic bubble that in 1991 provoked in Japan the crisis with the consequent mass layoffs. From the beginning and until his untimely death (for which suicide is assumed) in 2005, when he was hit by a train at a level crossing, the artist created vivid allegories of the challenges to life and morality of the Japanese in paintings and graphic works imbued with obscure Orwellian absurdities.

Tetsuya Ishida’s work explores three main themes: the identity and role of Japan in today’s world, its social and academic educational structures and the struggles of the Japanese to adapt to the social and technological changes of contemporary life. His works convey isolation, anxiety, identity crises, skepticism, claustrophobia and loneliness and focus on some recurring motifs, including portraits of schoolboys and businessmen in symbiosis with their places of study or work and young boys who appear to be physically integrated with everyday objects. Although the subjects of these series seem to resemble the face of Ishida, whose age at the time of realization of the paintings they also reflect, he has always denied that they were self-portraits, but “portraits of others”.

One can speak in this regard of universal self-portraits, a concept from which the broad retrospective that the Museo Nacional Centro de Arte Reina Sofía in Madrid dedicates to the Japanese artist entitled Self-Portrait of Other. Through anonymously individual characters marked by an inexorable destiny, the painter represents contemporary anguish and alienation and the changes that redefine our relationship with work and technology. As Manuel Borja Villel, director of the Reina Sofía Museum explains, on the one hand an absolute identification with work emerges and on the other the non-separation between productive activities and free time, also experienced as a work performance. Gigantic isolation of a society where many young people never leave home, voluntarily reducing their personal relationships to the family and the anonymity of the internet.

And the solitude and disappearance of the individual are at the center of Ishida’s poetry, which captures them with cold and apparently emotionless paintings, enlivened by humorous elements drawn from the Manga popular culture. This anaffective connotation does not imply a paralyzing melancholy but has the opposite effect, provoking empathy in the spectator: the surgical representation of the solitude of these identical characters causes understanding and compassion for their suffering. In fact, Ishida presents the human being completely devoid of freedom and self-determination as the cog in a great mechanism in which people cancel out. Dehumanization is a permanent trait of his characters subjected to continuous metamorphoses that transform them into houses, cars, packages, domestic furnishings or insects.

Tetsuya Ishida is a cult author in Japan, but almost totally unknown outside despite his crisis images being emblematic of the contemporary era in the most technologically advanced countries. Dying young, in ten years of activity he has produced a formidable corpus of works focused on isolation and alienation in a world dominated by uncontrollable forces. His iconic depictions of children and employees suggest a ruthless critique of educational and working processes within systems guided by the imperatives of productivity and competitiveness. The metamorphosis of the human body that blends with insects, technological devices and means of transport and the claustrophobic situations in which the body is physically trapped in holes and constructions or becomes part of an assembly line materialize the impotence of the individual towards an alienating reality that overwhelms him at every stage of his life. In a present without a way out that precedes a presumably even more disastrous future, the only way to the salvation that the characters indicate to the spectator, while not being able to practice it for themselves, is a new search for identity that starts from the elementary need to return to childhood and the intrinsic eschatological dimension of life that the frenzy of a society based on production and infinite consumption tends to repress. 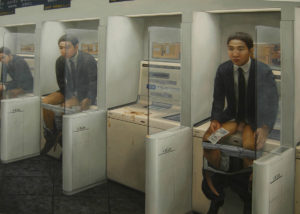 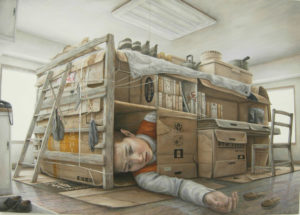 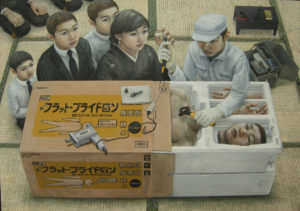 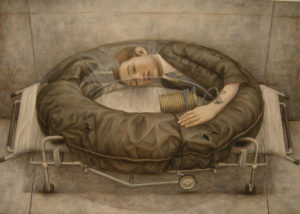