The shield of Achilles. Emanue..

In the works by Paola Pivi (Milan, 1971) the wonder coincides with an ironic short circuit between reality, modified with simple but striking gestures, and the new imagery that comes from the interaction of the public that activates completely unexpected and playful situations with unpredictable shifts of sense. From the beginning of her career, the artist seems to be aiming to challenge the limit to make what doesn’t seem possible: her first work, presented at the Fuori Uso festival in Pescara in 1997, consisted of an 18-wheeled overturned truck on a side. The intuition works and only two years later Pivi wins the Golden Lion at the 48th Venice Biennale by turning a Fiat fighter G-91 jet upside down inside the Italian Pavilion and titling Airplane the installation.

Irony and challenge are inseparable traits of her poetry, which immediately translates her intuitions (which she loves to define visions) without the apparent need to attribute symbolic or conceptual meanings that would weigh down its playful dimension. Her work modifies the boundary between what is real and what is not real through paradoxical redefinitions of scale, volumes and colors that induce the viewer to break down his own rational barriers and to modify his own point of view. Instinct is a fundamental component of her approach and throughout her career she has frequently resorted to animals, the quintessential representatives of the impulsive aspect of which the civilized man seems increasingly lacking, especially in the age of digital and technological mediation . Animals in the middle of the sea (in 2016 the photo of a donkey on a boat taken in 2003 was sold for 227,000 dollars), brightly colored bears made of polyurethane foam, plastic and feathers, a cheetah that walks among hundreds of cups of cappuccino (One cup of cappuccino and then I go, 2007): all subjects that make tangible a dreamlike dimension and redefine the concept of “impossible”. As stated by the artist, her works express “the magic of life” and to do so they use art as a conscious tool to observe their wonder. The titles of the works, in which the words always appear in small letters except the first letter, anticipate her intent to interact with common objects taken from reality by manipulating them with simple and direct interventions, accessible to any type of audience.

The World record exhibition, which can be visited at MAXXI until September 8th, features a selection of works created over the last 20 years that symbolically represent the versatility of Paola Pivi’s poetry. The set-up, perhaps a bit too spatially compressed in a single room, generates a polyphonic contamination between the force fields of intense works, which sometimes seem to struggle among themselves to contend for the space and attention of the spectator. The result is a surreal setting, a funfair of the gaze that infects the visitor with the frenetic presence of stimuli of a different sign.

The exhibition opens with Share, but it’s not fair (2012), a floating weave of hundreds of red and yellow cushions made with the fabrics of Tibetan monks. Their soft and knotted forms, serial but all different from one another, evoke the idea of ​​a community in which the relationship between the individual and the various elements is unique for each of them but at the same time repeated. The enigmatic title – says the artist – is like the lament of a child who has been forced to share an ice cream while not wanting to. Beyond this aerial diaphragm, the staircase changes radically and we find two sculptures (Untitled- gold sofa, 1999 and Untitled- gold and pink sofa bed, 1999) that faithfully reproduce but in miniature form two Italian design sofas from the Nineties imbued with perfume so that their olfactory extensions make up for the reduction in size, expanding their presence in space far beyond their usual boundaries.

Did you know I am single? (2010) also refer to disturbing domestic comfort: we find a bearded skin lying on the ground, similar to a stereotypical hunting trophy, made with a synthetic fur that looks like a paradoxical plush. The tension between the banality of form and the underground play of mystification inherent in the materials calls into question clichés and perceptive habits, unhinging the logical and cultural patterns with which we usually interpret what we see. Behind the bear an entire wall is animated by bicycle wheels (Very fuzzy, 2019) whose rotation is amplified by the application of elegant painted peacock feathers that create an elusive impression of waiting and silent celebration.

The exhibition ends with World Record (2018), an expanse of mattresses on two levels that occupies more than a hundred square meters where the spectator can venture out wearing appropriate shoes and abandoning the standing position. Inside of the habitable fissure, which resembles the cradle but also the containment rooms reserved for the mentally ill, the public can lie down, roll, crawl, make new friends or observe from a privileged point of view the wonderful Roman landscape beyond the the window, experiencing a new relationship between public space and intimacy. 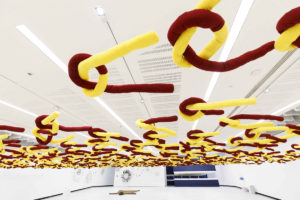 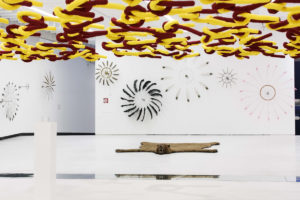 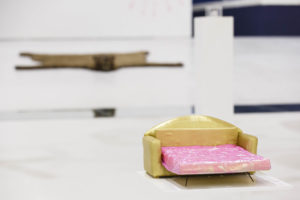 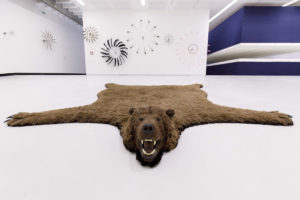 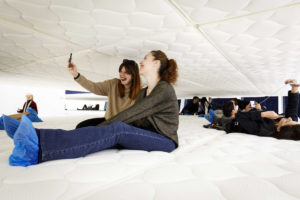