The shield of Achilles. Emanuele Becheri at the Fu...

The shield of Achilles. Emanuele Becheri at the Fuoricampo Gallery in Siena

Often, speaking of drawing as a contemporary practice, the critique usually takes up the myth of the potter Butade, handed down by Pliny the Elder in Naturalis Historia, in the honorable intention of rekindling the legendary aura of this archaic technique.

The quotation from the myth, where the daughter of the artisan follows the shadow of the beloved to impress his effigy, while the skilled hands of the father model a terracotta on the signs, has been consumed over the centuries (Alberti, Vasari, Regnault, Fussli …) undoubtedly contributing to nourish the romantic aspect of drawing, ferried during the twentieth century up to conquer a post-media value (like cinema). The path of Emanuele Becheri, on display at the Fuoricampo gallery in Siena until 11 July, is somatic before than psychic, evolved not only for the longevity gained in nearly twenty years of research but for the increasingly conscious relational tangles of his works. States of mind, characterized by the double location between the gallery and the Hall of San Galgano in the complex of Santa Maria della Scala (open until 6 July) focuses on the intimate and turbulent relationship between drawing and sculpture, presenting some conciliatory pieces of the artist’s recent production.

If in his first works Becheri sought an authorial dispersion conceiving the case as an element of creation declined in blind gestures (Donner à Voir, 2004) or uncontrolled (Shining, 2007), in the latest works the manual (even digital) presence of the artist, an index of intellectual progress similar to the Évolution créatrice (1907) by Bergson, where he states that man should be defined as homo faber rather than homo sapiens. The consistency of the path, in addition to aesthetic concerns, comes to light due to the constant systematic unpredictability of the works, no longer limited in the creative act but now enlarged to the perceptive moment of the user, consciously shifting the artistic center of gravity: the object becomes art not in the moment in which it is made, but in the moment in which it is seen, as poetry becomes art not when it is written but when it is read.

In this sense, rather than to the countless and tantalizing visual references1, I would like to emphasize two points about the Sienese exhibition of literary-conceptual origin: the Ecfrastic aspect and the Christological aspect.

The need to scan the work through various interpretative means (memory, suggestion, perspective, …) places a constant translation value on the work itself and a further vaporization of authenticity. The ecfrase (from the Greek èk-phrasis, “out-describing”) in the field of art history has assumed aesthetic values ​​that often accorded, if not even competed, with plastic works, especially when the subjects were lost pieces or non-existent. In Becheri’s case it is the physiognomy that is the object of description by loading the sculptures and drawings of a literary eloquence achieved with a suffered and erosive téchne, the artist becomes the river that erodes with epic constancy and fatigue «… is the placid water, the water that ruins the bridges, which creeps into every crevice and laps every cove … gurgling in the basements and in the sewers »2.

The changing dynamism of his work is enriched by psycho-theological connotations in relation with the second location of the exhibition, a hall formerly the women’s lane of the pilgrim of Santa Maria della Scala. To clarify, the monogram of the Spedale with the scale surmounted by a cross3 comes to the rescue: the calvaric and transcendent path of the artist, although it appears immediate and spontaneous, is painful and cathartic, without however denying a thread of narcissism or sprezzatura, as suggested the same author in an introductory poem to his own exhibition. Rebalancing this Pindarian escape is the Pietas Carnis evident in the works but even in the artist’s character, a body abandoned in the arms of capricious Nature.

Becheri is Christ, but a primitive and autarchic, cannibal and romantic Christ, the Themroc4 of art.

[1] especially Rodin: with Figure in the landscape, 2017 Becheri seems to reconstruct a small Porte de l’Enfer, 1889. On the link between the hand and the divine, synthetic but effective D. JARRASSÉ, The hand of God or the hand of artist, in Rodin – Forma e Movimento, Ed. Ita Rusconi Libri, Rimini, 2002, pg. 213-214. 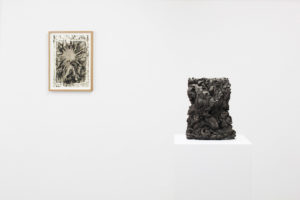 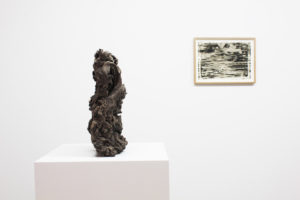 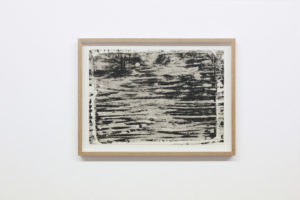 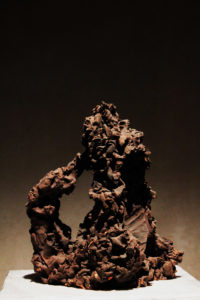