Aneta Kajzer: “It Must Be Bunn..

The conceptual art of Goran Trbuljak on display in...

The conceptual art of Goran Trbuljak on display in Bologna

The P420 gallery hosts, in Bologna, the works of the Croatian artist Goran Trbuljak (1948), with a solo show dedicated to him entitled 45 Years of Non-Painting, on view until April 2nd 2022.

The first room houses the works elaborated between the seventies and the eighties, while in the second there are the most recent works made up to 2021. The dialogue that Trbuljak operates with art, with its essence and with the mechanisms that regulate it, is present in all the evolution of the artist, and the works produced, if on the one hand they are characterized by being conceptual, on the other hand they show the concrete approach with the materials and the different techniques tested in order to be able to satisfy the requirements of speed and high productivity required by the current art system. As an artist from the East, he perceives the different consideration reserved for him compared to his colleagues from the West. Despite his work is innovative and original, it is the result of an intense introspective reflection, in which the artist’s soul becomes a mirror on which the tools of art coexist, transforming from an empirical form to a metaphysical essence. The works, therefore, are the outcome of a double act: the creative one and the conceptual one, created precisely through the working tools that bring with them the most spiritual form of art. This path is gradually accomplished in the work of Trbuljak, who carries out a continuous reasoning about the work and the role played by the artist.

In Sunday Painting, 1974-2014, he documents what he does, such as painting on a shop window from which it is possible to observe an easel with an empty canvas, thus forcing the shop owner to clean the glass the day after. The two matched techniques, photography and painting, support the performative use of color and action. The artist observes, chooses the object of his attention and begins a dialogue with it, an active, operational interaction.

This also happens in Monday Painting, 1974-1983, in which he paints only a part of the canvas, as if to subtract an idea, to diminish the action by reducing it to the essential. It is with the canvas, a white space on which to build, that Trbuljak weaves a series of experimental tests, such as painting the reverse, observing how the color expands on it and reaching it with the brush through a hole placed on the transparent glass that covers the surface.

The essence of art also takes shape through the palette, which becomes the conceptual meaning of painting. It represents the tool on which the artist mixes and chooses colors and consequently itself becomes a speaking, eloquent, material work, through which creative gesture and means are mixed, as for example in A place on the palettewhere there is no color (# 1), 2011-2015.

Nor less representative are the “compositions-sculptures” such as Small Composition XIII, 2020, made with brushes, palette and tools of each artist’s everyday life. Three-dimensional constructions around which the viewer can move by observing the different angles and the strokes painted on the canvas by the brushes condensing again the creative act and its self-determination. Although he wishes to detach himself from painting as the main expressive language, he recognizes its ability to represent the artist’s personality in its entirety to the point of identifying him: using brushes, in fact, he paints his initials on mirrored canvases with red and blue colors, the same ones used at school for the correction of the homework. The artwork becomes almost “an exam to be passed”, through which to obtain the due recognition but, at the same time, the tool with which to make oneself known. If the contemporary artist has such a desire, he must also live up to it by managing to satisfy what the market requires, the high productivity. This is why Trbuljak invents a mechanical easel, through whose mechanism the brushes bring different stripes of colors on the canvas, thus optimizing production times. An example of this are works such as Untitled XXII, from the series First easel painting, canvas in motion – fixed brush, 2018.

The creativity of the Croatian artist is also experienced through the Sentences, created between 1971 and the early eighties. They are A4 white sheets on which there are a few typed words addressed to the visitors of the exhibitions and which enunciate his reflections about art and how it is perceived by him. The form and the image are carriers of thought, of reflection between the existential dilemma of affirming one’s identity and the need to realize an art full of concepts and universality.

To accompany the exhibition, it is presented an artist’s book, in a limited edition of 100 copies, entitled From the self-ironic to the autosardonic (45 years of non-painting). 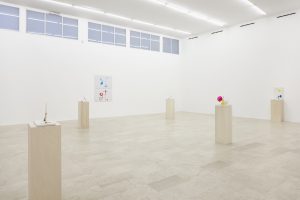 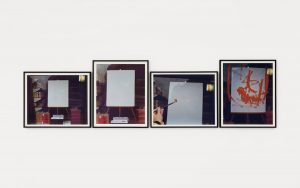 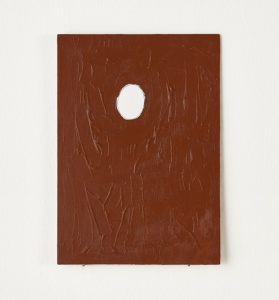 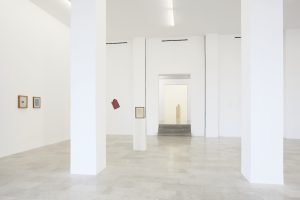