The polyhedric world of Tarin’..

The Floating Collection: an example of a research ... 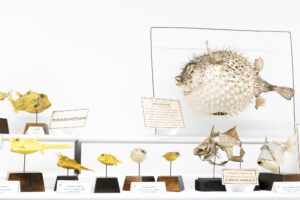 The institutional mission of a contemporary art museum can be identified in the conservation, promotion and enhancement of the heritage entrusted to it, to which is added, in the most commendable cases, concrete support for the artistic research of emerging generations. All these actions, not always adequately implemented by Italian institutions, are at the origin of the group show The Floating Collection recently opened at MAMbo. The project aims to revitalize the city’s cultural heritage through the contribution of six artists (Alex Ayed, Rä di Martino, Cevdet Erek, David Jablonowski, Miao Ying and Alexandra Pirici) invited to create completely new works inspired by the suggestions of the city museum collections. The exhibition, curated by Lorenzo Balbi and Caterina Molteni, imagines a “floating collection” in which the different styles, techniques and approaches that characterize the most recent contemporary arts converge with the aim of materializing not so much a reinterpretation of the objects of the historical collections, as well as the ideas and imaginaries that can emerge from their reconsideration devoid of the encyclopedic and cataloging parameters typical of the Western museum model. This approach focuses on the dual objective of demonstrating how artistic production can be a valid ally to understand our present by projecting it into the future and how much a management actively engaged in the instances of art in their making can activate a propulsive thrust for the advance research. 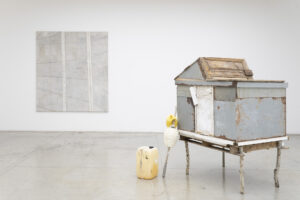 The exhibition opens with a room dedicated to Alex Ayed (Strasbourg, 1989), who during his stay in Bologna focused on the collections of the University Museum System, which include hundreds of objects collected by the University of Bologna over the centuries for scientific and educational purposes. The artist, interested in the concept of institutional deposit as a cultural expression in constant tension between ideology and obsolescence, adopts the ready-made to activate the imaginative potential of decontextualized objects. On display we find a mysterious installation dialogue between Untitled (Fossils and Shells), 2022, a collection of shells and fossils closed to the visitor’s gaze because it is enclosed in wooden crates in an evident overturning of the canonical concept of museum display and Untitled (Coop), 2020 -2022, an equally enigmatic structure that brings to mind a fishing stilt house with all the openings inexplicably walled up. More directly linked to his experience in the city, the Sun Drawings series, a framed presentation of some strips for heliophanograph from the Museo della Specola in which the traces of solar radiation and those of human intervention are superimposed and the Table of colors of the eyes by R. Martin and B.K. Schultz, 1930, taken from the Anthropology Collection of the Alma Mater Studiorum, a device used to catalog the colors of the human iris from a racial taxonomy perspective, whose semantic tendentiousness is highlighted. 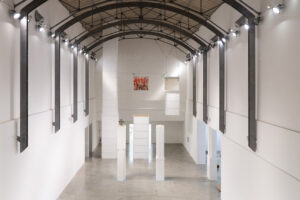 Cevdet Erek (Istanbul, 1974) experimented with the large space of the Sala delle Ciminiere, for which he conceived Columns of curiosities, 2022, a site-specific architectural installation of patinated plaster towers, one of which is surmounted by a cast from the XIX century of the lost cross of Varignana (IX-X century) preserved in the Medieval Civic Museum of Bologna, which evokes the medieval custom of using upturned classical columns to support votive crosses. The artist solved the complex problem of managing the room, which due to its width and height constitutes at the same time an opportunity and a challenge for all the exhibitions hosted inside it, reflecting on the idea of ​​the column as a modular element that unites the city panorama, typically punctuated by arcades and towers, and the industrial architecture of the former bread factory where MAMbo is based. The regularity immediately suggested by the ability to camouflage the modules in space is fragmented in a cadenced rhythmic discontinuity that creates a further connection with the museum environment in the implicit convergence of the idea of ​​a column in that of a pedestal. 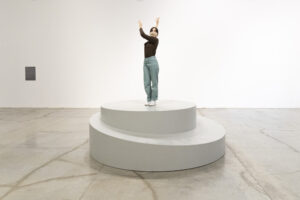 The exhibition continues with the intervention of Alexandra Pirici (Bucharest, 1982), Romanian professional dancer and choreographer, known for staging public actions, gestures and sculptures that lead to re-evaluate the narratives of history and urban space, nature and digital imagery. The artist, whose performative action Encyclopedia of Relations (2022 – in progress) has been included in the exhibition The milk of dreams curated by Cecilia Alemani for the 59th International Art Exhibition, investigates the role that a collective body can play in facing the power structures by assembling groups of performers, defined by her as living sculptures, which act, move, move and sing without adhering to any narrative plot. In the exhibition at MAMbo Pirici proposes a version for two interpreters of the Re-collection performance (2018-2020), structured as a “living” collection of real and fictitious artworks that are materialized and evoked without interruption by the gestures and voices of the two performers who take possession of the space starting from a central pedestal-stage. The absence of labels and classifications involves the viewer in an intuitive and emotional recognition that transcends any passive attitude to become co-creation. The inclusion of this work confirms the intelligent curatorial intuition of Lorenzo Balbi, already evident in the presence of Bonjour by Ragnar Kjartansson in the exhibition AGAINandAGAINandAGAINand (2020), to offer a varied recognition of contemporary expressive languages, which are not all equally valued in the most canonical institutional contexts . 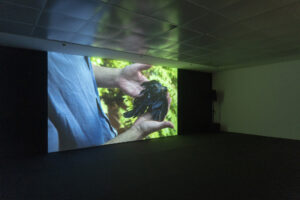 Rä di Martino (Rome, 1975) in the Moonbird video sketches a poetic portrait of Amedeo, a botanist mentally prisoner of his naturalia collection and of the frescoed images on the walls of his luxurious decadent residence, in which we could perhaps read a personification of the collector tout court. The soundtrack, composed by Mauro Remiddi reworking sound samples of ancient musical instruments from the International Museum and Music Library of Bologna, marks the passage of the protagonist’s life from an almost phobic routine to the chaos triggered by the appearance of a fantastic bird, which unhinges his habits by transmitting its own vitalistic unpredictability. For Amedeo, getting rid of starvation means becoming aware of the reality that surrounds him again and exploring his garden as if he were seeing it for the first time, but also getting lost in his hedonistic passion until disappearing between the lawn and the sky in an attempt to reach the object of his desire. 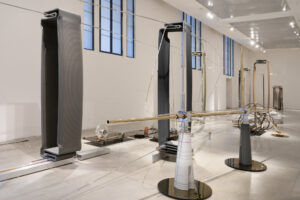 David Jablonowski (Bochum, 1982) reflects on the sculptural value of technological objects and on the evolutionary processes underlying their constant updating in terms of structure, material and software, which he understood as specific cultural indicators. The artist challenges the concept of innovation (apparently unassailable mantra of technological consumerism) through the creation of articulated installation systems in which high and low technology tools manage to coexist by finding coherent modes of interaction that undermine the linear evolutionary paradigm by fragmenting it into infinite hypothesis of temporal coexistence. On display we find, in addition to a series of existing sculptural works, a new production entitled Geo-fenced commodity futures (renewable, traced, hard) I-V, a walkable environmental installation in which the composition of diffenent materials and objects evokes an assembly line or tracks of a freight train, whose mysterious consequentiality is intuitive, but precluded in its internal logic to the observer. 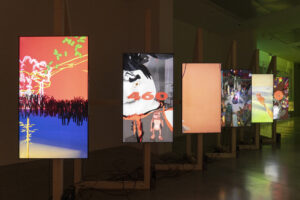 Miao Ying (Shanghai, 1985) concludes the exhibition with Surplus Intelligence (2021-2022), an animation developed by a video game software set in the village of Walden XII, an imaginary para-medieval kingdom of the latest generation in which a population of cockroaches is punished or rewarded by members of the dominant caste based on the behavioral score obtained. The work assembles in a suggestive digital aesthetic historicizing cues taken from the architectural and museum testimonies of the city and ultra-contemporary suggestions, such as bit coins and big data, which are assimilated to the former as archaeological finds of our now extinct contemporary world. The plot, developed by an Artificial Intelligence trained by the artist through different readings selected by her, connects the past forms of surveillance, such as underground isolation cells and the system of papal indulgences, with the current telematic systems of mind conditioning and data collection. With an ironic and playful approach that does not dilute the existential scope of reflection, the work immerses the viewer in the nonsense of an ideologically surreal world in which nothing is off-limit if one knows the way around the restrictions, which turns out to be disturbingly similar, precisely in its most contradictory aspects, to what our present is preparing for the future. 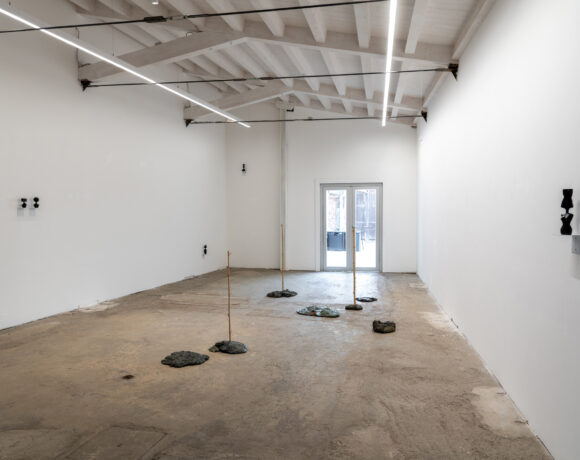