The Rolling Stones. It’s only rock and roll ...

The Rolling Stones. It’s only rock and roll (but I like it)

There is a sentence, very simple and trivial if we want, taken from a film that makes the idea of ​​a generation devoted to the necessity of art. […] “Years will pass and politicians will never make a dick to make the world better, but around the world boys and girls will always have their dreams, and they will translate those dreams into songs.” From the movie “I love radio rock” by Richard Curtis

It is on a hot summer day that struggling to go out, as the most famous rock band on the planet, is with that rhythm and intensity that the Bologna gallery Ono Arte Contemporanea decides to pay homage to the Rolling Stones through the fifty shots of two British pillars of photography, Michael Putland and Terry O’Neill with the exhibition “The Rolling Stones – It’s only rock and roll (but I like it).

It is between erotic disorder, intimacy and transspiring aggressiveness that the fusion between the fifties rock heritage and the blues have met in the art of the Rolling Stones. A group so mythical that it is difficult to express in words the greatness of an artistic work so viral and capable of overwhelming and sowing proselytes decades later, almost one feels obliged to bow to such a precious and global history. A rock that has shaken hormones and consciences, a rock that has given its soul to the devil because with the respectables we have cleaned the worn sole of shoes. The Rolling Stones shoes are shoes that have left indelible steps in the hearts and ears of millions of fans, shoes that have jumped to the rhythm of a bass ride on the most legendary stages. Immortal and fearless shoes.

Terry O’Neill has immortalized them on the streets of London, the “Swinging London” giving us some of the most famous images of the group in what we can define as the original and most beloved lineup, with Mick Jagger, Keith Richards, Charlie Watts, Bill Wyman and now legendary Brian Jones. “Everywhere you looked in London, something was happening”. Thus O’Neill himself defined that hot, magmatic, dense, and feverish period that has been and is seen as one of the most prolific artistic periods in history for generations to come. 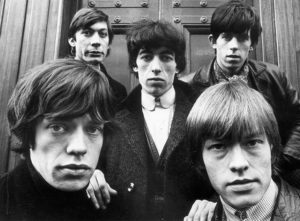 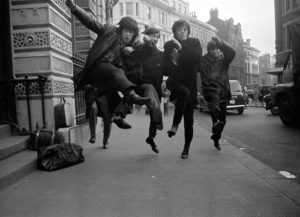 A group, the one matched by the fleshy and androgynous lips of Mick Jagger, who in the 60s still wandered the streets of the British capital in search of its own specific aesthetic identity, and certainly not second-rate element, which was “rivaling” “with the reassuring and peaceful Beatles. The Rolling Stones between demonic desires and an expanded, outrageous, courageous sexuality, we have chosen (or have been chosen) a seismic, telluric art, capable of shaking even the most difficult and static skeptic. Their records, one after the other, were a means of authentic and original conversion to wild and unbridled pleasure. An implacable but terribly sincere libido, the healthy bearer of an eager and bubbly generation.

It was in the following decade, in all the seventies that instead another teacher like Michael Putland managed to capture backstage, party and performance, the identity that is now formed is firmly established, determined and gritty of the group. If the Beatles stopped playing live in 1966, the peculiarity of Rolling Stones was certainly to have given enamel and strength to their being through live performances. And it is so still today.

The decade of the Seventies revealed and demonstrated the power of a musical group devoted to a single faith: that of rock, and the shots of Putland, testify to the greatness of an era, an atmosphere, a climate where the myth could resist and laugh in the face of the precariousness of success.

Between a pause delineated by the smoke of a cigarette, between guitar strings and microphones, between skimpy outfits and crowds invaded by sweaty and fanatic bodies, smiles and extravagant passions, the unbridled eroticism of rock becomes myth, in the shots in white and black fixed in the story by the eye of Putland, an artist who knows music legends well, just to remember, from his lens have passed the likes of Stevie Wonder, David Bowie, Ladies Tea Party, Annie Eve, The Clash, Tom Waits, Bruce Springsteen, Bob Marley, Frank Zappa, Van Morrison, Bee Gees, Nina Simone and many others.

Also in this exhibition the Ono Arte Contemporanea puts on stage the B side of vinyl, the most intimate, secret, the most private and unpublished, the less known and more enjoyable, that’s how we are offered the opportunity to spy history from a timeless gap, so I would define the medium photographic, an instrument that thanks to the skill of passionate teachers like O’Neill and Putland offer us the unveiling of myth, of precious secrets, of whispered notes, beyond the human ability to understand, there, art for art helps the legend to remain such.