The Rolling Stones. It's only .. 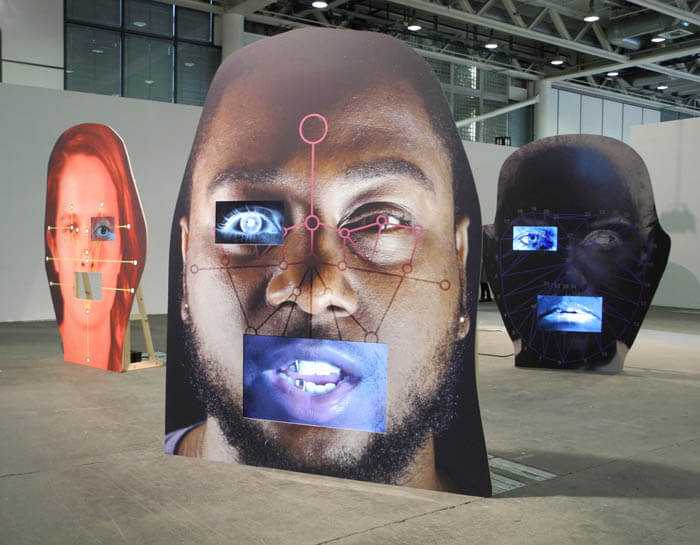 The 47th edition of Art Basel Basel – authoritative mother of fairs in Miami and Hong Kong – has confirmed great vitality in each section and power of attraction for the merchant offer supported by cultural initiatives. As usual, many visitors; 286 galleries, all of international importance, with new entries from France, Holland, Switzerland, Germany, USA, Mexico, South Africa; more than 4,000 artists in exhibition with works of high quality, which recorded even high sales; fifteen the stands of Italian galleries with various artists, by Jannis Kounellis to Pier Paolo Calzolari, Gilberto Zorio to Emilio Isgrò, Ettore Spalletti; not to mention the ubiquitous Burri, Fontana, Manzoni, Melotti, Vedova, Merz, Boetti, Castellani, Pistoletto, Paolini.
The pavilion of 16,000 square meters reserved for Unlimited, for the fifth time wisely organized by Gianni Jetzer (curator-at-large at Hirshhorn Museum in Washington), set the record of 88 installations – paintings, sculptures, photographs, videos and live performances – that, for their oversized dimensions, could hardly be relocated or made in private settings and, even less, in normal display box. This gave the opportunity to the selected artists to give their best in ‘unlimited space’. Italians were three. Isgrò (supported by Parisian Tornabuoni Gallery) presented Encyclopedia Britannica (1969), a diversified, monumental series of 24 volumes, deleted with aesthetic and conceptual rigor, enclosed in an elegant series of plexiglass cases placed on a long white base: an anthem to the human word and universal knowledge, with the intention not to destroy, but to preserve the memories and knowledge behind every civilization. Kounellis (Sprovieri, London) in Untitled (2014) has assembled torn blacks coats hanging on protruding knife blades and newspapers of the month in which he started the work; while in the center a beam-iron pillar, partly covered by similar garments, reinforced the haunting spell: magical and dramatic vision of the alienating condition of our time, marked by mass migration, xenophobia and religious wars. Zorio (Lia Rumma, Milano / Napoli) has revived Microfoni (1968), an essential technological-linguistic “representation” (unusual for the author) revealed through the interaction with the public invited to speak. And the voices, first amplified with an echo effect, were slowly dispersed in the air or covered by those of subsequent interventions.
Several galleries active in Italy have exhibited, in combination with other foreign, visual operators from different countries: the Argentine Pablo Bronstein and the Brazilian Tunga (Noero, Torino), the Portuguese Pedro Cabrita Reis (Magazzino, Rome), the South African William Kentridge (Lia Rumma, Milan / Naples), the Israeli Ariel Schlesinger (Minini, Brescia), the American Sol Lewitt (Artiaco, Naples), the Belgian Hans Op de Beeck (Continua, San Gimignano / Beijing / Les Moulins / La Habana).
Among the works of more spectacular and emotional impact, the six giant post-human faces (2014) painted by the American Tony Oursler (Lisson, London), made artificial wirh digital and virtual animations graphics in the eye and speaking lips, but without voice; the video projection, sound and figural, Notes Towards a Model Opera (on three screens) by Kentridge (Lia Rumma with Goodman in Johannesburg and Marian Goodman in London / Paris / New York) with a strong and articulated ideological value, this time inspired by the cultural Chinese revolution; the Mimed Sculptures (2016) by Davide Balula (Franz Elbaz, Paris and Gagosian), in which living mimes, escaped from their pedestals, positioned themselves with movements linked to known contemporary artists sculptures; the unstable accumulation of air bags hanging from red threads of the Japanese Chiharu Shiota (Templon, Paris), objects of personal and collective experience that evoked in the visitors memories of the past; the media metal library (2013) by French-Algerian Kader Attia (Lehmann Maupin, NY and Nagel, Berlin) related the Eastern and Western cultures, demonstrating how nationalism and Eurocentrism continues to fuel the feeling of fear. Deserve to be mentioned the refined conceptual paintings in black and white by Joseph Kosuth (Sean Kelly, NY); the minimalist purity of Tracey Emin’s room (Hufkens, Brussels; Lehmann Maupin, NY; White Cube, London), given by the harmonious combination of intangible colors, neon lights and reflective sheets; the White House by Ai Weiwei (Neuger and Riemschneider, Berlin) which evoked in a critical way a residence in southern China, with exhibits of the Qing Dynasty as cultural-anthropological ready-made, combined with wooden elements devoid of historical identity; the austere room, empty and dark seeds, staged by Elmgreen & Dragset (Helga de Alvear, Madrid), which, thanks to the beat at regular intervals of the gavel of the auctioneer, reproduced, with ironic and deconstructive aim, the institutional site in which the creative object becomes good. 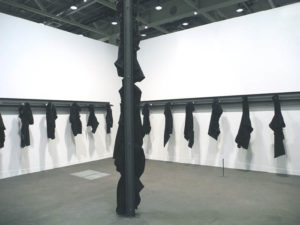 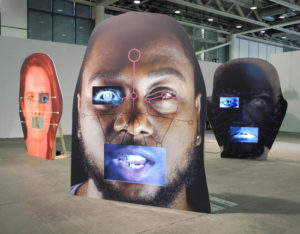 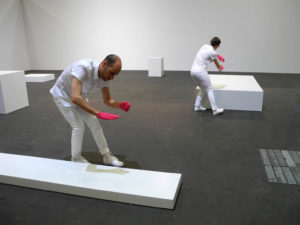