Confidence in the uncertain: S..

The surrealist Santiago Ribeiro is preparing a new...

The surrealist Santiago Ribeiro is preparing a new exhibition in Portugal after the pandemic, while a video dedicated to him is viral on the web

Santiago Ribeiro has exhibited all over the world, carrying out his project called “New Surrealism Now” which exalts the surrealism inspired by Max Ernst, with great success. The next stop is scheduled in Evora, Portugal, the land that gave birth to the most famous contemporary surrealist artist in the world, and a UNESCO World Heritage Site.

This is Ribeiro’s first exhibition after the pandemic, scheduled for the end of April. The initiative is from the company MatosCar, an automotive group present in the Portuguese cities of Guarda, Fundao, Castelo Branco, Portalegre, Evora and Beja. The exhibition will be permanent because the entrepreneurial group has decided to buy about a dozen works, including the painting “Metropolis 5000”, a work that is currently in the United States where it was exhibited in New York at the Artifact Gallery.

Ribeiro’s art greatly attracts the public, experts and not: his little pink men who represent the automatisms of our mind, the confused thoughts of the unconscious, ourselves without free will and the will to do good, are a catalyst for those who look, especially in this historical moment, where we are intolerant to the restrictions due to the health emergency. In relation to this situation, a video made by three Italians, which is having great success not only in Italy but also abroad, and which has almost 100,000 views on Instagram, can help to better understand Ribeiro’s surrealism and its surprising implications.

In fact, surrealism can be a valid ally of Christianity, as it shows us what it could be if we totally free our subconscious; we would be naked and blind men who hit the stakes of immorality and masochism. However, our will, our conscience and our freedom of choice come to our aid and make us truly free, since the human being is not just a biochemical complex.

The video, made by the journalist and art curator Annalina Grasso, the ASAS award-winning poet Vincenzo Calì, who composed a poem for Ribeiro entitled “Profluvi”, recited by the Crocitti Award 2019 actor Maurizio Bianucci, actor from Suburra and of various RAI fictions and theatrical pieces, wants to be a way to disseminate art in an original and immediate way, letting the question settle in our minds: can we look at the pandemic, the changing world, in a different perspective? How many times have we thought about releasing our impulses? We are educated, even cultured, but emotionally are we “fruitful” or sterile? One wonders: why does a video dealing with art achieve 100,000 views on Instagram in a short time? Because art creates the world a second time and in particular, the surrealist one, suggests that if the world were clear, as Camus said, art would not exist.

What does Santiago Ribeiro’s art really show us? First of all, it makes visible what it is not, in this case the unconscious, the automatisms of the mind, the jams, the thoughts that run too fast, the confusion, the desire to free oneself from any inhibiting restraint. It also makes us reflect on the meaning of free will, will and how we should understand our mind. Ribeiro implies that the mind is not a simple set of biochemical functions of the brain, but something more complex and wonderful, which ignites the ability to be visionaries, to imagine consciousness not as a product of the brain in spite of what scientific reductionism says. which, on closer inspection, has little scientific knowledge.

In fact, it is impossible to reduce thought and consciousness to matter, like a work of art to the colors that compose it: in this sense, Ribeiro’s little men without eyes and words are configured as the beings that we could be if we only followed our impulses, to wade through it would be confusion and darkness. We would no longer take into account life, the environment, relationships, their biographies and experiences, as well as genetics.

Ribeiro’s art asks us if it is the brain that tells us what consciousness is or vice versa and leads us to consider similarities that can exist between medieval art and surrealist art: the entire content of the life of thought needs to be expressed in many figures it is a typical aspect of late medieval art, and in this sense the video on Ribeiro brings to mind Vico’s words about medieval art, considered an art that harks back to the heroic barbarity of the Homeric age; it is the motif of the ancient circle full of desolate passivity that returns in Goethe’s famous expression “development as an ascending spiral line, in which the past returns, but always a degree higher”.

Ribeiro re-emerges the memories of the mind in a confused way representing suffocating spaces where they could be consumed or imagined to consume, barbarism in a desolate but attractive scenario. However, if in the Middle Ages the world seems larger, dominated by a deep sky, in the restless world of the Portuguese artist every thought is turned in on itself or at most turned towards the Earth. Ribeiro tells us that our history is small, human beings, who do not aspire to the great History, to an infinite world, to the acceptance of the mystery of life, are little men who do not know where to go, slaves to their worries, intolerances, ideologies, indoctrinations. 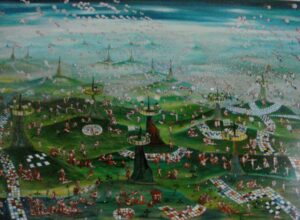 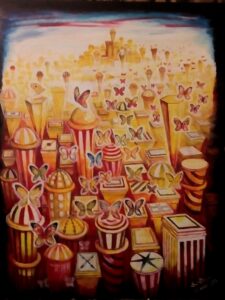 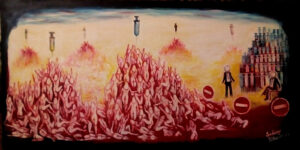