Jesse Darling. No Medals No Ri..

Time and memory, history and ecosystem in the rese...

Time and memory, history and ecosystem in the research of Ibrahim Mahama

Ibrahim Mahama (Tamale, 1987) is the Ghanaian artist winner of the 2021 Pino Pascali Prize – 23th edition. In his research, the reflection on time and the one on memory are combined with a vision of art as a revolutionary means capable of activating a change of historical and social significance. In a highly globalized society, full of contradictions and ambiguities, Ibrahim Mahama’s installations act as material and cultural paradigms with a relational aim able to manifest a semantic energy which acts into and on present time, entering into a relationship with the community.

Through jute sacks, for example, the artist creates aesthetic and symbolic systems that convey the histories of the world, such as real and symbolic stratifications of the events of those who have handled, used and abandoned these material-objects. The site-specific installation Voli-ni, into the spaces of the Pino Pascali Foundation, in Polignano a Mare, is linked to a careful reflection on the dynamics of trade and on all the implications related to work and export processes. In this path, the working materials take on symbolic connotations within a broader investigation on the concrete and virtual spaces of commercial exchanges, systematizing themselves in a group of tapestries that allude to the fragile economy on which the world equilibrium in contemporary history is placed.

Social structures, migration processes, the dynamics of work and globalization are placed at the center of a discourse that becomes universal. A multitude of histories leaves a deep trace within a process of artistic exploration that works on the political and cultural implications of the used materials, converting them into narrative artifices. Different places become part of the same geography which, through art, can lead to a collective reflection on existence and on our transience in this complex ecosystem.

The artist’s research is closely connected to the events of the colonial and post-colonial history of his homeland, but it is also able to conceptually extend itself gaining a symbolic and universal significance. The topics of crisis and failure, work and market, memory and historical reflection, sense of community allow us to collect fragments of the material history in progress, transforming its destiny, and materializing it into a complex and global narrative conjunction.

Thus, a reflection on historical and ecological regeneration can start from the observation of the brutalist architecture present in Ghana, in particular analyzing a building that became home to a colony of bats during the period of neglect following the military coup d’état in 1966. Animals become an essential symbol for conveying the themes of adaptation and re-creation of ecosystems. Thus, the artist choses these natural species in order to create his collages, combined with archive documents, notes and drawings by artists, in a process of iconic and intellectual research.

The suggestive site-specific environmental installation Lazarus has been instead built inside the former church starting from materials related to production and trade. They are materials still soaked in oil, as they were used to cover perishable goods during transport. The installation highlights, once again, the paradoxical condition of bats, animals forced to constantly recreate their territory due to anthropogenic intervention oriented to production processes.

Thus, we can observe the contradictions of the interrelationships between species within a fragile ecosystem, which is constantly determined under the force of the human action and aspirations. The research of Ibrahim Mahama gives us a significant observation of the historical, sociological and environmental processes of contemporary times through aesthetic systems that can enter into relationship with the other, questioning, overturning perspectives and infrastructures of thought, integrating multiple visions of the same history, freeing it from the pressure of the narratives of the dominant culture. The matter persists speaking for the history. A precious object and symbolic trace of the process where the gestures, the voices and the words of the places we call “memory” can setting over time. 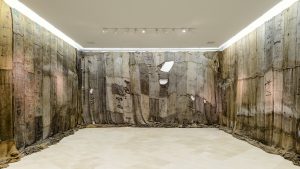 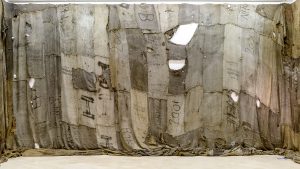 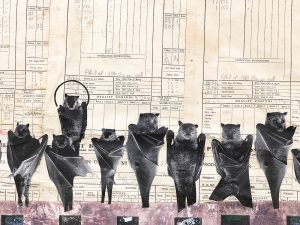 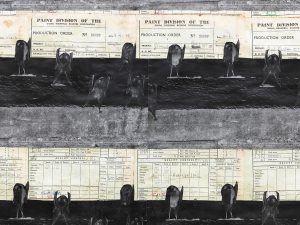