Born in 1976, the young Indian artist Tino Sehgal, born in England but raised in Germany, is not only a performer but also an orchestra conductor and a visionary. His innovative operation consists in recreating and shaping a real situation, in which he is an artist and at the same time a curator and a spectator. If it is true that “life presents itself as an immense accumulation of spectacles[1]“, then Sehgal has no choice but to trace and resume simple moments in which the viewer has only to enjoy the scene.

Tino Sehgal’s works go beyond the simple concept of performance, his are Constructed Situations, that is, a mixture of reality and what Borges defines as “unreality”, which is the very condition of art[2]. In his poetics, the artist selects any moment of any day and recreates an action, thus inserting a surreal and different from usual operation into the simplest everyday life. In the form of a challenge, the artist wants to understand the spectator’s reaction in the face of unusual events.

Think of The kiss (2007) presented at the Contemporary Museum in Chicago. During a normal visit to the US museum, suddenly the bodies of two dancers rolling on the ground merge into a series of “unique kisses” that celebrate the history of art – from Antonio Canova, Rodin to Gustav Klimt and Jeff Koons -, a tribute to the past sealed by a wind of contemporaneity, interpretation and originality.

Also in the same year, the performance This Success / This Failure takes place. A work that offers us a game of perspectives. Children are often criticized for doing something wrong, but who are we to say what is right or wrong? Well, Sehgal reverses the roles and in this performance it is the little ones who decide after listening to a conversation between adults, who is wrong and who is right.

The problem that exists in his works or rather in his creations is, however, only one: the lack of reproducibility. In fact, all of Sehgal’s works cannot be recorded or reproduced without his consent. He explains that what prompted this decision was most of all the desire to let the viewer enter directly into the artist’s eyes and intentions. Without filters or technologies. “I’ve never been passionate about technology and I don’t think technology can be more powerful than someone looking you in the eye.[3]“

It is the contact that manifests itself as the one and only protagonist in his art. The works are choreographies of bodies where Sehgal is the theater director: on the stage there is only us and the others. But what is the great risk of the contemporary art? One day he and his art can be removed. Is Tino Sehgal suffering from Athazagoraphobia? (I.e. the fear of being forgotten). The artist answers this question by confronting us with the idea that his works can be erased over time without ever being truly destroyed. They belong to everyone and nobody.

“Tino Sehgal was revolutionary in dematerializing art, making us reflect on what art is, on who creates it and who owns it. This project aims to push these ideas further[4]“, declared the curator Francesco Bonami in 2016 on the occasion of the retrospective dedicated to the artist at the Nahmad Projects gallery in Mayfar, London. The performance I am NOT Tino Sehgal, wants to reflect precisely on the salient points of the poetics of the London-born artist, examining the themes and messages. Bonami also states: “If Tino Sehgal’s works are ‘constructed situations’, I am NOT tino Sehgal will be an exercise in deconstructing this idea to see where it would end, if ever there was an end.[5]” The curator’s attempt is precisely to understand how far the permissiveness of experimentation and the art market can go.

And in fact, the question arises spontaneously: what role economic interest plays in Sehgal’s works? The artist usually carries out buying and selling operations using a handshake. Yes, there is no contract and only the presence of a notary is allowed, while the instructions to ensure that one’s per-formances can be reproduced are described only orally. If the only means of sharing and poetry will be the word as a sort of aedo 2.0, what is certain, however, is that Sehgal is not new to continuous attacks and bureaucratic controversies[6]. 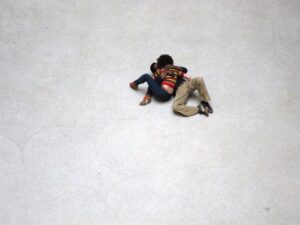 Still from Tino Sehgal’s The Kiss at the Guggenheim Museum, 2010. Image via Flickr 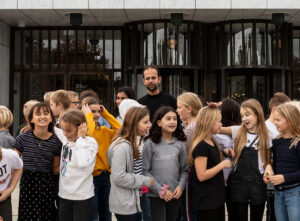 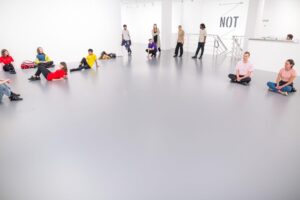 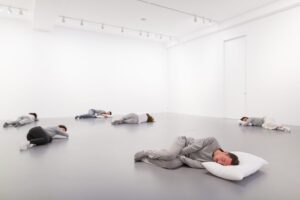 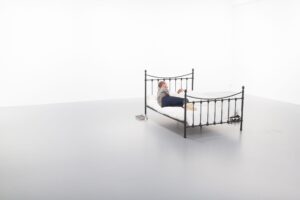