The Nelson-Atkins Museum of Ar..

Voyage / Voyage. An observation on the journey to ...

Travelling, as we know, lies in a strongly narrative spiritual sphere. In this regard, photographer Luigi Ghirri, in his book Journey to Italy (Viaggio in Italia, 1984), accompanied his shots with descriptions by writer Gianni Celati. Celati himself observes how their common journey is the result of a natural and intense observation of the world that absorbs us and makes us less apathetic, so that we could “feel crazier or wiser, happier or more desperate[1]“. According to this peculiar conception, the journey emerges as an observational story about the world, with a narrative character and an experimental perspective. A similar approach to this theme is that what emerges from the group show entitled Voyage / Voyage curated by Porter Ducrist and scheduled at Spazio In Situ from 26 June to 16 October 2021, featuring works by artists such as Bertille Bak, Simone Cametti, Giovanni De Cataldo, Luca Grimaldi, Pierluigi Fabrizio, Martin Jakob, Daniel Ruggiero and Thomas Wattebled. The artworks have nothing in common in terms of style or continuity of language, but they all present a strong desire to explore the subject with bold pieces of work born to broken taboos.

In several works of the exhibition, the landscape, a complementary element of the journey, becomes a subject in the hands of the artist who manipulates it to the point of challenging its ephemerality. The artist Simone Cametti is portrayed in a video with a sprayer on his shoulders while painting (using natural paint) en plein air a 2000 m2 area of grass in an area of the Gran Sasso National Park. Without further conjecture, Cametti invites us to reflect on color, which is the dominant element in easel painting and, in this case, becomes both a sign and a communicative tool, able to convey an idea, be it descriptive, symbolic or evocative. Similarly, Luca Grimaldi moves away from a foolish landscape duplication, presenting a vertical stratigraphic section of a painting representing a landscape. According to this aleatory hyperspace, the vertical sign is a visual fragment that evokes the color and the pictorial matter of the painting; this way, the artist reflects on the absurd mimesis between form and matter, thus creating a work which is very far from the classic representative methods. In contrast, Pierluigi Fabrizio‘s photographs take us back to a tangible reality, even if the cityscapes of the petrol stations have a surreal feeling. The shots could be accompanied by a statement by André Breton, where he gets lost in Paris and allows himself to be guided only by his feet, reaching random places with no apparent purpose “except for the obscure feeling that it is in that place that what will happen will happen[2]“.

Bertille Bak‘s video, on the other hand, is highly realistic, showing the posthuman character: the work is the result of a residency in the port of Saint-Nazaire and reflects on the mechanisms hidden behind the cruise industry. The artist stages a mechanical ceremony of the world with the automatisms of the assembly lines used in the construction of cruise ships, while also portraying future users-customers. Thus, through a continuous game of reappropriations and reinterpretations, of anonymous identities that overlap and now coexist with irony and serene provocation, he investigates the matrices of consumerist, social and economic revolutions.

Another reflection shared by the other artists in the exhibition, is the use of art as an instrument able to externalise creative forces and energies, in line with Gilles Deleuze’s view according to which “in art it is not a matter of reproducing or inventing forms, but of capturing forces[3]”. Giovanni De Cataldo presents a sculpture with a stinging impact, leaving us in doubt as to whether it is a sculpture celebrating a particular pomp. Afterwards, it’s clear that the work is instead characterized by a catastrophic occurrence: since it is a fragment of a guardrail from a company that carries out crash tests. It is proposed here according to an ironic strategy, and its primary use is denaturalized. Martin Jakob, too, makes visible the forces that “are not”, but that, at the same time, have the capacity to shape. He exposes the form acquired by the liquid plaster poured into a wooden crate during a journey that brought him in loco. With this work, the artist recounts the media circus of the journey, perhaps in order to demonstrate that the universe, but also the artworld, is Manichean: orders are opposed, nothing is determined, everything is antagonistic, and even the journey is devoid of rules and free of any aestheticising dialectic. Daniel Ruggiero is the creator of Urbangame, a Piaggio Ape repurposed to be a nomadic exhibition space and a host for artistic interventions. The artist, working on the artifice, designs a work characterized by playful and hallucinatory aspect. The minicar is surmounted by two doors resembling two wings, so that the work looks like a gadget in the hands of the artist-demiurge, producer of a silvered and playful object universe.

Lastly Thomas Wattebled‘s photographic work touches the lyrical, revealing a subtle ability to capture the romantic figuration of existence and its aleatory nature: the artist, indeed, performs a fleeting self-portrait. After he set the camera’s timer at ten seconds, he runs away and has his photo taken while moving away from the lens. The performative action reminds us that the photographic shot consists in halting the instant, capturing a moment elusive by nature, crystallizing it in a rapid movement, in order to share it and transmit it in the future. The artist depicts escape and its momentary blockage to give substance to the poetic beauty of this inexplicable conjunction, so bewitching that it compels us to escape far from our lives.

At the end of the exhibition, we reflect on how the curator managed to construct a seductive concatenation around the topic of travelling, born to a reflection and a coherent artistic selection on the theme of travel, which is enucleated from its rules. Moreover, in harmony with the agenda of the exhibit space, what is currently on is a coherent reflection of art as the manifestation of a pure idea – in some cases out of itself, in other devoid of symbolic content – but always coming from an acute reasoning towards reality and the nature of men. It seems, therefore, evident that the theme of the journey, thus developed, is a careful speculation on the nature of the human being, an occasion of inner discovery, as if to reveal ourselves “crazier, wiser, happier or more desperate[4]”. Such a conclusion might seem absurd to us! Perhaps not, because at the end of every journey, whether spiritual or geographical, we are always bordering with chaos. 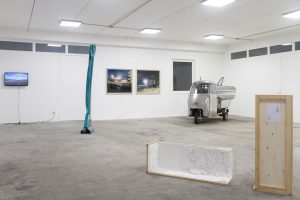 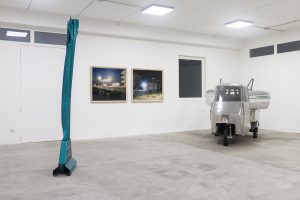 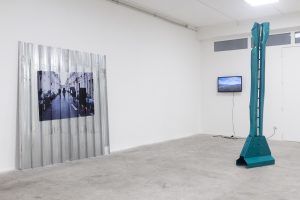 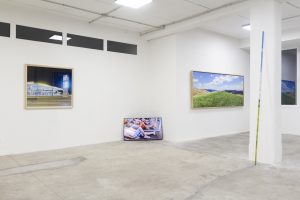 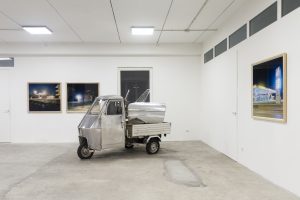 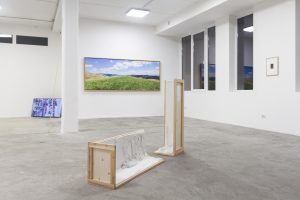 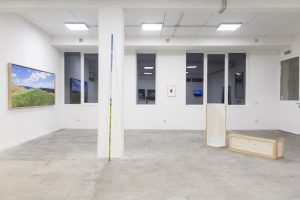