Where you can look at the sea: the new exhibition ...

Where you can look at the sea: the new exhibition by Piero Guccione

“I am a man who needs to look at the sea, with memory, looking at it having him there in a step, as I had certainly looked at him as a child“, Piero Guccione (Scicli, 1935 – Modica, 2018) in ​​1983 revealed to Giorgio Soavi, a critic who immediately recognized the poetic qualities of his art. After being honored with numerous awards and prizes (in 1970 Guccione created the painting The lines of the sea and of the earth, a finalist in 1988 at the Artist of the Year award, promoted by 120 Italian critics, in Naples, nominated in 1995 Academician in San Luca Academy) and having collaborated with artists of the caliber of Sonia Alvarez and Franco Sarnari, comes back today in the first post mortem retrospective dedicated to him: Piero Guccione. Painting like the sea, organized at the Mendrisio Art Museum.

In 120 catalog pages, ed. from the Mendrisio Museum of Art, his arts is documented with photographs and data sheets about all the works on display, introduced by the contributions of scholars and followed by apparatuses showing a selected bibliography and a selection of exhibitions. An enchanting exhibition to remember a great Italian artist. The 56 works on display, including oils and pastels, made from 1970 until 2008, are a variation of lights and shadows in which man is absent, but perceptible. An intrinsic comparison in his words, although never fully evident, is the plain of the canvas compared to that of the sea; if the first is a palpitating surface waiting to be swayed with flashes of color, the second is an imperceptible movement of space and time, in a motion of tumultuous serenity.

A striking example of his personal interpretation of the sea is the painting “Mare a Punta Corvo“, dated 1995-2000; the surface is streaked with slight ripples, it is not clear whether the sea reflects the shades of the sky or vice versa, the clear ones are clear and absorbed in its silent clamor. The dimension of light meets and clashes with the different shades of blue, in a relationship that smacks of pure perversion of color: “The absolute immobility of the sea attracts me, but it is constantly in motion,” said Guccione, addressing daily a challenge beyond the boundaries of his own vision of the sea. The rarefaction is the key point of his last works: there is an amazing sense of emptiness that makes the viewer hang suspended between concreteness and abstraction.

He recognizes himself as a painter in a tradition rooted in the realistic, figurative datum: “My painting today goes towards an idea of ​​flatness that contains the absolute, between the sea and the sky, where almost the color is abolished, and also the space. In short, a sort of flatness, but which, in some way, contains a given of absoluteness, of something that looks like nothing and that looks like everything“. It is his own painting that contains intrinsic contradictions in his conception, it is itself an oxymoron; what Guccione sought spasmodically, in fact, was an extremely personal form of reality, enclosed in the abstractions that pervaded his being. Even the writer Alberto Moravia took the essence of it well: “Piero Guccione does not illustrate figures and situations, but rather tries to reduce the illustrative reference as much as possible … he has put himself out of history, kept to the passion of all times and all places and only that ”. Therefore, to grasp the uniqueness of Piero Guccione means to observe his creations for a long time; precisely because, through his artistic offspring, he managed to tell who he really was. 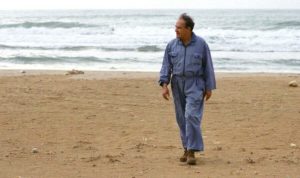 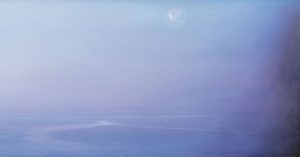 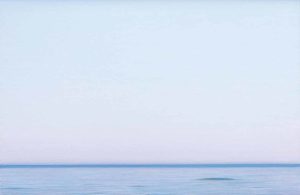