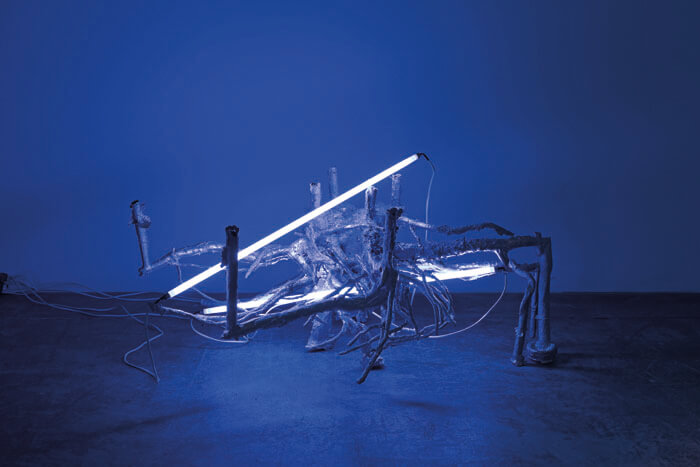 In the relativity that governs events by coordinating their causes, in the many consequent aspects, it is possible to glimpse the articulated complexity of reality. This develops like a dense network of interconnections of different nature that, interpenetrating, influence each other and feed each other. It is precisely the diversity of these agents and their combinatorial possibilities that constitute the most determinant datum on the outcomes of these transverse relations which affect the contingency of things and which therefore touch more planes of existence; biological, social, individual. Within a very polyphonic situation, where there are mutual influences to establish links, the function and conception of zeitgeber – in Italian “time donor” – is decidedly more multifaceted. Referring to ethology, it indicates a factor external to an organism, but able to synchronize the so-called biological clock with the change of the environmental context and, as already mentioned, it is an unconcept that today appears to be interdisciplinary. In fact, from a strictly social point of view, the zeitgeber can be represented by working hours, or perhaps by climatic conditions that dictate the timing of human interactions.

Now extrapolating it from any circumscribed field of investigation, wanting to draw a profile free from circumstances of kind, the exhibition ZEITGEBER curated by Andrea Tinterri, in the spaces of the BAG GALLERY until January 13, 2016, gives us the possibility to enter with the senses and the intellect in the personal paraphrase that elaborates the artist Carlo Dell’Amico. Thanks to an expository writing in line with the necessary reading rhythms of the present works, the exhibition, with the selection of more or less recent works, is able to immediately put the accent on the profound speculative activity, both aesthetic and semantic, that can be found behind the hosted works. Here, then, reproduced on offset plate supports – exploited by the artist since the nineties – images of strong communicability, where phytomorphic elements are in uncertain equilibrium on hexagonal bases, or accompanied by architectures of archaeological appearance. The dark pigmentation of these compositions highlights the realization genealogy already rendered, in part, visible by the stratification of successive successive passages, showing how he interacts with the generative phenomenology of the works. Continuing with the installations, we see roots – primordial vital unity – mirrored upside down, lifted up and immortalized within imposing frames, in turn divided by segments that, following the golden proportions, cut the space of the work and intersect its bodies. First of all, it is a cognitive overturning that causes the perceptive destabilization in the observer since, while the mind is busy reconstructing what it sees philologically, he is led to interdict his own awareness of time until it is assimilated to the chronological dimension inside work itself. Thus we are witnessing the commissioning of an investigation of time through space, the material element and the light. The latter – where present – is declined with the use of neon fluorescent blue, thus going to symbolize the light – the biological zeitgeber par excellence – but the lunar one, marking the complex of an engaging cosmic dimension. The concept of time, along with its phenomenal potentialities, continues to be the protagonist of the research here in the analysis phase, as it is the mutation that constitutes the key to privileged reading for the correct understanding of this type of work, a spokesperson for a a sort of immature transformation, deriving from the possession of an intimate chronological condition congenita to the works themselves, where even the use of geometric calculation, even in its exactness, escapes from its purely axiomatic value, inserting the whole into a transcendental atmosphere. This is even more emphasized by the relative contrast between heaviness and ascensionality that the roots and their positions produce, finally reaching the subversion of the Platonic idea of ​​time understood as a moving image of eternity – therefore of an immutable entity – because, in front of the production of Carlo Dell’Amico, we find ourselves admiring an immobile icon of the flow of becoming. 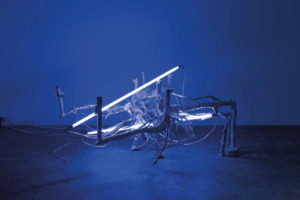