OPENING | The Future in Revers.. 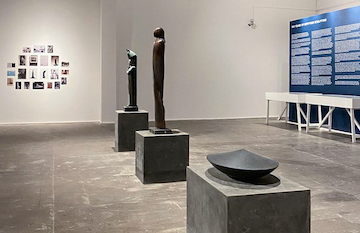 On view at MEEM GALLERY in Dubai until September 2020

20th century art is often associated with casting aside the traditions of the past for wild experimentation. We know the icons of those days, the urinals on the wall, the cut canvases, the abstractions. In Egypt, it was as if time stood still for centuries allowing the echoes of the ancient past to reverberate. That is until Mahmoud Mokhtar began to experiment with clay along the Nile, in his native village near the Delta. It wasn’t long before his talents were recognized and he was sent first to art school in Cairo and later to Paris for further study.

Mokhtar left an indelible mark on the Egyptian art world and inspired many others to follow in the path of art. His now famous, Nahdat Misr (Egypt Awakening) was exhibited 100 years ago at the Salon des Artistes Français in 1920. The stone sculpture is the Sphinx beginning to rise while a strong peasant woman stands beside with an arm around the Sphinx in solidarity. The granite sculpture references Egypt’s awakening to its sovereignty and independence from imperialist rule.

The sculpture also demonstrates a progression in Egyptian sculpture, taking a step beyond its former, ancient structures. The ancient sculptures always stood with one foot forward, indicating the potential for movement. Mokhtar shows the Sphinx in mid rise capturing the moment forever when Egypt awoke and began to stand on its own.

100 Years of Egyptian Sculpture: MOKHTAR – HENEIN – AGOP is a current exhibition at the Meem Gallery in Dubai. Looking back at the last century, the curator, Charles Pocock has chosen three Egyptian artists to represent modern contemporary sculpture: Mahmoud Mokhtar, the Father of Modern Egyptian sculpture, Adam Henein, possibly the most celebrated sculptor in his generation, and Armen Agop, whose international acclaim has brought Egyptian sculpture out of Egypt to be recognized on the international scene.

Mokhtar’s works contain potent energy of movement. When they stand, it seems that it is only for a moment before they begin again, their journey. The same is true for the bronze sculpture on view at Meem Gallery, Au Bord Du Nil. Like Egypt Awakening, the sculpture is a peasant woman performing a typical and life-giving task, retrieving water from the Nile. She holds the water jug and seems to pause only for a moment before she brings the water to her family. Her face is clearly confident. It is interesting to note that he chose a woman of his social status to represent with such nobility and dignity.

Adam Henein, who was perhaps the most well known sculptor in Egypt, passed away in May 2020. The sculptures of Adam Henein are smoothed as if they have been standing in the wind for thousands of years. Their features blurred, the intentions seem to have been forgotten many years ago. Their movements are caught in a lifetime between abstraction and representation. The figures, often pharaonic, or of women, animals, and birds, are a call to Egypt. They are playful and serious, sometimes complete abstractions and other times demonstrate simplified, androgynous figures, yet capture the essence of Modernist form.

His figure on view at Meem Gallery is also a peasant woman, nearly life size, the bronze figure stands erect, her left leg slightly to the side. Cast in bronze in 1969, Marie Nilus is titled after the Potamoi representing the River Nile. There is movement here too, but not potential movement, like the ancients or “now” movement like with Mokhtar, Henein’s movement is like past movement. His sculptures seemed to have lived and moved a long time ago, and now we see them at rest.

Armen Agop, the contemporary icon, who lives and works in Italy, is successful in merging the core of the ancient Egyptian art with contemporary concepts. He continues the tradition of investigating movement and stillness. His works do not represent a figure or a thing, nor are they abstractions of nature, but are their own essence and the essence of the artist combined into a new way of being. His sculptures are sober, refined forms that resonate a vital energy.

The work on view is Untitled 147. A black granite ellipse, poised on an axis, with precision and perfection. Movement here is imminent. You expect the sculpture to move and in fact it does. If one touches it slightly the sculpture is freed from its stillness and begins to rock. The focus point being a slowly mounting point of optimism. Each of his sculptures must be observed from all angles, as it could appear to be a completely different piece from one side to the other.

The artist works with basic elements, like points and lines, to uncover hidden or new ways of seeing them. In spite of their contemporary aspect, his sculptures remind us of the essential qualities of ancient Egyptian art, like, simplicity, soberness, strong lines, and the sacred feel of it, combined with the nature of the desert, with its emptiness and depth and at the same time, clarity, and ambiguity.

Agop’s oeuvre demonstrates themes of optimism, and strength just like the icons before him. For the artist, who describes his creative process as a meditation, the results are a synthesis of his mind, body and soul.
-Anthony Ross

100 Years of Egyptian Sculpture: MOKHTAR – HENEIN – AGOP is on view until September 26, at Meem Gallery in Dubai.