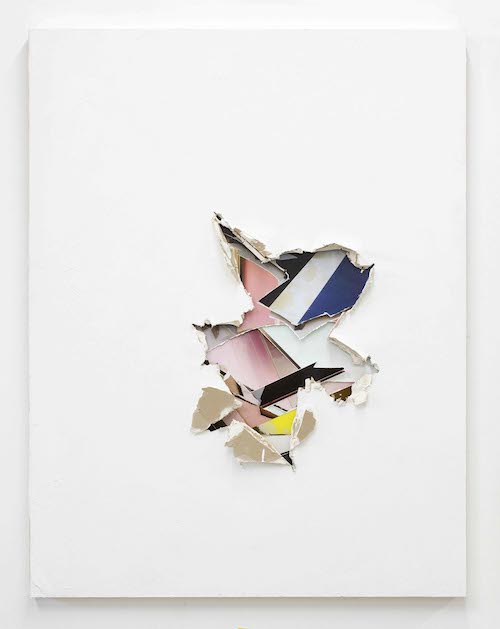 RIBOT is pleased to introduce ACE OF SPACE, the second solo exhibition by German artist’s Felix Schramm (Hamburg 1970, lives and works in Düsseldorf).

It’s now been four years since RIBOT made its debut on the Milan art scene, precisely with a feature on Schramm, whose intervention at the time created quite an impact both in visual and emotional terms: a Spatial Intersection where two big wood and plasterboard elements breaking through the latter-most wall of the gallery channelled a metaphorical and formal act of disruption.

Today Schramm is back to Milan, presenting a selection of his most recent Accumulation and Multilayer pieces, showing a further dimension to his ever – evolving research towards new visual and formal systems.

On the one hand Accumulation – a series whose exploration sparked in 2012, reaffirms the artist’s vocation for sculpture: these all – round compositions are built inside glass and plexy plates – acting as both display and protective cases for their contents.  The latter being either an attentive selection of raw materials and configurations – among them, miniature reproductions of sculpting solutions adopted by the artist or found objects, fragments and selected cut – outs complementing the composition game.

On the other hand Multilayer a series of large format collages created through the overlaying of plaster boards and photographic fragments, thus also accenting Schramm’s eye and interest for colour. While the pieces’ structure seamlessly melds with the gallery walls’ frame, the areas where the artist intervenes by breaking the plasterboard open an entryway into dimensions where the photographic fragments generate new viewpoints and compelling perspectives.

The varied nature of Schramm’s work calls for a slow discovery, without an eligible point of view. His captivating forms engage the viewer into coming closer, bending and stretching to better understand them.

The Special project also created as part of this exhibition, taps into themes underlying the artist’s entire body of work. In the small format Multilayer pieces, through a technique only suggestive of a disruptive streak, a new space is created bringing about further possibilities.

Felix Schramm (Hamburg, 1970, lives and works in Düsseldorf) studied Sculpture at the Accademia di Belle Arti in Florence and at the Düsseldorf Art Academy. He completed his studies in Tokyo (2000) and at Villa Massimo in Rome (2008). His solo and group exhibitions were held at prestigious international museums and galleries, including: Palazzo delle Papesse, Contemporary Art Center, Siena, 2003; Museum of Modern Art, San Francisco, 2007; Palais de Tokyo, Paris, 2009; Kunsthaus Baselland, Basel, 2014; Frac d’Alsace, Séleslat, 2014. Today, his works are featured in important public and private collections: such as the Berkeley Art Museum, Berkeley, The Museum of Modern Art, San Francisco and The Hort Collection, New York among many others.